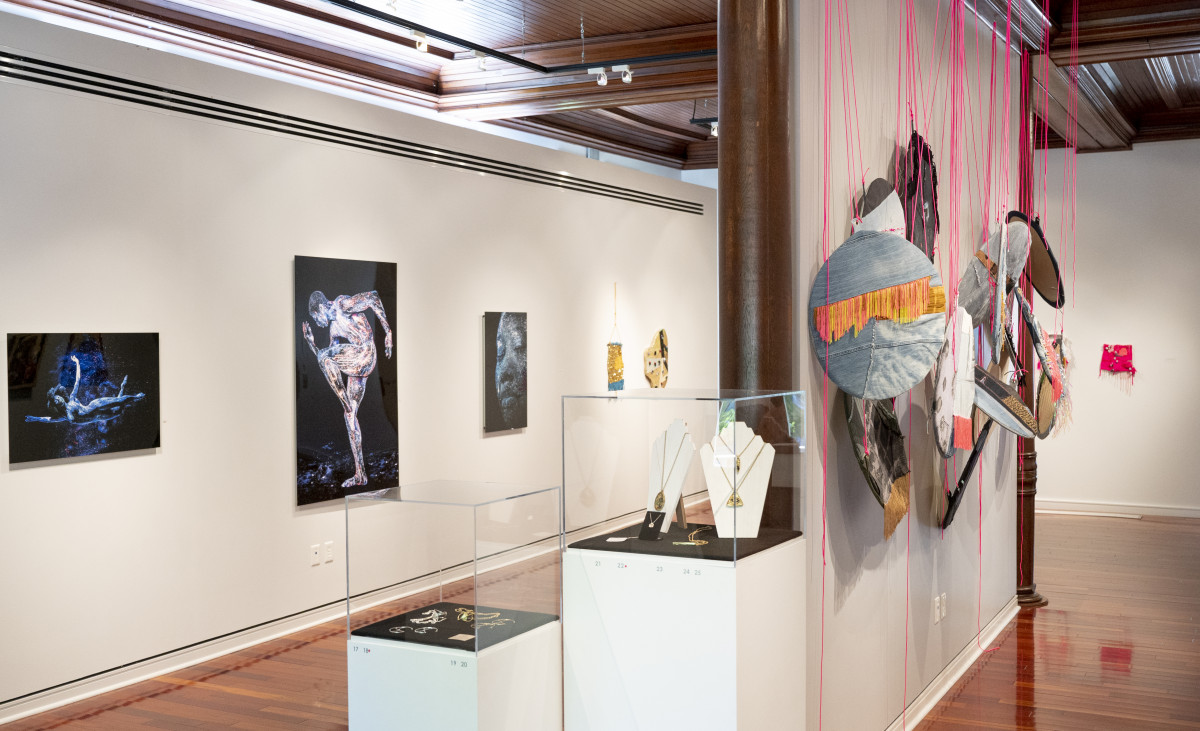 Art can not only help make sense of the world as it exists. It can also imagine new worlds and alternate realities.

In his work, Pittsburgh-based artist and engineer Mikael Owunna imagines realities where members of marginalized communities can be their authentic selves, without any inhibitions. In his art, Black and queer bodies transcend the realities, circumstances and positions they have been subjected to, and enter alternate realms of limitless and infinite possibilities.

“With my current series, I was really drawn to using African cosmologies as a way to transmit our notion of the human body itself to the cosmos, and then connecting each of these pieces into these myths and principles from African cosmologies,” Owunna said. “I feel like all of my work draws on my experiences as a queer African person.”

Owunna’s work has been featured in both national and international exhibitions. His work is currently being featured in the exhibition “All That Glitters” on the first floor of the Fowler-Kellogg Art Center, through Aug. 7. The name comes from the aphorism “all that glitters is not gold.”

Curated by Assistant Director of CVA Galleries Erika Diamond, the exhibition features work from six different artists, who each focus on undervalued themes and materials. Artist Samantha Wall draws on her Korean-American heritage in her golden drawings of the human body and rings by referencing the Korean celebration of Dol. Another featured artist, Yvette Molina, has paintings that envision new hybrid deities to combat realities such as racism. Tracey Beale’s jewelry shows the power of transformation by contrasting undervalued materials, like windshield glass, with gold and silver. Collaborators Steven Frost and Frankie Toan’s pieces utilize glitter and denim, which have become membership signals for queer communities.

In his work, Owunna creates an alternative vision of the Black body. The exhibition features pieces from his series “Infinite Essence,” which highlights different creation myths from the archives of the African diaspora.

Four images from the series are currently on display in Fowler-Kellogg, in addition to his dance short film, “Obi Mbu,” which he created in collaboration with film-director Marques Redd. For the series, Owunna worked with a number of other creatives as models, including dancer Derek Brockington, who performed last month in the Amphitheater with the Dance Theatre of Harlem.

Owunna came up with the series to counteract and contrast the pervasive negative images of Black people in the media. In his work, Black bodies are no longer depicted as sites of death and suffering. Rather, they become effervescent sites of magic, wonder, beauty and immortality. His images are evocative of the cosmos, the stars and the universe.

Owunna first starts out creating each image by hand-painting detailed patterns on the models’ bodies with fluorescent paints. Then, he gets out his camera.

Using his engineering expertise, he created a camera flash that only transmits ultraviolet light — a light that is not visible to the human eye.

“Then, in total darkness, I click on the shutter,” he said. “And for a fraction of a second, the model’s bodies are illuminated by these cosmic patterns, back to the origins of the universe itself.”

In his 2020 TED Talk, “Transcending the Body,” Owunna said that through the visible spectrum, humans have established systems of oppression — racism, anti-Blackness and homophobia. But, he said if we find a way to transcend what is only visible to the human eye, we can see the beauty that inhabits Black and queer bodies, and all other marginalized bodies.

Growing up as a queer Nigerian-American immigrant in Pittsburgh in the early 2000s, Owunna internalized the prevailing narrative in contemporary African culture that it is “un-African” to be queer.

“I grew up feeling a lot of tension between my sexuality and my African identity,” he said.

After being outed during high school, the news quickly traveled back to his family in Nigeria.

“When I was outed, members of my family in Nigeria told me that (being queer) is not of our culture, and that I had been corrupted by living in the West,” he said.

As a result of growing up in the United States, away from his heritage, Owunna experienced heightened feelings of uncertainty, leading him to question his position in African culture. From negative reactions to outright exorcisms, a clear message was being sent his way.

The message: One single body can’t be both queer and African.

“It put me into a spiral of anxiety and depression,” he said. “I felt like I didn’t really have the right to exist.”

However, Owunna found his voice: a camera. Photography and fantasy worlds provided him with a sense of escape and relief from his reality.

“The camera became a voice for me at a time when I felt voiceless,” he said.

After conducting his own research, Owunna came upon a transformative revelation — that queerness hasn’t always been socially stigimitized in African society. Prior to colonization, queer people once held some of the most coveted positions in African culture.

Through researching pre-colonial African understandings about sexuality and gender, he found that in traditional African societies, there was a concept of queer people as the “gatekeepers.”

“Because the creator was primordial, adrogonoyus Blackness, and queer people were seen as being able to vibrate both feminine and masculine energies, we preserved a special connection to the creator,” he said. “We were the diviners, the healers, the priest and priestess — the ones who stood at the gateway between the physical and spiritual worlds.”

This traditional understanding has been forgotten in many contemporary African societies.

“I had to do years of research to understand the foundations of the culture in ways that people living there don’t know about today, even my own family members who grew up in Nigeria,” he said. “It really shows how colonization can transform cultural memories completely.”

After attending college, Owunna spent six years documenting the experiences of about 50 LGBTQ+ African immigrants and diaspora across North America, Europe and the Caribbean for his series “Limitless Africans,” showing that the two identities don’t have to cancel each other out.

In addition to being an artist, Owunna views himself primarily as one of those gatekeepers, a preserver of traditional African cosmology and culture.

“A lot of my work touches on the way in which in traditional African societies, we have a spiritual mission and calling to be gatekeepers,” he said.

Owunna said that if he could tell his younger self one thing, it would be to remember that there is a spiritual purpose for him on the planet and that “your identity is a part of your spiritual mission.”

Through his work and accomplishments, Owunna is showing others that the gravities of life can eventually lead to limitless and infinite possibilities. 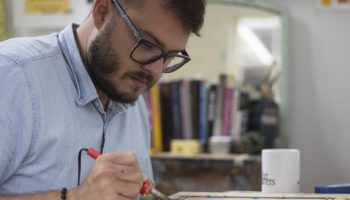