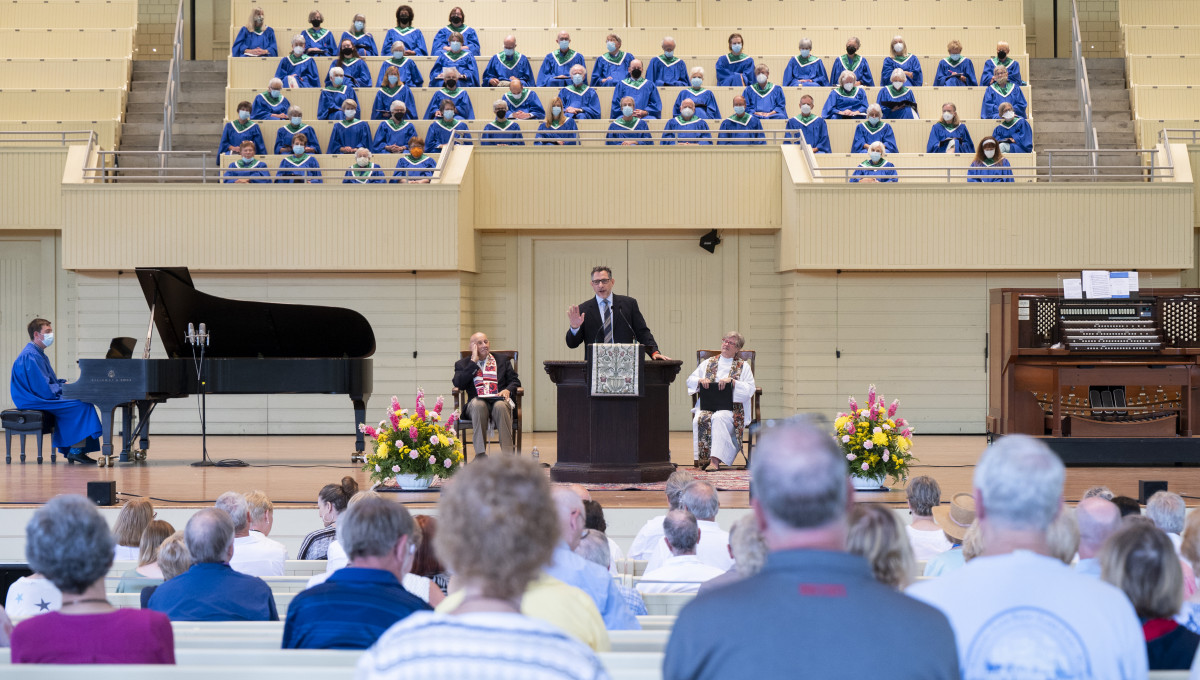 “We are living in a time of transition and instability, and music and the arts offer us wonder and a radical expression of hope. They help us balance our lives in the presence of wonder, awakening us to new possibilities,” said Rabbi David A. Ingber at the 10:45 a.m. Sunday, July 31, ecumenical service of worship and sermon in the Amphitheater.

His sermon title was “What a Wonderful World (This Could Be): On Mystery, History and God’s Redemptive Power.” The Scripture, read in Hebrew and English, was Genesis 18:9-14.

Ingber said he felt like he was at Yom Kippur services.

“I seldom preach to this many people, except on the High Holy Days,” he said.

He also felt the need to confess that he listened to Lyle Lovett on Friday, because Friday began the nine days leading up to Tisha B’Av, the ninth day of the month Av that commemorates the destruction of the first and second Temples.

“Jews are supposed to minimize happiness during this time. Live music is not the problem, and Lovett is kosher; it is the timing (of the concert),” Ingber said. “But I have a secret: I don’t feel guilty.”

The Hebrew word for “wonder” is “peleh.” It means surprise, “like the surprise of being itself,” he said, “Peleh is a core feature of a holy life; a good life is rooted in peleh.”

Ingber said there are two narratives in Chapter 18 of Genesis: the birth of Isaac, and Abraham negotiating with God over the fate of Sodom and Gomorrah.

Abraham greeted three visitors and provided them with a meal. As they talked after the meal, one of the strangers asked where Sarah was. Abraham told him she was in the tent. The visitor said that when he returned, Sarah would have a son.

Sarah was listening inside the tent.

“If we read Genesis carefully, this should not be news to Abraham, since God told him in Chapter 12 that he would have a son,” Ingber said. “Somehow, he forgot to tell Sarah this bit of good news.”

Abraham might have been reluctant to believe what God had told him, Ingber said.

“Maybe Abraham did not believe it, or maybe in his disbelief he tucked it away, so as not to hurt Sarah,” he said. “How often do we do that? She was old and no longer menstruating. Sarah had good reason to be cynical, excellent reasons to discount evidence to the contrary.”

Sarah laughed and mocked the news.

“Philosophers call this response the gift of risibility — to see and feel the incongruity in a situation and laugh,” Ingber said.

Sarah’s laughter was an internal release of the mocking of her dream of a child. As a woman dried up and defeated, she told herself, “It is not just me (who is old), it is also you, (Abraham).”

God asked Abraham why Sarah laughed. God interrogated Abraham, asking, “Is anything too wondrous for me? I will come back in a year, and she will be with child,” Ingber told the congregation.

There are 93 uses of the word “peleh” in the Hebrew scriptures. The God of the surprise and the unexpected interrogated Abraham and Sarah.

“God asked them, ‘Is the only place you find peleh is in nature? Really? Isn’t everything astonishing?’ ” Ingber said.

Faith begins when we see miracles all around, he told the congregation.

“Radical amazement is how we should live. What is routine today is yesterday’s miracle,” Ingber said. “For all our science and technology, what about peleh? The God who can’t surprise is no God.”

Rabbi Abraham Joshua Heschel wrote: “Analyze, weigh and measure a tree as you please, observe and describe its functions, its genesis and the laws to which it is subject; still an acquaintance with with its essence never comes about. … The awareness of the unknown is earlier than the awareness of the known. The tree of knowledge is built on the soil of mystery.”

Ingber pondered all that could happen in a year — births, deaths, new jobs, new relationships.

“The promise of wonder appeared when the Israelites needed it most,” Ingber said.

After they passed through the desert and the sea, “they sang and danced and said, ‘Who is like you, Adonai, you wonder-worker, you,’ ” Ingber said. “When we enter what we fear most, we enter the possibility of peleh.”

“Let go of certainty, and wait to see what God has in mind,” Ingber said. “Closed fists and minds are stalling redemption and cauterizing hope. Rabbi Heschel said, ‘Routine is resistance to wonder.’ ”

Growing up in an Orthodox Jewish home, Ingber learned a blessing for every activity of the day.

“We had our RDA — Recommended Daily Amazement. One of the stand-out blessings was after going to the bathroom, giving thanks for the working of the body, a blessing for being healthy,” Ingber said.

Everything would have been wonderful if the story of Abraham and Sarah was the end of Chapter 18 and the wonder of the natural world.

“What about humans and the societies they create?” Ingber asked. “The visitors are going to go to Sodom and Gomorrah. Abraham negotiated to save the cities even if only 50 righteous people were found. This is speaking truth to power in Jewish tradition, to agitate for justice. Abraham argues for all the people, not just the righteous. Peleh, mercy, is an extension of the call to wonder.”

Abraham was imploring God to stay open to God’s wonder, to not give up on human beings.

“We have the capacity to become different, Abraham pleaded, and God agreed,” Ingber said. “Abraham’s debate was rooted in our unimaginable capacity to change. There is a danger when wonder does not extend to humans.”

Ingber tells his congregation, Romemu, that worship does not begin until they leave the synagogue.

“In churches and synagogues, worship does not begin until people leave,” he said. “It is what we do with the wonder we have experienced, to see how wondrous other people are.”

At Emerson Hall on the Harvard University campus, the fourth verse of Psalm 8 is engraved: “What is man that thou art mindful of him.” It is a call to humility in the face of God.

Verse 5 in the psalm, which is not engraved on the hall, reads: “You have made him a little lower than the angels and crowned him with glory and honor.” This verse reminds us that everyone has stories and is capable of surprise.

“We have replaced peleh with Peloton. We let algorithms tell who we are,” Ingber said. “This induces peleh-free living.”

“My colleague was worried, but the seed he had planted took a long time to come to fruition,” Ingber said. “I gave my parents a run for their money. I dropped out of two rabbinical schools, and they must have wondered if I would come back. I learned to love other traditions, which led back to my own. Is anything too wonderful for my son? He will come back.”

Ingber affirmed that “God does not give up on us. But instead of surprise, we have labels.”

On his flight to Chautauqua, Ingber sait between an Israeli who was just returning from the Jewish olympic games and a woman in a hijab. A conversation opened among them which Ingber promised to talk about in another sermon.

He said the conversation was possible because peleh was present.

“We need awe and beauty and wonder to feed our souls,” Ingber said. “The first and second temples were not destroyed because of lack of awe, but because of ethical and moral mistakes.”

He shared a story, told by the ancient rabbis, about how the temples were destroyed. A man knew two people with very similar names — one was a friend and one was an enemy. The enemy was mistakenly invited to a dinner.

“The enemy asked the host not to shame him (by throwing him out) and offered to pay for the entire meal. Tragically, the host threw him out and shamed him,” Ingber said. “The man, in his shame, went to the Romans and the temple was destroyed. The story confronts us and shows us we need to honor the surprise in us.”

Ingber closed his sermon by inviting the congregation to sing “What a Wonderful World” with him. Everyone sang the first two verses, then he sang a verse that he had written.

“See the humans, sinners and saints, have the power to change their fates. And I think to myself what a wonderful world,” he sang, “this could be.”

The Rev. Natalie Hanson, interim senior pastor for Chautauqua, presided. Rabbi Samuel M. Stahl, former theologian-in-residence at Chautauqua, led the pastoral prayer and read the Scripture lesson. The prelude, “Festival Prelude, op.37,” by Louis Lewandowski, was played by Joshua Stafford, director of sacred music and holder of the Jared Jacobsen Chair for the Organist. The Chautauqua Choir sang “Behold! I am doing a new thing,” music arranged by Frank Pesci and words from Isaiah 43:-19-20 and Revelation 21:6. The choir was under the direction of Stafford and accompanied by Nicholas Stigall, organ scholar. The offertory anthem, sung by the Chautauqua Choir under the direction of Stafford and accompanied by Stigall, was “Hallelujah,” by Louis Lewandowski, with the words of Psalm 150 arranged by N. Lindsay Norden. After the reading of the Scripture lesson, Anna Womack, daughter of Hanson and the Rev. Paul Womack, sang the response to the reading “Yih’yu l’ratzon imrei fi” (May the words of my mouth). Stigall played “Allegro maestoso e vivace,’’ from Sonata No. 4, op. 65, by Felix Mendelssohn. Support for this week’s services is provided by the J. Everett Hall Memorial Chaplaincy, the Randell-Hall Memorial Chaplaincy and the Edmond E. Robb-Walter C. Shaw Fund.