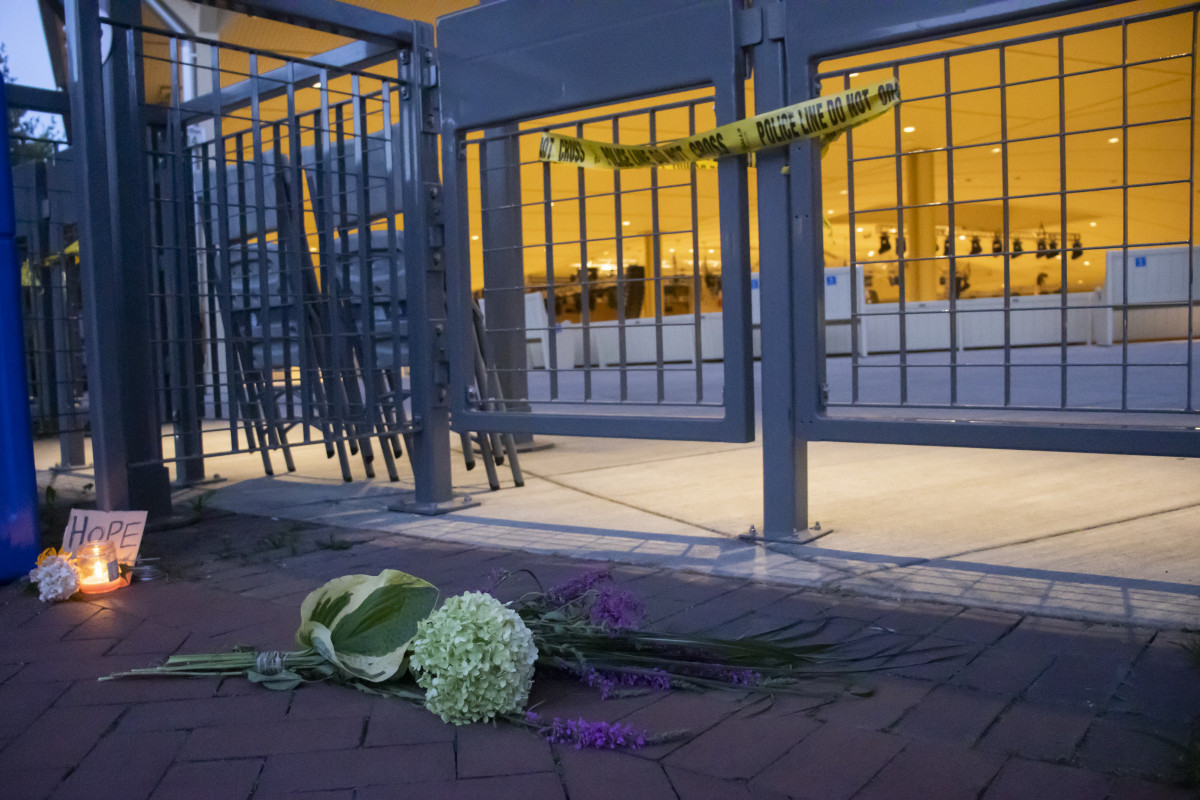 The world descended onto Chautauqua Institution Friday as an act of violence sent shockwaves through the community within the gates, and across the globe, as Booker Prize-winning author Salman Rushdie was attacked on the Amphitheater stage and  stabbed before a full audience.

Rushdie and Henry Reese, director of Pittsburgh’s City of Asylum, were set to give the Chautauqua Lecture Series presentation at 10:45 a.m. Friday morning. The two men were being introduced by Michael I. Rudell Director of Literary Arts Sony Ton-Aime, when a man ran onto the stage, attacking Rushdie at 10:47 a.m.

New York State Police, at a press conference in Jamestown Friday evening, identified the man as Hadi Matar, 24, of Fairview, New Jersey. According to police, Rushdie, 75, suffered an apparent stab wound to the neck and chest and was transported by helicopter to UPMC Hamot, in Erie, Pennsylvania. The New York Times reported late Friday night that Rushdie, while stable, was on a ventilator, citing Rushdie’s agent Andrew Wylie that the author “will likely lose one eye; the nerves in his arm were severed; and his liver was stabbed and damaged.” Reese, 73, suffered a minor head injury.

At the time of the press conference, Matar had not been charged, as prosecutors and police awaited word on Rushdie’s condition. An arraignment was planned for later Friday. Police were unsure of Matar’s criminal history, but said he was potentially facing federal charges.

The Amp was evacuated immediately Friday morning. In the aftermath, Chautauquans took to Odland Plaza and Bestor Plaza, comforting one another and holding impromptu prayer circles. Hurlbut Church opened as a gathering place for people wanting to commune in silent prayer, and the Church’s meal ministry provided food for Institution staff.

All remaining Institution programming was canceled Friday, as were events Saturday, Aug. 13, including the Corporation meeting and the Class B Trustee Election, which will be rescheduled to take place before the end of the season. Religious services will be conducted as scheduled, and the administration is hoping to confirm the joint performance of the Chautauqua Symphony Orchestra and The Washington Ballet at 8:15 p.m. Saturday in the Amp.

Rushdie, a previous Chautauqua Literary and Scientific Circle author for his book The Enchantress of Florence, is a lauded and prolific author of 20 books, including 1988’s The Satanic Verses. That book was a subject of great controversy, resulting in numerous death threats — including a 1989 fatwa placed on Rushdie’s head by the Ayatollah Ruhollah Khomeini. A failed assassination attempt on Rushdie’s life came that same year. The fatwa was declared “finished” by Iran’s former president Mohammad Khatami in 1998, though it was never formally lifted.

On the Amp stage in 2010, when asked about the Ayatollah’s fatwa, Rushdie merely pointed out “one of us is dead. … You know what they say about the pen being mightier than the sword? Do not mess with novelists.”

Reese and Rushdie’s conversation, over before it began, was to center the idea of America as a haven of free expression, particularly for persecuted artists.

“Sadly, the level of persecutions is not dropping, but rising,” Rushdie told Daily staffer Raegan Steffey in an interview prior to his scheduled lecture, “… and safe places are required.”

As Chautauquans spilled out of the Amp by the hundreds in shock and sorrow, the Critical Incident Stress Management Team of Chautauqua County were called to the grounds at 12:30 p.m., stationing representatives at the Hultquist Center to help counsel those who witnessed the attack. The CISM normally serves first responders, but occasionally helps communities in the aftermath of tragedy.

“These things tend to tear people’s psyche up,” said Robert Benson, pastor of Christ Lutheran Church in Bemus Point and the chaplain for the county fire service, with 38 years of experience in the fire service. “Being able to recognize the things that would set you off and recognize that this is stress, and being able to cope with that by talking to people — I think that’s what’s going to be key and important, especially for the community right now.”

Friday evening, Chautauquans gathered in the Hall of Philosophy and the surrounding grove for an interfaith vigil service.

Chautauqua’s interim pastor, the Rev. Natalie Hanson, outlined the evening of music, prayer and healing for those in the grove.

“We’re going to spend some time in quiet reflection and we’re going to pray together,” she said. “… Because the real reason is just to be together in this place, and cherish the fact that we are a community.”

What Chautauqua experienced Friday, with its international reverberations, is “unlike anything in our 150-year history,” Chautauqua Institution President Michael E. Hill said at the vigil. It was “an act of violence, an act of hatred, a violation of the one thing that we have always cherished most: the safety and the tranquility of our grounds and our ability to convene any conversation, even if those conversations are difficult.”

“Today was also an attack on an ideal we cherish dom of speech and freedom of expression are hallmarks to our society and our democracy, and the very underpinnings of who we are and what we believe and what we cherish the most,” Hill said. “Tonight, we’re called to take on fear, and the worst of all human traits: hate — and let’s be clear, what many of us have witnessed today was a violent expression of hate that shook us to our core. We saw with our own eyes, and we saw it with our own faces. But we also saw something else today that I hope we never forget. We saw some of the best of humanity in response to the numbers of people who ran toward danger.”

The response, Hill said, has to be love. But it also has to be action.

“We will return to our podiums and our pulpits,” he said. “Our hope is we will continue to convene those conversations that were tried to be stopped today, so we can build greater empathy — and it’s more important now than ever.”

Daily staffers Skyler Black, Megan Brown, Alyssa Bump, Kaitlyn Finchler, GraciAnn Hicks and Cassidey Kavathas contributed to this report. This story is evolving, and will be updated, as the Daily’s coverage of the attack on Rushdie and community response will continue in subsequent editions of the paper.