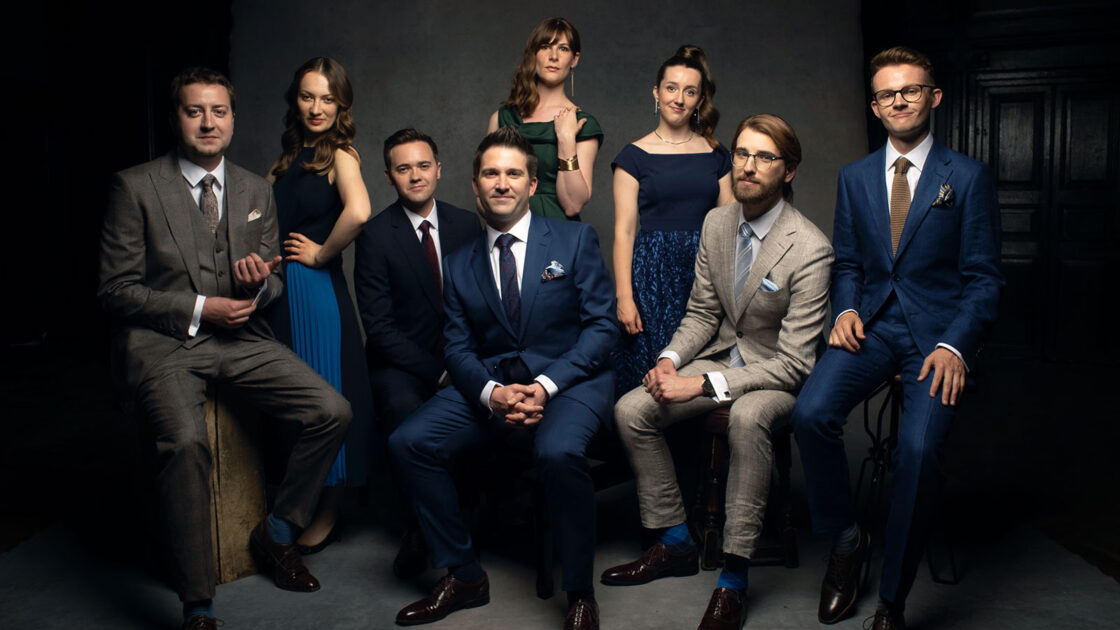 The Amphitheater will echo the ethereal songs of British vocal ensemble group VOCES8 in a purely polyphonic performance at 8:15 p.m. Tuesday, Aug. 9.

The group, which will sing a variety of covers and classics from its extensive repertoire, has performed at numerous places across the globe within a career spanning nearly two decades, including Wigmore Hall in London, Cité de la Musique in Paris and the Sydney Opera House. Tonight, VOCES8 makes it Chautauqua debut on the Amp stage.

“They’re a British vocal ensemble celebrated not only for their musicality, but also for their innovation onstage and off,” said Vice President of Performing and Visual Arts Laura Savia. “Chautauquans might not yet be familiar with them, but I would challenge anyone to listen to their performances and not be completely sucked in. They are truly mesmerizing.”

Coming off the heels of its 2022 European and United Kingdom tour, the group graces Chautauqua on the third stop of a brief four-city United States-Canada tour.

Roxanna Panufnik is currently a composer-in-residence and Jim Clements is an arranger-in-residence. The group was founded in 2005 by Barnaby and Smith.

VOCES8 is known for its wide range, sweeping from the classical compositions of the early 1500s to modern works infused with jazz and pop.

“Their performance will include music by composers from the 1500s, all the way through composers who are living and working today,” Savia said. “This is really typical of VOCES8. They have this impeccable technique that is rooted in classical vocal and choral traditions, but their repertoire spans centuries. It’s really rare that you encounter a vocal ensemble that is proficient in both Benjamin Britten and also the score of Lord of the Rings.”

In between world tours and performances, VOCES8 has released several albums through its in-house studio VOCES8 Records, founded in 2008. The group has also collaborated with other artists to create an impressive discography of work. VOCES8 most recently appeared on composer Mårten Jansson’s 2022 album Requiem Novum and composer Christopher Tin’s 2022 single “A Hundred Thousand Birds.” VOCES8 released its own album Infinity with Decca Classics label in 2021.

While only an eight-person company, VOCES8 is more than just an a cappella group. The company prides itself on providing a musical education in charitable forms, and through their foundation.

The VOCES8 Foundation works with the members of VOCES8 and Apollo5, another British a cappella group, to bring musical engagement to communities around the world. The foundation has invested over £1 million in music education in the United Kingdom through master classes, workshops and concerts.

The VOCES8 Digital Academy furthers the educational ethos of the company, teaching over 40,000 students each year through online videos and ensemble coaching. The students come from all over the world to learn from the performers and composers of VOCES8.

“I think there’s an insatiable appetite as well for a cappella and choral singing in the U.S.,” Smith told the Akron Beacon Journal in 2021. “There’s a keenness amongst the student body in America, generally I think, for singing, which is brilliant.”

In summer 2020, VOCES8 launched a global streaming festival called LIVE From London, which has hosted artists to perform for audiences all over the world. Since its debut, LIVE From London has broadcast 65 shows to over 183 territories, raising over £100,000 in donations for free student and school admission. Summer 2022’s LIVE From London festival runs until Sept. 18, featuring performances from multi-choir I Fagiolini, and Grammy Award-winning group Phoenix Chorale.

Savia anticipates a night of awe and wonder in welcoming VOCES8 to the grounds for its performance.

“VOCES8 is an ethereal, mesmerizing vocal ensemble that will surely enrapture Chautauquans,” Savia said. “… It will be a once in a lifetime experience for Chautauquans, and for me, to hear them sing.”