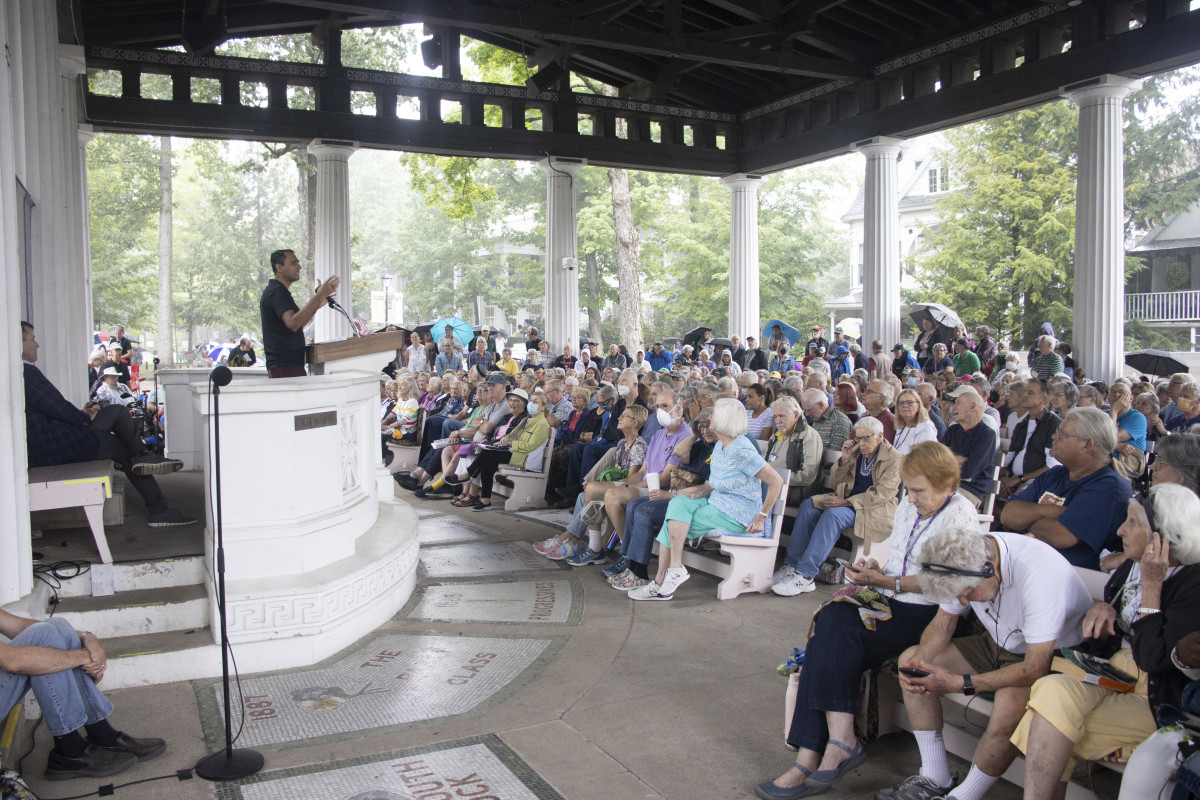 In modern society, many people have become fearful that increasing diversity is threatening their own personal identity. Eboo Patel, however, believes that diversity is not a game of musical chairs; rather, there are enough seats at America’s table for everyone, showing that when different identities work together they can create a circle of unity.

“Diversity should be fun, but some people don’t want it to be,” he said. “We should enjoy learning about each other … trying each other’s dishes … hearing each other’s stories, … sharing our own heritage — that ought to be a circle of distinctive pride and strengths.”

Monday in the Hall of Philosophy, Patel opened Week Nine’s Interfaith Lecture Series theme of “Faith and the Tapestry of the Future,” with his lecture “Potluck Nation.” Patel is the founder and president of Interfaith America, a leading multi-religious organization in the United States, which works to promote religious diversity and unity.

He is a staunch advocate for interfaith cooperation. Patel received his doctorate in the sociology of religion from Oxford University, previously served on President Barack Obama’s inaugural Advisory Council on Faith-Based Neighborhood Partnerships, and has written several books and numerous articles on faith-related themes. His latest book, We Need to Build: Field Notes for Diverse Democracy, discusses how Americans need to join forces as architects of the future to construct a more diverse and inclusive society.

America is a country that was founded on what Patel refers to as the grounds and rivers of religious diversity. He referenced how in the 1600s, the pilgrims first traveled to the Americas in pursuit of the ideal of religious freedom, and separation from the Roman Catholic Church, eventually leading to the formation of the United States in the late 1700s. He then transitioned into talking about how even though the Founding Fathers of America arguably made questionable decisions, they ultimately sought out ways to protect religious freedom through their actions, providing Americans with something positive to learn from them.

“I want to begin with these names familiar to us all — Thomas Jefferson, George Washington, Benjamin Franklin, Alexander Hamilton, and the other European Founders of the 1776 generation — the men who, as the saying goes, put the furniture in the room,” he said. “In many dimensions of identity, we all know that they made mistakes and even committed sins, but with respect to religious diversity and identity, they came close to getting it right.”

Patel explained how each early leader, in their own way, sought to protect and promote religious tolerance, offering Chautauquans a more altruistic perspective of the Founding Fathers.

“George Washington told a Jewish leader that the United States would give bigotry no sanction, persecution no assistance — that the children of the stock of Abraham would be free to sit under their own vine and fig, and there should be none to make them afraid,” he said. “… John Adams signed a treaty of friendship and cooperation with a Muslim nation. Benjamin Franklin, who made personal donations to every established religious group in his city of Philadelphia, and helped build a hall in the city, declaring that the city should be open to preachers of any persuasion. Thomas Jefferson and James Madison wrote laws that allowed for freedom of religion, and prevented a government-established church, creating the architecture for the world’s first mass-level religious democracy.”

Patel said America is now entering a new path in its religious geography that is changing the trajectory of its waters of diversity, which he refers to as “a bend in the river.” In recent decades, U.S. religious diversity significantly increased, altering the country’s once-majority Jewish and Christian demographics.

During the 1920s and early 1930s, at time when anti-Semitsim, anti-Blackness and anti-Catholicism were all prevailing sentiments and percolating attitudes in the world, Patel said a group of multi-religious leaders — made up mainly of Catholics, Protestants and Jews — came together to form The National Conference for Christians and Jews, now known as the National Conference for Community and Justice. At its outset, the organization sought to facilitate dialogue and discussion, mainly between Christians and Jews, and to help combat religious intolerance.

“The notion (behind the formation of the National Conference) was that this country wasn’t going to exclude the contributions or violate the dignity of its religious minorities anymore,” Patel said. “Back then, the religious minorities with any kind of footing at the time were Jews and Catholics, so that’s where the group focused its attention at the time. They sent dialogues around the country to establish Jewish-Catholic-Protestant roundtables in communities from coast to coast. They gave presentations on the brotherhood of man under the fatherhood of God. … They made up the title to the next great chapter in the story of American religion.”

Now, in the 21st century, Patel said that America is once again writing a new chapter in its religious history book, a chapter of widespread religious diversity.

“Every river bends at some point, every page turns,” he said. “Dusk falls on even the most important of moments and eras.”

Patel went on to explain, with supportive data, just how religiously diverse America is becoming. He said that there are currently about 4 million Lutherans of the Evangelical Lutheran Church in America and around 4 million U.S. Muslims, which many people don’t realize. Through his work with Interfaith America, Patel is working to raise awareness of this diversification.

“The job of my organization is to tell the story of Interfaith America to a nation that does not yet know … its future (and current reality),” he said. “We are helping the country live into that possibility. We are proud to have Chautauqua join us on that journey.”

America has often been referred to as a melting pot of cultures, but Patel believes this term has potentially harmful implications for understanding contemporary diversity.

In a melting pot society, individuals are forced to compromise their own individual values and personal beliefs to conform with those from more dominant cultures, ultimately discouraging diversity and often leading to assimilation and hegemony. Patel shared a personal story from his own experiences growing up as Muslim-American.

As a young child, his mother would ask him every year what main Thanksgiving dinner dish he wanted. He was tasked with deciding between turkey, a more American food, and biryani, a traditional Muslim mixed-rice dish. He said that he eventually acquired a palate that preferred turkey, and, for fear of standing out as different, he would often hide the fact that he ever ate biryani with his holiday dinner from his peers at school

“Can you guess how many kids at school I told that we ate biryani? Zero. And that’s the melting pot — you don’t talk about your distinctiveness,” he said. “Do you know what the feast food of the actual first Thanksgiving was? It was deer, it was venison. … As you have a multicultural nation, the feast foods are going to change. That’s the melting pot variety of American diversity.”

Patel described America’s current social climate as a battleground, where people are often self-absorbed and fight over who is the most oppressed group, forgetting to think about what others around them may be feeling and experiencing.

“Right now, we’re living in a dangerous situation. The battleground metaphor is where we only talk about our own wounds and we seek to wound other people,” he said. “I just think that with that metaphor … civilization doesn’t go very far.”

Instead of viewing America as a melting pot, where certain flavors of identity and spices of diversity can overpower others, he encouraged Chautauquans to rather think of diversity as a potluck, where everyone’s uniqueness should be embraced, welcomed and celebrated. Unlike in a melting pot or on a battleground, in a potluck society, everyone is equally valued.

“Think about this for a second: The only way that you can have a potluck is if people (each) bring a dish and contribute. If everybody is from the same region and ethnoreligious group, you’re going to have a lot of casseroles or a lot of biryani,” Patel said. “As much as I like that — and the occasional casserole — I don’t want an overwhelming amount of either. I want a variety. A potluck is best when you have the distinct contributions of diverse groups of people.”

Patel used this analogy to show how he believes diversity should be embraced in America, and why he prefers to use potluck imagery.

At a potluck, everyone is expected to bring a dish to pass around, to be an active contributor. He compared this to how everyone’s distinctly unique background, identity and heritage has the potential to enrich American life and society. Divisive forces, however, are currently attempting to threaten diversity; yet Patel believes that these barriers do not have to inhibit an individual’s agency and freedoms.

The analogy of a potluck recognizes the potential of diversity to facilitate dialogue and curiosity, leading to cultural diffusion and the formation of new cultural identities. Patel said different identities do not have to be in conflict — they can instead complement one another by bringing out each other’s best characteristics and unique qualities.

“A potluck, when it runs right, is a place that facilitates interesting conversation and creative combinations. It’s when someone’s crusty bread recipe from Eastern Europe goes well with someone else’s spicy dip from the Middle East,” he said. “It’s when the story of a spiritual seeker inspires a Shia Muslim to share something of her story. That’s the space and the architecture. (At a potluck), it’s not just the individual dishes, it’s how they mix and recreate (new dishes).”

Finally, at a potluck, diversity is often viewed positively.

“I love potlucks, because most of the time we focus on what could go right,” he said. “If you focus on what could go wrong, no one would ever have a potluck. … When you think about diversity, you maximize what is right. Most people want to get along … to learn from others who are different … to share a relevant and useful part of their story … for their identity to be a bridge of cooperation and not of division.”

Patel closed by saying that a potluck is not possible without a gracious, warm and hospitable host. He encouraged Chautauquans to invite diversity into their own spaces, helping to ensure that every identity has a place at the American table.

“I want you to keep this metaphor of the potluck nation in mind as you continue your time here at Chautauqua, and as you consider this country — what might be the most rapidly diversifying country in human history … and religiously devout country in the Western hemisphere,” he said. “You can bring a dish to the American potluck, and can invite people to join. … You can help nudge the nation more towards what it might be. Not a melting pot, a battlefield, but a potluck where everyone is invited and valued, where our best dishes are made better by other people’s dishes, where we become more fully ourselves in relationship to others and service to everyone.”