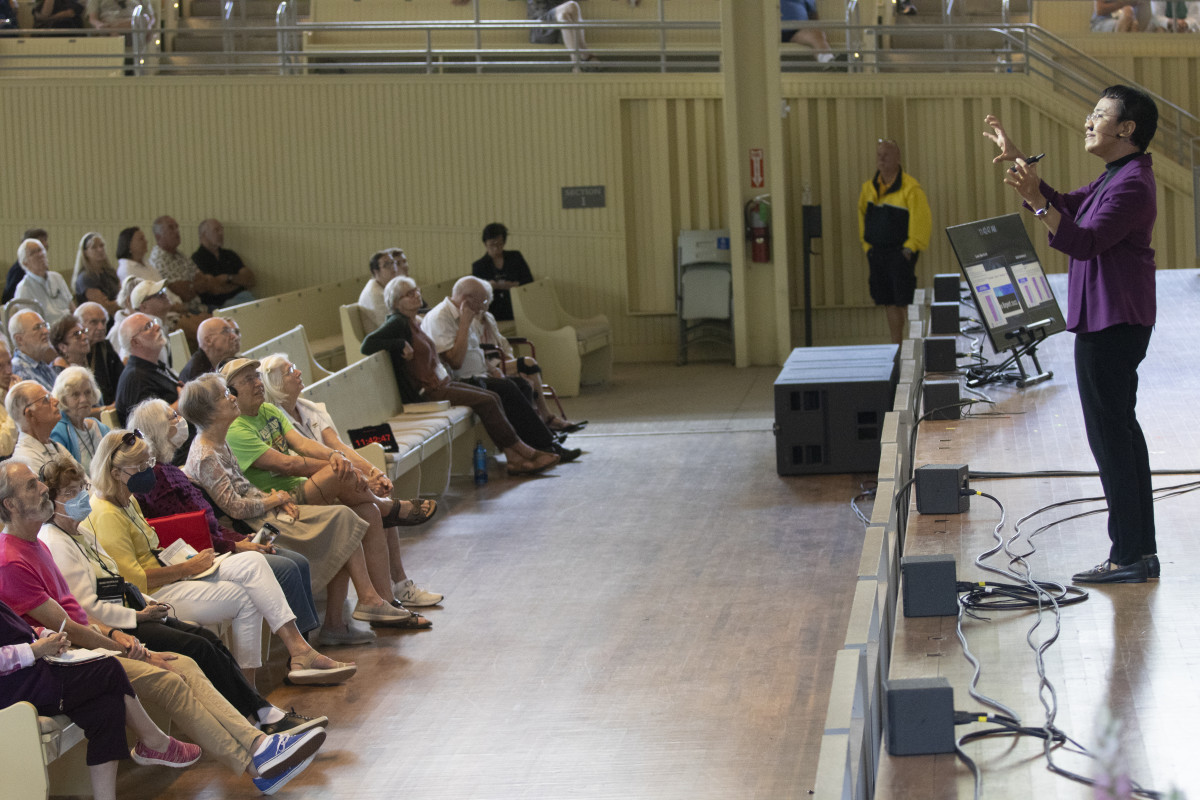 “This is my 36th year as a journalist and I think, like you, I learn my lessons from experience. I’m going to pull together the data, the evidence of how journalism and technology come together,” Ressa said.

She described her journalism experiences in an era of changing technology as micro, macro, and then micro again, and said that this “micro, macro, micro that I lived through actually led us to a time where the new profiles of courage are far more atomized. It is yours. It is the person next to you.”

At 10:45 a.m. Friday, Aug. 19 in the Amphitheater, Ressa, the CEO and president of the online news organization Rappler, shared how we can all find courage and how her experiences show this path toward courageousness. Ressa used her experiences in her early career as a local correspondent for CNN to show the rapid changes born from journalism and technology fusing together.

Prior to major social media outlets spurring global interconnectedness, Ressa could spend time in a community for days before reporting back. During her career, she witnessed this shift as she began collecting information and reporting on the same day.

“I couldn’t spend 10 days with you. I then had to come out on satellite to talk to you …” Ressa said. “… In 2005, I decided I don’t want to write for this global community where it feels like I throw my stories into a black hole. I want to write for my community.”

In 2012, Ressa founded Rappler because she saw technology changing everything that she knew. Rappler hoped to fact-check and help limit the spread of misinformation on social media, which was becoming increasingly popular.

Four years later, in 2016, Rodrigo Duterte was elected president of the Philippines and things changed for Ressa once again.

“I got 10 arrest warrants in less than two years. I haven’t done anything wrong, except to be a journalist,” Ressa said.

Ressa found the courage to continue her job through the weight of the retaliation against her through five lessons: learn, speak, draw the line, trust and faith.

“Learn. With all the changes happening, oftentimes what we tend to do is to bury our heads in the sand,” Ressa said. “In fact, on social media … the voices you hear the most on social media are the extremists. But the people in the middle, the people who are the connective tissue, tend not to speak.”

Ressa’s second lesson is to speak. She described now as an essential moment; if by 2024 nothing significant happens, then enough illiberal leaders will be democratically elected to change the geopolitical power balance.

“Speak. This is a week since Salman Rushdie was here in front of you,” she said, asking Chautauquans to remember, “the sacrifices he made to speak, the fact that I could go to jail for the rest of my life because I refuse to stop speaking. Silence is consent. Speaking doesn’t mean punch, speaking means speak. When you see something in your area of influence that is right or wrong, speak.”

Ressa thinks the third lesson, draw the line, is most critical when people are young. By drawing the line, a clear distinction is made between good and bad.

“Draw the line. When on this side, you’re good and when you cross it, you’re evil. You have to make that clear, because the rest of our lives is about rationalizing and perhaps crossing that line,” Ressa said. “Do it when you have no vested interest in it, when you know what’s right and what’s wrong.”

“Trust. Why is that important? Well, we’re here because we trust each other. Your community is based on trust. With trust in the room, everything is possible. Without trust, nothing is possible,” Ressa said. “The other reason why I say ‘trust’ is because that’s what social media has broken down. Social media has divided, polarized and radicalized.”

Ressa’s last lesson is faith — though she isn’t necessarily a religious person. To her, it’s more about empathy and community.

“We have to believe in the goodness of human nature. …  One person can only do so much, but a community — … it’s a faith in someone else that they will be there for you,” Ressa said.

Social media has put this faith in humanity in danger. Social media uses our biology against us, as thinking fast and with emotions such as anger and hate, spreads further on those platforms, Ressa said, leading to fear.

“The way you get to those five (lessons) is by embracing your fear. Whether it was walking into my third grade class in Toms River, New Jersey, where I was the shortest, and only Brown kid — I could barely speak English — to today, when I’m going around in Manila, I drive in a car with security and I have to wear a bulletproof vest,” she said.

Ressa believes there has to be a person-to-person defense of democracy, as technology and social media platforms are increasingly becoming more and more manipulative.

“What happened? How did it change us? … What can we do about it?” Ressa said. “That’s the question: What are you willing to sacrifice for the truth? It’s about trust.”

“In my career, what I’ve seen in Southeast Asia is that the quality of the democracy is always inevitably linked to the quality of the journalists, as from 1986 to today,” Ressa said. “Then what’s happened is the incentive structure for journalism — because we are distributed on social media — has turned everything upside down. The incentive is against good journalism.”

“There’s that digital intelligence and machine learning that’s all in your smartphone, and it creates these trends, personalized mass persuasion,” Ressa said. “Imagine if every one of you could see the feed of everyone else. You wouldn’t be seeing the same thing.”

Ressa described it as “The Matrix” meeting the “The Truman Show” times 3.2 billion. Though there are levers to somewhat control this mass communication, like money, codes, norms and laws, Ressa said, these controls cannot do much against violence.

“Online violence is real world violence. Impunity online is impunity offline. … We’re the same person online as we are in bigger groups, our brains, our emotions, the same person. We’re affected by what happens; online doesn’t stay online,” Ressa said.

An example of online rapid radicalization leading to real-world violence in America, Ressa said, was the May Buffalo Tops Friendly Market mass shooting. Social media platforms and their algorithms have taken over as the gatekeepers of the public information ecosystem, which has left journalists with little distribution power.

A lie spreads faster and further than facts, and influences the behavior modification system; this system is when someone’s behavior is indirectly influenced by something online.

“For example, in 2014 it came bottom-up, and then came top-down. … You state the lie a million times, ‘Maria Ressa is a criminal,’ and then a year later, President Duterte says the same thing: ‘Maria Ressa is a criminal, journalists are criminals,’ ” Ressa said. “A week after he said this in the State of the Nation Address, I got my first subpoena. Rappler got its first subpoena, and then we had 14 investigations in 2018, and then I kept getting arrested.”

Another reason lies spread so rapidly is due to Facebook’s “friends of friends” algorithm, which causes the things you like to repeatedly show up on your feed. This meant hyper-political polarization, specifically in the Philippines, where if you were pro-Duterte you moved farther right, and if you were anti-Duterte you moved farther left, Ressa said.

“Antitrust, data privacy, user safety, content moderation, all of this. These things roll up. Laws need to be put in place to protect us from this,” Ressa said.

In 2016, Ressa, with the other co-founder of Rappler, wrote a three-part series that looked into how democracy was affected by Facebook algorithms and fake accounts. They found that 26 accounts influenced more than 3 million accounts. Ressa shared how accounts latched on and actively dehumanized her, with online harassment comparing her to apes and scrotums because of how she looked.

“When you dehumanize, you then open up to treating people like criminals or beyond that,” Ressa said. “This is dangerous.”

In 2020, UNESCO conducted a survey regarding the treatment of female journalists and found that 73% experience online abuse, 25% receive threats of physical violence and 20% are attacked in the real world.

“Online conspiracy theories impact the real world. It wasn’t a surprise to me, but to see how easily American institutions can collapse alarms me because where America goes, the world goes,” Ressa said.

Ressa then circled back to her Nobel Peace Prize speech and a case study on the repeated attacks on her Twitter account. The study found that a majority of the Twitter accounts attacking her were supportive of Ferdinand “Bongbong” Marcos Jr. and were created after his declaration to run for president.

“We did a story to shine the light, as the only defense a journalist has is to shine the light. Otherwise, we just have to absorb the blows. We have no recourse. We just have to be strong enough to absorb the news,” Ressa said. “We did the story; Marcos tried to take over Twitter with freshly made accounts and, a few days after that, Twitter acted, and suspended over 300 accounts in Marcos’ network.”

To Ressa, the word “trust” means something different in this new age of social media.

“If there is an information operation, do you ask the people who have been manipulated who they trust? This is a problem in every country around the world. How do we define trust? Are we defining trust because we’re measuring the impact of information warfare? Or the question here is: How much agency do you have if you live on social media?” Ressa said.

Now Ressa is working toward rebuilding trust through technology, journalism and communities. She uses a pyramid to show how Rappler is working toward further fact-checking, meshing it with research and preparing legal action.

“Their goal is to share the fact checks on social media, with emotions,” Ressa said. “As much as anger and hate spreads fast, inspiration spreads faster.”

Through the help of outside research companies and lawyers, 21 tactical and strategic litigations were filed in about two months.

“It must be a whole society approach to restore trust. At the core of it is our faith and our commonality and our humanity. This is what we need to do,” Ressa said. “Please, I think we don’t have that much time. I’ve seen such degradation of democracy.”