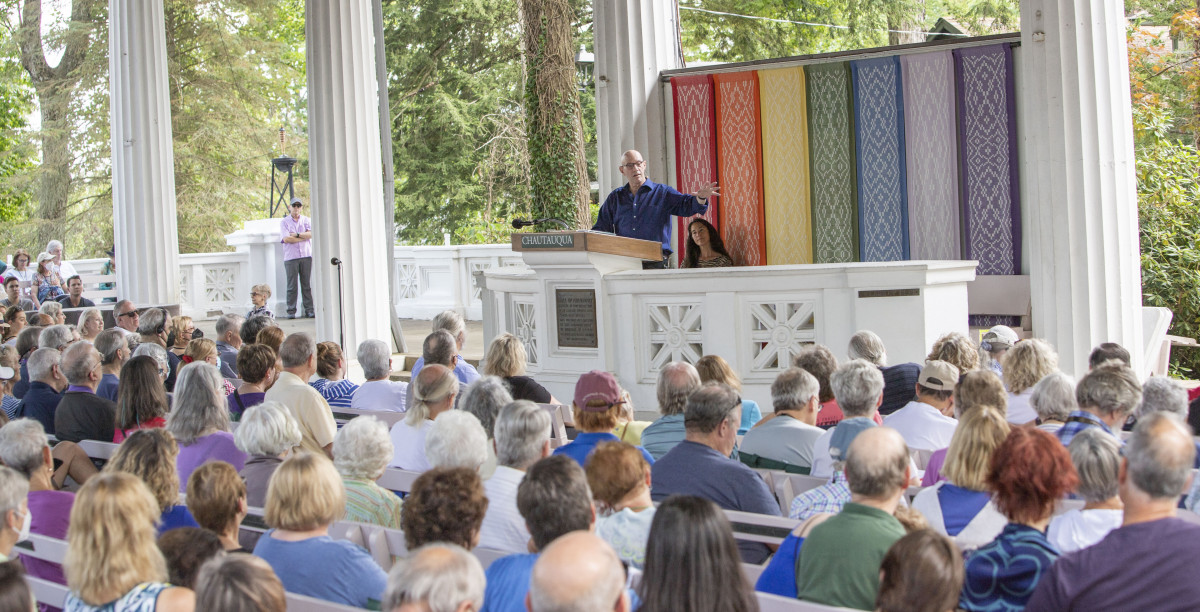 The darkest of times can often lead to new, bright discoveries, such as a rainbow after a gloomy storm or the light at the end of the tunnel.

Mark Nepo opened Week Six’s Interfaith Lecture Series theme, “Embracing the Dark: Fertile Soul Time,” on Monday, Aug. 1 in the Hall of Philosophy with his lecture, titled “Heartwork: Being a Spirit in the World.”

As a poet, spiritual adviser and best-selling author of The Book of Awakening: Having the Life You Want By Being Present to the Life You Have, Nepo is widely known as “one of the finest spiritual guides of our time.”

With over 40 years of experience teaching spirituality and poetry, Nepo has authored or contributed to 29 books and recorded 14 audio projects to share his teachings.

“​​Given our times, I want to explore several things today, including the lineage of care and belonging that we are all part of; the practice of being human; how we are more together than alone; and the hard work that has always been required to be a spirit in the world,” Nepo said.

Throughout history, humans have tended to forget their connection with each other, which can cause rifts in peace. But Nepo said great love and great suffering can help people return to oneness.

In his 30s, Nepo himself experienced suffering when he was diagnosed with a life-threatening, rare form of lymphoma. He felt his mental and emotional journey during this near-death experience was akin to what the pandemic has wrought.

“When I left that appointment (when I found out I had a large, cancerous tumor growing on my skull), the door I had come through … was gone. There was no way to the world as I knew it before that appointment,” Nepo said. “That kept coming back to me, because I think that’s what the pandemic has done to humanity.”

To move forward, Nepo learned to accept the new world he entered with love, and he advised others to do the same. He recognized, though, this is harder said than done, due to spiritual physics.

Nepo urged Chautauquans to listen for things coming together. He views each human soul as a single cell in the whole of the global body, and since cells can be either healthy or toxic, he expressed the importance of having more healthy cells to keep humanity flourishing.

“The inner work you do, your own journey of your soul’s work, your relational work and your own work of integrity … contributes to making sure that humanity has one more healthy soul than toxic,” Nepo said.

Nepo used the metaphor of one root system in the “invisible soil of spirit” to describe the nature of human interconnectedness.

“So if my roots are diseased, it matters to you because pretty soon your roots will get diseased if we don’t help each other,” he said.

Nepo pointed to three enduring spiritual elements — presence, meaning and relationships — that are “as important as gravity.”

Being present, Nepo said, is how humans know life directly. By interacting with loved ones or nature, or experiencing a great emotion, presence reminds people how rare it is to be conscious and alive.

Nepo read a passage from his New York Times best-selling book, The Book of Awakening:

“When we remember how rare it is to be here, it cleans our eyes, our heart, our mind … and we make different decisions, because we regain that direct presence. … There is a Buddhist precept that asks us to be mindful of how rare it is to find ourselves in human form on Earth, … that offers us the chance to feel enormous appreciation … as individual spirits with consciousness: drinking water, doing the laundry, paying the bills, chopping wood.”

While presence allows people to connect to life, meaning brings together individual presences.

“Paradoxically, while the only way I can experience life is through direct experience, I need your experience because we’re more together than alone,” Nepo said.

Relationships are the thread that binds these two elements — presence and meaning — together. Nepo told an Indigenous creation story about a worm and the Great Spirit to articulate the importance of relationships.

The worm slowly spun silk from its stomach to build connections for the Great Spirit; the spirit then gifted the worm the ability to wrap itself in a cocoon and become the first butterfly.

This story, in Nepo’s opinion, represents how humans process their own internal experiences to build relationships with others’ experiences.

“The reason I tell (this story), what touches me about it, is the things that hold everything together are not spun even from the worm’s heart, but from his guts. So … we have to have the courage to process our experience,” Nepo said. “This is the work of self-awareness. This is the work of introspection. … If we do that, we spin the threads that hold everything together.”

Even though relationships bind presence and meaning together, Nepo said staying and engaging in relationships is “the challenge of our age.”

He advised his audience to engage in a few types of eternal relationships.

Discussing the work of being human, Nepo told an ancient Hindu story about a poisonous spider drowning in water and a holy man trying to save it. Day after day, the holy man would save the spider even though it would sting him.

This lesson shows the innate kindness humans hold, and Nepo said this kindness dilutes the sting of the world.

This story also touched on sacrifice, and Nepo said the original definition of the word means to “give up what no longer works in order to stay close to what is sacred.”

With this, Nepo asked the audience if the way they live life, through thinking, acting or being, is still working.

Nepo’s friend, Joel Elkes, died five years ago at the age of 102. Nepo spoke about Elkes’ mother, Miriam Elkes, who was a Holocaust survivor of Auschwitz.

Before she died, she shared with her son two things that she would do to help her get through her days of suffering: She would carry a piece of bread crust in case she met someone who needed it more than her, and she would brush her hair every night with a piece of a broken comb to affirm her person.

“I leave you with that question: What is it that you carry every day in case you meet someone more in need than you?” Nepo asked. “And what small gesture can you do, either morning or night everyday, to affirm your person?”

Nepo closed with his poem, “If You Want a True Friend,” exploring the idea that even if people are unsure of where they are at and where to go next, admitting their uncertainty opens doors:

“Then you can begin with nothing in the way.  /Go on, admit to the throb in your heart. / And let the journey begin.”