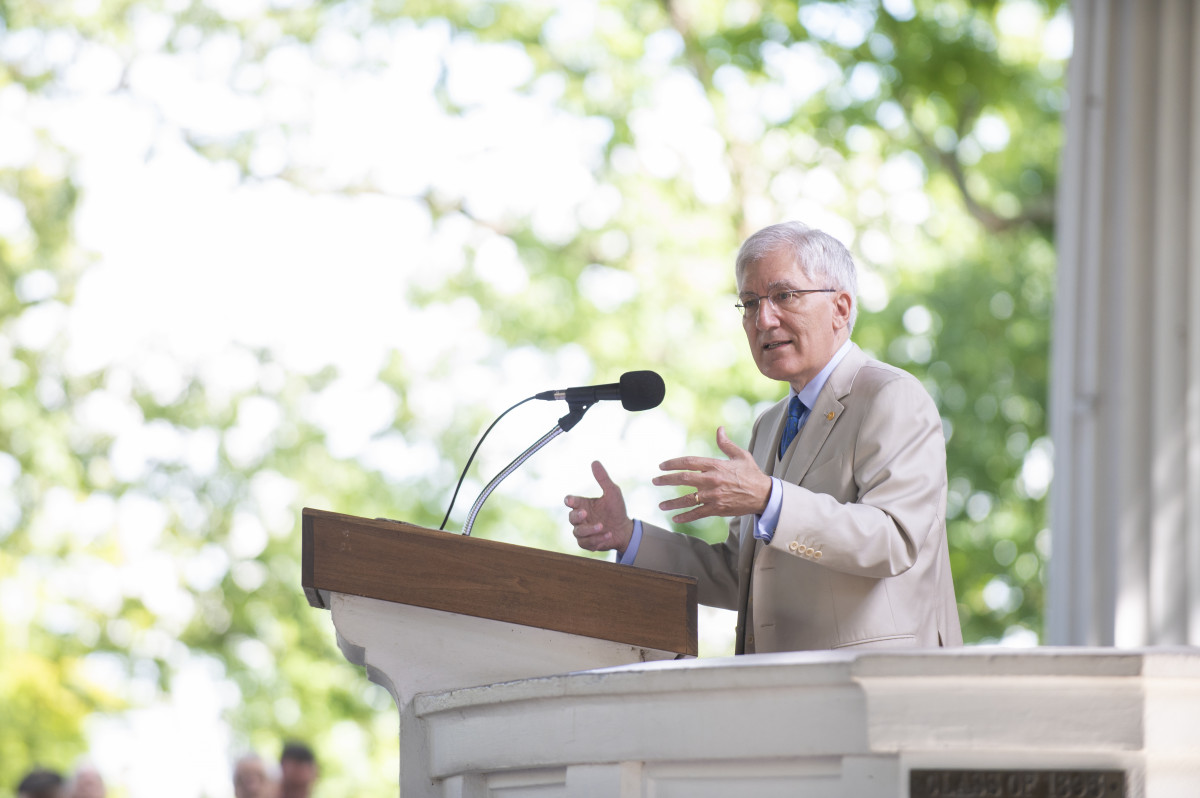 Historically, universities have insulated freedom of thought and expression, allowing new ideas to flourish. But Robert P. George, Princeton University’s McCormick Professor of Jurisprudence and director of the James Madison Program, argues that a dangerous and potent form of illiberalism is on the rise across universities.

On Thursday, Aug. 18 in the Hall of Philosophy, George delivered his lecture, titled “What Causes – And What Might Cure Campus Illiberalism?” His presentation served as a continuation of Week Eight’s Interfaith Lecture Series theme, “New Profiles in Courage.”

“I would like to begin by quoting Salman Rushdie, to whom I dedicate my talk and for whose swift recovery I pray. His words are a perfect epigram for my message today,” George said. “He said, and I quote, ‘The moment you declare a set of ideas to be immune from criticism, satire, derision or contempt, freedom of thought becomes impossible.’ ”

While higher education is meant to facilitate critical thinking and the broadening of perspectives, George spoke on the rise of illiberalism in education. He said universities dedicated to providing a liberal arts education should have three fundamental purposes: the pursuit of truth, preservation of knowledge and transmission of knowledge.

“Now, a grave threat to the pursuit of these three defining purposes today is posed by the politicization of the academy,” George said. “The problem is most vividly manifest in the phenomenon of campus illiberalism — by that I mean the unwillingness of so many members of university communities, often faculty as well as students, to entertain or even listen to arguments that challenge opinions they hold.”

These arguments can involve a variety of topics, including affirmative action, immigration, climate change and abortion, among others. Yet academics who voice their dissenting views tend to face the threat of cancelation.

Providing an example from 2021, George discussed eminent geophysicist Dorian Abbot from the University of Chicago. Abbot was invited to deliver a distinguished honorific lecture at Massachusetts Institute of Technology on how scientists research the climates of extrasolar planets.

Abbot had previously published an article with a Stanford physics colleague that criticized hiring and promotional preferences of some groups in the sciences. The article argued that scientific achievement and promise should be the only criteria involved in the hiring process, which led to public outcry.

“In eight days, the Massachusetts Institute of Technology, the greatest science and math university in the world, folded and canceled Dorian Abbot’s lecture,” George said.

In response, George invited Abbot to deliver his lecture on the same day and time as it was scheduled at MIT, but instead at Princeton.

Other incidents prompt worse reactions than event  cancelations, such as interruption of lectures and presentations, and even death threats and violent assaults.

“Many institutions, colleges and universities throughout the country are subverting the transmission of knowledge … by failing to ensure that their students at every level are confronted with, and have the opportunity to, consider the best that is to be said, on competing sides of all the questions that are in dispute, among reasonable people of goodwill,” George said.

People live in a pluralistic society with differing beliefs and ideologies, and George believes, in order to learn and grow, they must be prepared to listen to those who think differently. Universities must consider the best arguments of competing ideas.

“But, so often today in academia, prevailing opinions are permitted to harden into dogmas,” George said. “Dogmas that go largely unchallenged (leave) students with the entirely false belief … that all ‘right thinking people’ think a certain way.”

The phenomenon of groupthink, when a group’s longing for conformity overrides critical reasoning, allows illiberalism to flourish. A liberal arts education, according to George, is supposed to teach students how to counter groupthink through promoting the virtues of open-mindedness, liberty of thought and discussion, intellectual humility and truth-seeking.

“We have to understand … that we can be wrong because we are fallible, not merely on the trivial, superficial, minor matters in life, but we can be wrong about the big, great, profound, important matters,” George said. “That recognition of our fallibility gives us a conclusive reason to be willing to listen to people who disagree, to be willing to be criticized. … It gives us a conclusive reason to avoid groupthink like the plague, and it’s the task of colleges and universities … to expose students to the competing arguments … and to help students to acquire those virtues.”

Higher education, George said, must provide students with ways to recognize and overcome groupthink, as “their ignorance of the arguments of intelligent dissenters will prevent them from understanding the truth as deeply as they should.”

All people, even great thinkers, have fallen into their fallibility, occasionally finding themselves in the wrong, George said; students must be taught to confront this fallibility through critical thinking, and professors must work to lead a path to truth-seeking.

During Yom Kippur, which means “day of atonement,” a confession of sins is a key part of the ceremony. One of the confessions includes stating when one has been a zealot for bad causes, which is not a deliberate sin.

When one’s errors are exposed by someone else, people often feel anger or embarrassment. George argued that the exposer should not be seen as an enemy, but rather as a friend.

“How do you figure out which (beliefs) are untrue … if you put up a wall (and) won’t allow yourself to be challenged?” George asked. “… The person who corrects our mistakes does us the very best service.”

It is easy to slip into groupthink, but it is very difficult to recognize when one is conforming to the ideas of those around them. There are obvious signs at the university level when people of dissenting views are silenced, turned away or attacked, but there are also more subtle signs that are often missed, George said. To avoid this, he believes universities should be intentional about having a variety of opinions present on their campuses.

“Viewpoint diversity, having people around a university that have different opinions about things, has its great value as a kind of vaccine against groupthink,” he said. “… Diversity of views, approaches, arguments and the like is the cure for campus illiberalism.”

This diversity is hard to find and implement, however, as humans have a natural positive bias toward beliefs that align with their own.

To solve these issues of illiberalism at the university level, George believes viewpoint discrimination needs to be exposed and brought to the forefront of the conversation. Peter Singer, George’s Princeton colleague, has defended the moral permissibility of infanticide. Rather than fighting for Singer to be fired for his viewpoints, George believes people should be open to new perspectives and seek to challenge Singer’s beliefs through informed debate.

Universities hold the responsibility of challenging their students with new ideas rather than reinforcing their own beliefs, inviting dialogues rather than monologues.

The James Madison Program at Princeton has a mission of emphasizing viewpoint diversity. George described the impacts of this program as remarkable.

“The presence on a campus of such an initiative ensures that there are people around who really do represent a range of opinions, and can provide students with the best arguments and the evidence supporting a range of positions,” George said.

Through joint seminars, George teaches with his colleague, Cornel West, even though they have differences in opinions and beliefs. George calls these seminars “magical,” as the pair exchanges healthy debate that promotes the importance of respectful dialogue.

“We collaborate across the lines of ideological and political difference in the common project of truth-seeking, … engaging with each other and our students in a serious, respectful manner, striving to understand and learn from each other,” George said.

Rather than teaching students what to think, George believes colleges should teach students how to think and address controversial issues through a clear lens. He finds that having competing ideas in the classroom promotes a diversity of viewpoints.

“I am pleading for attitudes and practices that will cure campus illiberalism without the need to give anybody preferences in hiring and promotion,” George said. “… We would not have departments … with 43 liberals or progressives and one conservative, or more likely one libertarian, nor would we have the embarrassments and in places where violence has occurred, the tragedy of campus illiberalism.”