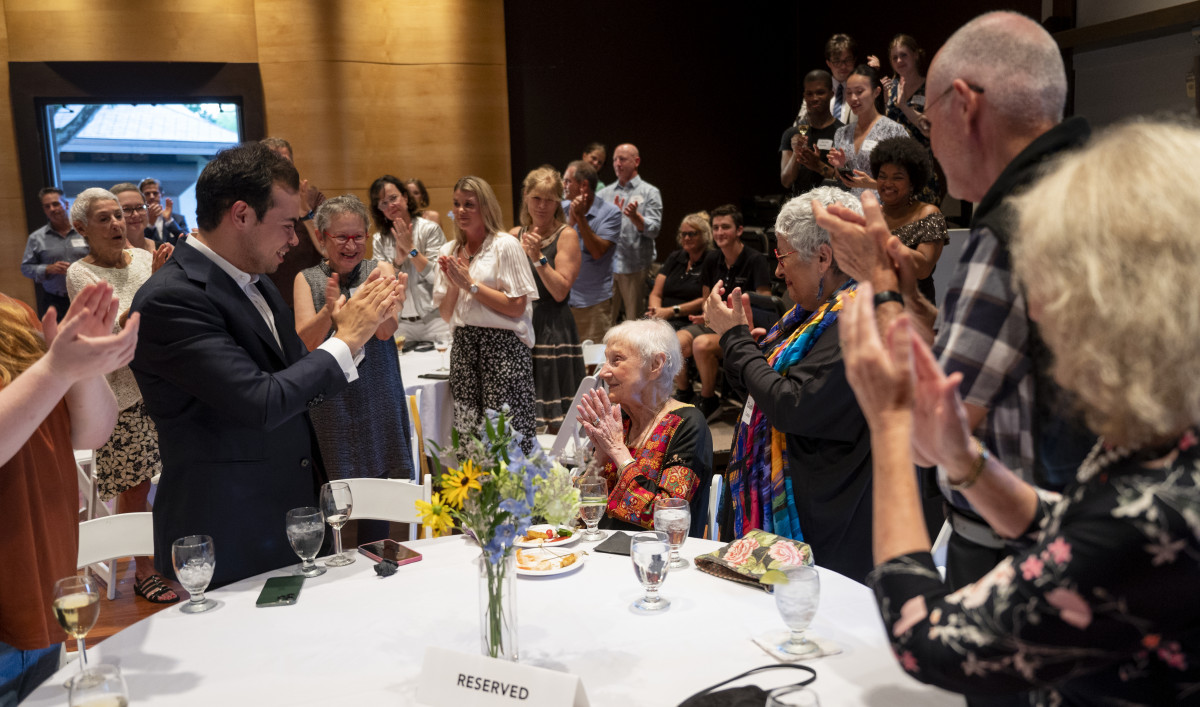 Former and current students, lifetime Chautauquans, and people from all generations gathered last Friday evening in McKnight Hall to celebrate Marlena Kleinman Malas with a dinner and celebration to officially launch the Marlena Malas Scholarship Fund. Not only was the event attended by Malas herself, who serves as the dean of admission at The Juilliard School, and embraces her nickname of “the diva of rejection” but also by mezzo-soprano Susan Graham, who has studied with Malas for around 35 years.

“There are many others that will come after me that will talk about Marlena the artist, Marlena the teacher, Marlena the generational influencer of an entire industry of people who have gone on to create some of the most incredible works that our country has ever known,” Hill said. “I’m not going to do any of that.”

When Hill became Chautauqua’s president in 2016, the administration shared there were some specific people he must meet. One of them was Malas.

Hill had heard myths about Malas, and there was a lot to hear. She teaches at The Juilliard School, the Manhattan School of Music, and the Curtis Institute of Music, and her students, such as Neil Shicoff and Tatiana Troyanos, have led prolific and lauded careers. Hill was, of course, nervous to meet her.

“We went to her studio my first year, and we sat in the corner,” Hill said. “And I discovered Marlena the person, who loved this place within an inch of her life, and who reminded me that magic happens here and who made me believe that coming to Chautauqua was a decision to change the world, like she had done for decades.”

From their first meeting, Hill felt Malas’ love for her students and how much she believed in them and the growth they could achieve. She believed she could make them better storytellers.

“In a world that is so desperate to find humanity,” Hill said, “how fitting tonight that we get to honor and celebrate someone who decodes human beings and makes them better storytellers.”

Hill left the more formal introduction of both the evening and of Malas to Senior Vice President and Chief Program Officer Deborah Sunya Moore who began working at Chautauqua only three years before Hill’s arrival, and, in that short time, felt Malas’ powerful influence.

“I do think that when we were introducing Michael to Marlena, … I think I did tell him that he was visiting the queen,” she said.

Malas, who remains humble, would never permit a long list of her experiences to be shared, but Moore decided to include it, as the scholarship is due to her decades-long dedication to music.

“Tonight we are not only celebrating the ongoing legacy of Marlena’s amazing career here and her gifting here of teaching … and not just teaching singing lessons — teaching life lessons,” Moore said. “We are also celebrating the start of the student scholarship fund in Marlena’s name so that all of us can touch and be a part of this incredible legacy continuing forever at Chautauqua.”

In preparing to speak on Malas’ accomplishments, Moore asked voice students and faculty what caused Malas’ teaching and overall presence to be felt so acutely. She accrued many stories about how Malas teaches people how to relax their jaws and breathe — but one experience brought the real gem behind Malas’ teaching into the light.

Moore observed Malas and her team conducting auditions in New York City for the Voice Program. After watching an immense amount of talented musicians, Moore asked Malas what she looks for in candidates for Chautauqua.

Malas exhibits that care in all aspects of her life. When her and her husband Spiro Malas came to Chautauqua to teach and perform, they brought their children with them and spent the summers raising them on the grounds. Moore felt Malas’ nurturing nature the most poignantly through her children, who participated in the summer opera program under her tutelage.

“This scholarship fund is about creating the space for more students to blossom,” Moore said. “And may I say, to create space in the world for more Susan Grahams.”

After Adams’ performance, Richardson stepped in front of the piano in McKnight Hall and used the word that threaded throughout everyone’s experience learning from Malas: magic.

“Like you told me the other day,” Richardson said, addressing Malas, “our journey is just beginning — but how honored and happy I am to have met you and to have shared some of this magic that I’ve heard so much about.”

This magic made tenor and School of Music voice faculty member Dominic Armstrong the singer he is today. Hailing from what he described as “middle of nowhere, Missouri” to New York City to study at The Juilliard School, Armstrong struggled finding his place as a naturally shy kid.

“Marlena always made me feel welcome, even when I didn’t think I was,” he said.

The second song that Armstrong sang was a spirited rendition of “Sit Down, You’re Rockin’ the Boat” from the musical Guys and Dolls. During the performance, he dropped to his knees.

When baritone and fellow voice faculty teacher Jonathan Beyer stepped in front of the piano after Armstrong, he couldn’t help but express his surprise.

“A shy kid who was afraid of New York?” Beyer said, drawing laughter from the entire audience, who just witnessed a performance by a man one would never think to describe as shy.

Before Beyer began, he straightened his shoulders.

“This is for Marlena because she yells at me for not standing up straight,” he said. “And she has done that since I met her at Chautauqua in 2003, which was my first summer here as a student.”

He returned for summers after to continue learning with her and performing leading roles in productions like Puccini’s La Bohème and Verdi’s La Traviata.

“That was a really invaluable experience for me,” he said. “So when you stand onstage at the Met, you’re like, ‘I don’t know. It’s not as big as the Amp.’ ”

While Beyer sang, he paused during a piano solo to bend over and shake out his arms and torso. Malas’ students all laughed at the familiar exercise.

Moore took the mic again to announce a brief pause for more food and drink before Graham sang.

“I have to tell you, I hope you are feeling as honored as I am to even be in this room with this legacy and this song,” she said.

Donating to the Marlena Malas Scholarship Fund lets more people be a part of the Opera Conservatory program. It will enable students to come and learn from faculty like Malas who love their students and love the storytelling medium of opera.

Graham, who has gone on to sing in the Metropolitan Opera and throughout Europe and the United States and won a 2004 Grammy Award for Best Classical Vocal Performance, closed the evening.

When Graham came to the Manhattan School of Music with an artist’s diploma, she had just graduated from Texas Tech University. Having grown up and spent her whole life in Texas, Graham knew very little about which faculty member to choose to study under.

“I just sort of spun the wheel and pointed at one,” Graham said. “And I got a teacher who was fine. She was perfectly lovely.”

After Graham finished her first year at Manhattan School of Music, she joined the Blossom Festival at Kent State after being rejected from the Santa Fe Opera and other summer opera festival programs. At the time, their voice staff included Stephen Lord, Martin Katz and Marlena Malas.

“I was aware of the Malas mystique,” Graham said. “I had never experienced it, but I got to have lessons with her. Just standing in front of her and singing probably five or six times that summer, I thought, ‘This is where I want to live.’ ”

Graham asked if she could join Malas’ studio when they returned to Manhattan, but Malas refused. Graham continued with her original voice professor, graduated, and realized how much she needed to focus on her singing career.

“I was 27 years old, and I didn’t have any more time to waste,” she said. “And I had to get my voice from good to world-class. I gave myself about six months for that.”

She tried out two teachers, one of whom had her sit on the floor for an exercise and sing like she was giving birth to practice breath support.

The last teacher Graham went to was Malas. Graham desperately wanted to impress her and felt ready to do so with all the new techniques she learned. Graham started singing for her, but then Malas stopped her and asked, “What the hell are you doing?”

From then on, Malas was Graham’s teacher, and Graham continues to go to Malas for coachings. The previous week at Chautauqua, Graham held voice lessons and performed with the Chautauqua Symphony Orchestra on Aug. 4.

“I was borderline fried,” Graham said. “Because at my age, your vocal chords don’t recover as quickly as they do for all of, you know, people here.”

Malas told Graham she would refresh her. She had Graham relax her jaw and massage her ears and neck. Graham said Malas always reminds her of every step and every exercise that she forgets while she is on the road traveling.

“When I first started going (to Malas’ studio), she had a framed thing on the wall that said ‘50 Rules for Successful People,’ and the one I remember the most is surround yourself with the best people possible,” Graham said. “Well, I knew I already had one of those covered: my voice teacher for 35 years.”

Other teachers or managers have tried to encourage Graham to fill out other aspects of her voice that are not natural to her, or change her singing style in a way that is not organic. Malas has refused to do so, even when asked by Graham’s managers.

“Part of the Marlena magic is that she takes — and I’ve seen it this week with the people who study with her — she takes you as you are, she takes you where you are, and she helps you define and blossom and grow that flower because that’s who she is,” Graham said.

Graham does not think she would have the career she has today without Malas and her teaching. Her family members are ranchers and real estate agents.

“I did not know this existed. I did not dream that this life even existed,” she said.

The girl from Texas grew up to hold Leonardo da Vinci’s “Mona Lisa” in her hands, to curtsy in front of the Queen of England, and to meet Prince Charles backstage at the Royal Opera in Paris.

She closed the night with “La vie en rose” dedicated to Malas, but before she began, she raced back to the mic and said, “Oh, and give us a lot of money.”

Graham accompanied herself on the piano with a song that truly exemplified Malas’ work. It told a story, it had something to say.

She finished, stood, and removed the gold necklace she was wearing — one she’d worn while recording a previous album. Graham placed the necklace upon Malas.

Amid applause, Malas waved at everyone to sit down.

“I am overwhelmed,” Malas said. “And I am so grateful.”