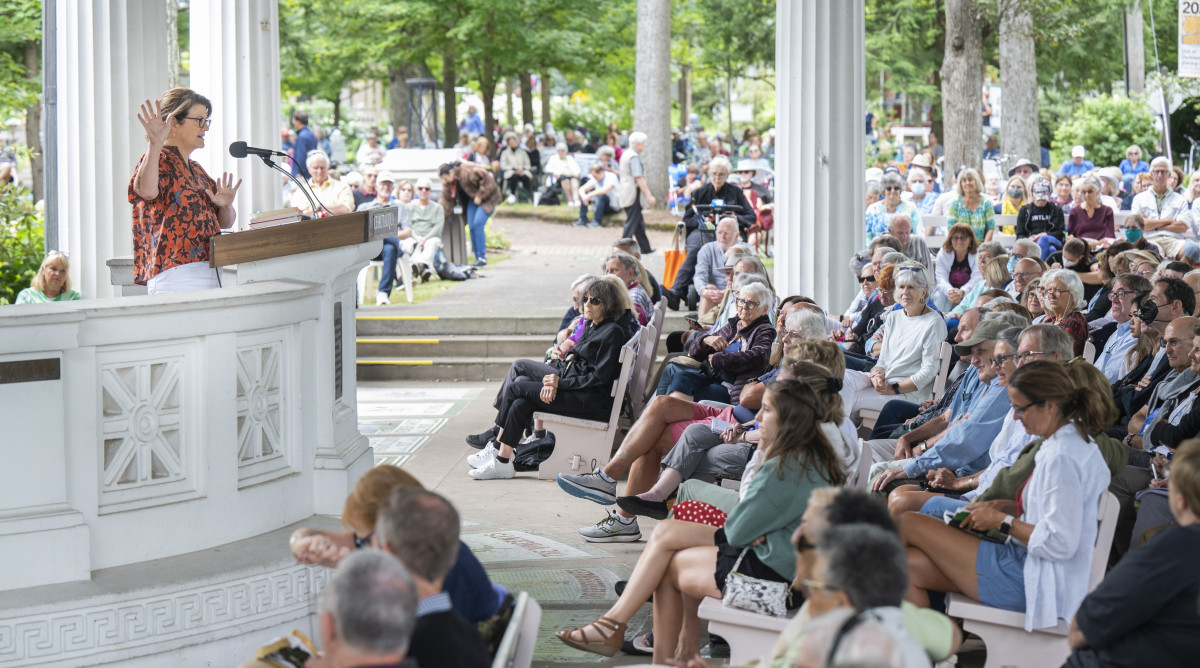 While the comforting feeling of being at home can come from visiting a quaint house, a familiar town or experiencing a nostalgic, tingling feeling, home can also be a person.

Kelly Corrigan, best-selling author, successful journalist and host of the PBS series “Tell Me More with Kelly Corrigan,” spoke on Tuesday, Aug. 9 in the Hall of Philosophy. Her lecture, “Homes: Places that Come to Inhabit Us,” served as a continuation of Week Seven’s Interfaith Lecture Series theme, “Home: A Place for Human Thriving.”

Corrigan was diagnosed with stage three breast cancer in 2004, and three months later, her father was diagnosed with late stage cancer. This led her to write her first memoir, The Middle Place, which focused on her being both a daughter and a mother during this time.

“My background is as a storyteller, but I’ve also been interviewing people for PBS and my podcast for two years now, which involves an enormous amount of reading and highlighting and synthesizing,” Corrigan said. “For each guest, I have become a student for a few weeks.”

Corrigan is often curious about what her subjects’ first homes were like and how the people who made up those homes exist in her subjects’ minds.

Neuroscientist Lisa Feldman Barrett was a recent guest on Corrigan’s show. She said Barrett taught her that humans are contextual beings and develop in response to their environment.

“Our brains receive all of this sensory data in singular ways particular to our physiology, like what we see is defined by the width of the set of our eyes; what we hear is defined by the particular curve of our ears,” Corrigan said. “… Then our brains make predictions which determine our actions, which we then categorize into great, terrible, dumb, brilliant, hysterical, drab. The brain decides what the sensory data means.”

While one’s environment has an innate impact on one’s being, so does the media one consumes. Books, music, social media posts, advertisements — all of these impact a person’s reality.

As a child, Corrigan read Mandy, by Julie Andrews Edwards, which tells a story of an orphaned girl. Edwards is one of many creatives who has written about the struggles of being in an orphanage, as the idea of being lost and alone is palpable and easy to empathize with.

“What we feel, at least until we decide to unfeel it, is effectively what is,” Corrigan said. “There are so many coming-of-age stories, so many odysseys, that you might start to wonder if … each of us will, or does, or has had our own memoir-worthy version of a coming-of-age story.”

Corrigan began to read a short chapter of her memoir, The Middle Place. The chapter described her childhood home and fond memories with her father. It began with depicting the very beginning of Corrigan’s life. After her older brother, Booker, was born via cesarean section, the hospital advised her parents against having another baby.

“But the lore goes, my dad wanted a girl so much, they snuck me in,” Corrigan read. “I suppose it’s possible they could have had another boy, but it never seems like that when my dad tells the story.”

Corrigan then read about her childhood memories. While her brothers and their friends would play sports in the backyard, her dad would often return home with armfuls of supplies for his tomato garden. The young boys would offer her dad help, but he would refuse; he would never interrupt a game.

As Corrigan continued to read, she emulated her father’s voice with a raspy, Southern twang. George Corrigan would often refer to himself in the third person as ‘Greenie’ or ‘the green man,’ which was a nickname he was given by his brothers long before Corrigan was born.

“(He was given the name) after a long, cramped car ride when a case of gas reputedly turned the air around my dad green,” Corrigan read. “My mom hates (the nickname).”

Corrigan then shared a story about a dentist trip she took with her dad. After neglecting to get a partial plate on a front tooth, the tooth flew out of George’s mouth, requiring the visit to the dentist. When he was told it would be an hour wait, George and his daughter ventured into the farmer’s market, as George didn’t seem to care if he was missing a tooth in front of others.

“My dad’s relationship with the world (showed) that he paid more attention to the good stuff than the bad stuff, and effortlessly forgave almost all,” Corrigan read.

When her father would get her and her siblings ready for school, Corrigan felt a shift of attitude toward the morning.

“Cupping his hands around his mouth, he would call out, ‘Hello world!’ And then, playing back to himself in a one-man show, he would flip to the role of the world, ‘Hello, Georgie,’ ” Corrigan read. “ ‘I’m coming out there to get you, world.’ To which world would respond, as of course the world would, ‘I’m waiting for you, Georgie.’ ”

With this morning routine, Corrigan began to understand that not only was the world a safe place, but it had a sense of humor.

“(The world) knew your name, and it was waiting for you,” Corrigan read. “Hell, it was even rooting for you.”

She also felt at home at her maternal grandmother Libby’s house, but not as much at her paternal grandmother’s house. At Libby’s, Corrigan felt special, as if her presence was yearned for, as if it was needed.

“Looking back at these early homes and homes away from home,” she said, “there are stages I’m starting to think about: You are allowed here, you are welcome here, you belong here, this is yours.”

This is how America should feel to all who live here, but Corrigan explained why it doesn’t feel that way for everyone.

“I think about taking their country away from the people who already lived here, saying, ‘This is not yours,’ ” Corrigan said. “I think about slavery here and around the world for thousands of years, pulling people from their homes and forcing them to live in other homes.”

Since Corrigan left her first home, she has traveled to 29 places where she had a bed to claim as her own — from various college dorms, apartments and friends’ homes.

“I travel about 50 or 60 nights a year, for 15 to 20 years now,” she said. “I feel anxious and lonely in hotel rooms, so I stay with friends who say, ‘Make yourself at home.’ But that is a skill, that is a privilege, that is a progression.”

After reflecting on times when she felt at home, Corrigan came to her final conclusion, her eyes filling with tears: Sometimes, home is a person.

“My home was my dad,” Corrigan said. “And for a long time … he was the nurturer that shaped my nature.”

Corrigan then began to read a letter she wrote to her father five years after his death, with the first words being “Dear Greenie.” She began by updating her father about her children, but eventually admitted her struggles with surviving after his passing.

“My future is blank, and it scares me,” Corrigan read. “I have no ideas and no energy, and grief has made me a pessimist.”

Corrigan wrote about a trip she took back home, during the first year without her father, to visit her mother and her childhood home on a street called Wooded Lane.

“I was staying in my old room, the room where you finished your 48-year run at Wooded Lane,” Corrigan read. “… Somehow, there in the dark, pushing around to get comfortable, I got a whiff of you. I did not like it.”

While Corrigan and her mother both handled George’s death differently, they agreed not to judge each other. She recognized how strong her mother is, as she kept to-do lists of tasks that her husband would normally take care of for her.

The two attempted to play a round of Rummikub, as the family used to do prior to George’s death, with drinks and a platter of Triscuits nearby.

“With just the two of us, we ended up going to the boneyard over and over again,” Corrigan read. “… I turned on some music, but it was poor compensation for your wide-mouthed frog joy. … Your absence was so glaring, I had to leave (for a walk).”

When Corrigan returned home to California, she brought back George’s coaching jacket and wore it proudly to her daughter’s practice. Her daughter’s coach assumed Corrigan had coached as her father had, and even after finding out that she didn’t, asked if Corrigan would like to volunteer with the junior varsity team. She accepted the proposal.

“I get it, Greenie, I get it. The only way to keep you is to be you,” Corrigan read. “… A couple times a year, someone will stop and ask me my favorite question: ‘Are you George Corrigan’s daughter?’ I am.”