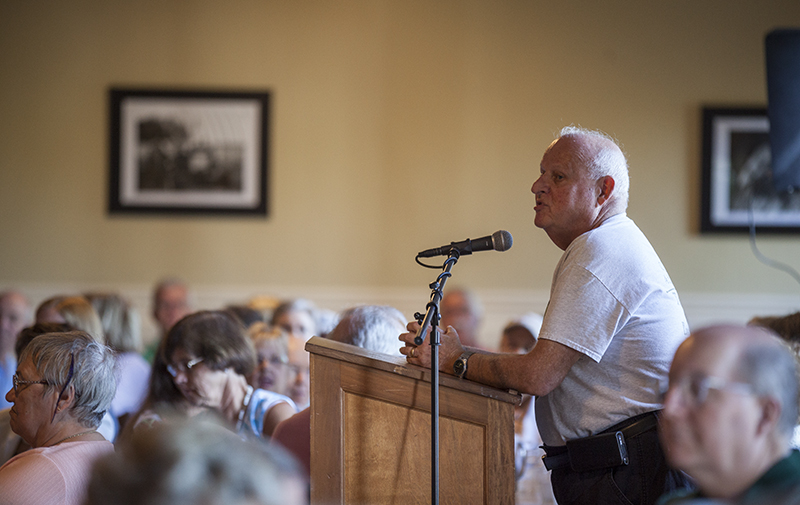 Chautauqua Institution property owners had a little change in scenery for their annual potluck dinner.

The annual dinner was held Wednesday at the Heirloom Restaurant in the Athenaeum Hotel after years of being held at Hurlbut Church.

According to Bill Neches, president of the Chautauqua Property Owners Association, the space became too small for the growing group. This year, more than 200 people attended the dinner.

Bruce Stanton, general manager of the hotel, gave a speech during the dinner, focusing on the different ways property owners can be involved and benefit from the hotel.

“To think, this is 135 years of service, and really it’s service to the Chautauqua Institution program and the overall guest experience,” Stanton said to the crowd. “It was very important for us to make the hotel more accessible to the Chautauqua community.”

The hotel provided attendees with vouchers to receive a free appetizer at the Heirloom Restaurant. Two years ago, the hotel moved away from an American dining plan (a fixed-price option that includes four courses). Stanton said that change, and the options it affords, can allow more people in the community to enjoy the hotel’s dining. Stanton also told the crowd that property owners booking a room for guests staying in town can receive a room for $99 a night.

Stanton said a minimum of  $500,000 from the Institution is pledged annually to renovate the hotel. This year, that money has gone into renovations to the hotel structure, rooms and to upgrade the sprinkler system.

Stanton said in the pre-season, the hotel has hosted 10 weddings and two Road Scholar programs, one of which was ranked in the top 15 programs to happen in May throughout all U.S. Road Scholar destinations.

Bob Jeffrey, a property owner trustee, said he’s seen the event grow consistently since its start about seven years ago and that having the event at the Athenaeum gives property owners a reason to come to the hotel and see what it has to offer.

The evening started with attendees gathering on the porch of the hotel for appetizers. The group then trickled into the restaurant. With the large number of people in attendance, some guests had to sit outside on the porch.

Beth VanDerveer didn’t mind. VanDerveer, a property owner who assists in managing the Lakeside Lodge, said she had “the best seat in the house” on the porch.

“[The event] is a wonderful opportunity to be able to meet other people, socialize, interact and have some great food,” VanDerveer said.