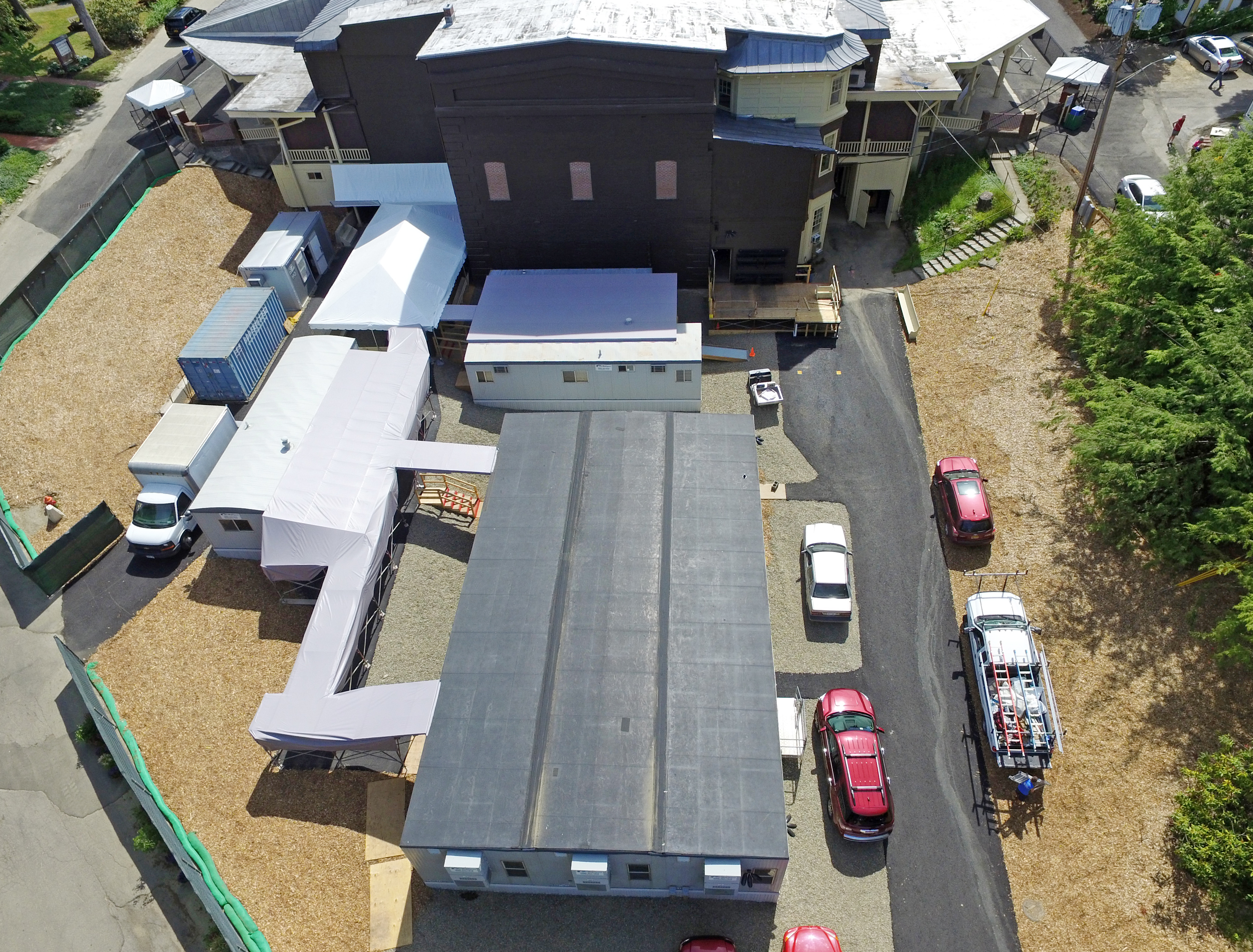 As Chautauquans arrive and settle in for the 2016 season, they will see the most dramatic evidence of Chautauqua Institution’s progress in implementing its complex $41.5 million Amphitheater renewal project is at the back-of-house.

Most of the old facility is gone. In its place is a meticulously planned Artists Village, a collection of five trailers and a large metal storage container. Those temporary structures are laid out on ground covered with asphalt and wood plank walkways, wood chips and gravel. A fence surrounds the site.

The largest of the trailers is a “triple wide,” consisting of three single units joined to form a large interior space that houses the Chautauqua Choir’s extensive sacred choral anthems sheet music collection, the Chautauqua Symphony Orchestra’s own substantial sheet music trove, a small office for CSO librarian Lara Sipols, space for choir co-librarians Jean Boell and Nancy Nelson, a small catering area to accommodate entertainers as needed, and a larger rehearsal space than was previously available in the old buliding.

“We will use this temporary space in the same way we have always used the old back-of-house,” said Deborah Sunya Moore, vice president and director of programming. “The piano is here. The catering area is here. There is rehearsal space. There is a drop area for some instruments, as before.”

Moore said she and her artistic team were consulted along the way as plans for the Artist Village developed. In particular, she cited Director of Operations John Shedd and his team.

“We were fully involved and are satisfied with this year’s temporary arrangements,” Moore said.

Until recently there was no climate-controlled storage for the choir’s and orchestra’s voluminous sheet music collection valued at more than $500,000. The choir alone has 1,432 titles of up to a dozen pages each, stored in 13 six-foot high lockers. This off-season, Moore said, “we moved the collections to music studios for winter temperature control. The trailers are climate-controlled. Now and in the future, we can take much better care of this invaluable asset.”

There are four other single trailers on the site. The smallest is the production office, which will serve as command center for Amp manager Keith Schmitt and his assistant, Art Breitenbach. The other three trailers are dressing rooms. Closest to the Amp is the star dressing room and there are two others nearby, which are more spacious than the rooms they temporarily replace.

Not all of the facilities from the old back of the house are gone, however.

“The dressing rooms for the concertmaster and soloist are still available where they were,” Moore said. “[And] there is still the one dressing room upstairs for anyone who wants to be directly backstage.”

Escorting visitors around the Artist Village recently as crews wrangled scaffolding and erected canvas covers to shelter the area from the elements, Schmitt acknowledged the difficulties of transitions he and his crew will face this season.

“There are obviously many differences from last summer, from a physical standpoint,” he said. “But we have things we can work with.”

Schmitt was on the grounds when the trailers were installed.

“As with any change, there are moments,” he said. “Once, I was walking along above the choir loft heading toward the door leading to what used to be my office. I went to open the door and go down the corridor to my office and just stopped short. There was no more office there. For just a moment, it felt like how an amputation must feel. Then the moment passed. But we all know progress means change, and the Amp crew is a big part of that this summer.”

Transitioning from the back-of-house to the new Artist Village took six months. After the Chautauqua Institution Board of Trustees approved the public works project in December and awarded a construction contract to complete work before the 2017 season, Institution staff and contractors moved to complete necessary preparatory work before the beginning of the 2016 season.

The most visible component of that work was the dismantling and removal of most of the 35-year-old back-of-house structure abutting the Amp bowl and organ chamber on the downhill side of the site toward Chautauqua Lake. Over a two-week stretch during the last half of February and into the first days of March, crews removed most of the offices, dressing rooms and storage space.

Also missing from the old back of the house is the long covered porch spanning the width of the Amp. That back porch served as loading dock, reception area for lecturers and performers after Amp appearances, storage space and informal gathering spot for miscellaneous groups including the Amp crew.

The back porch will be a prominent feature of the renewed Amp opening next year. For 2016, a temporary space has been constructed adjoining the southeast ground-floor exit from the Amp bowl, where many lecturers and performers will be available to meet and greet.