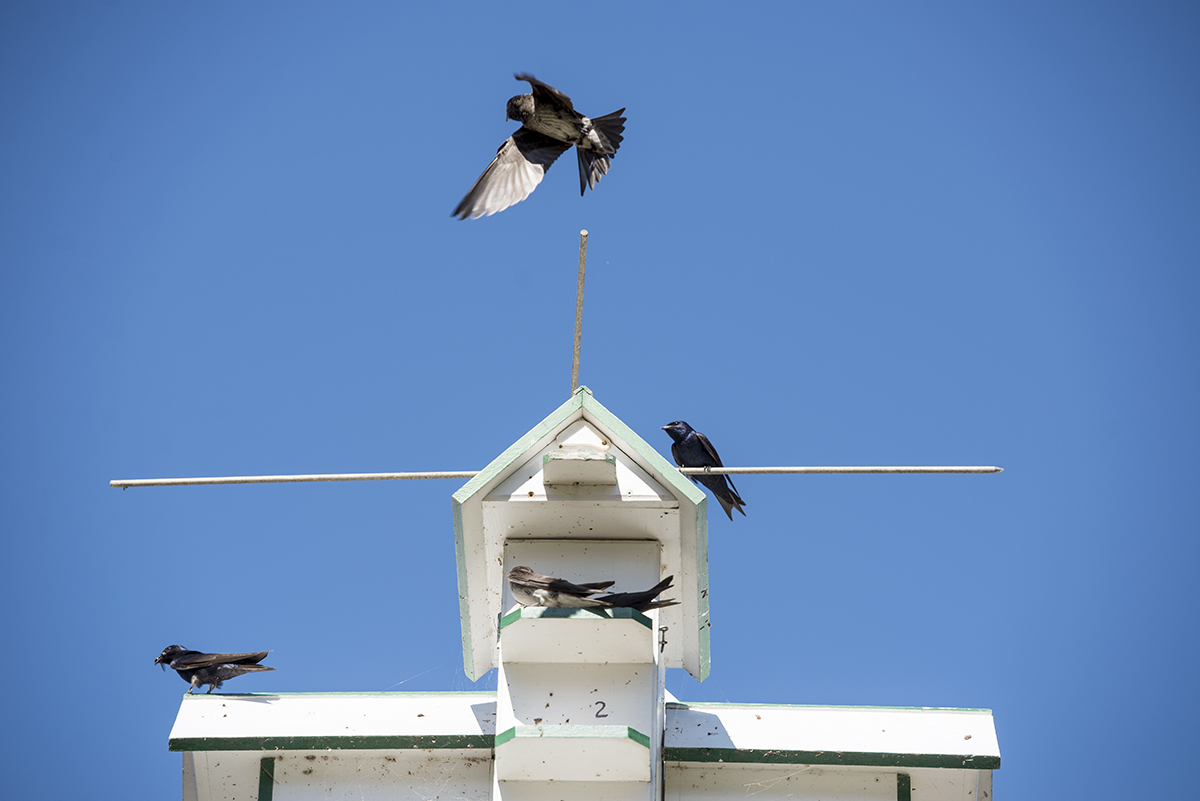 Jack Gulvin is the building superintendent for local bird condos, where the resident purple martins need not lift a claw.

Every couple days, he lowers the condos from their high-up perch to change out their pine needle bedding. He discards harmful blow fly maggots and sprinkles a special powder to eliminate mites and fleas. He even installed a special compartment in the penthouse of the bird condo to catch house sparrows — an aggressive bird that likes to squat in purple martin nests — with a spring-loaded trap.

Other than bluebirds, Gulvin said, purple martins are one of the only species to require that kind of pampering. The birds used to breed in woodpecker cavities and hollow spaces, but human development has largely cleared swamps and eliminated dead trees where purple martins take shelter.

“They are now, in the major part of the range, wholly dependent on humans,” said Gulvin, who has cared for Chautauqua’s purple martin houses for more than 15 years. He will give the last Purple Martin Chat of the season at 4:15 p.m. Friday between the Miller Bell Tower and Sports Club.

Gulvin retired from the National Park Service at 37, which means he’s spent more than a quarter century doing “whatever [he] feels like doing.” Currently, his summers are split between leading nature walks for the Bird, Tree & Garden Club and caring for Chautauqua’s five purple martin houses — one by the Sports Club, three by the John R. Turney Sailing Center and another by the golf course cart barn. He maintains a few more purple martin houses near his home in Westfield, bringing the total number of compartments he cares for to more than 130.

He’s also something of a professional recycler.

“I go to all these natural areas, and it also happens to be where a lot of young people go to drink beer,” Gulvin said. “I started getting in the habit probably 20 years ago of taking a bag with me and picking up the empties.”

That single bag has evolved into carloads, and it’s not uncommon to see Gulvin combing through trash and recycling bins across the grounds. He estimated he recycled more than 200,000 containers last year, collected from both individual bins and grocery stores like Tops. He periodically makes trips to the recycling center in his subcompact Honda Fit stuffed with more than 2,000 cans at a time.

“I cram them in there, wiggle myself in, and drive them down there, yank them out, give them a slip, they give me $130, I put it in my wallet, and, five minutes later, I’m out of there,” Gulvin said.

Eccentric hobbies such as recycling are part of what allows him to spend so much time caring for Chautauqua’s purple martins, a carryover from a childhood love of birds. He grew up nearby where he got involved with the Jamestown Audubon Society. Gulvin did some birding as a teenager, but didn’t work with martins until he was tapped by BTG to lead the chats.

Now Gulvin overflows with knowledge about those birds, including how martins are the largest species of swallow (not to be confused with the more common barn swallows with their long, forked tails). Although martins are native to the region, Gulvin said it’s more accurate to call them South American birds who vacation up north; purple martins embark on a cross-continent journey between the eastern United States and the Amazon Basin each year.

When Chautauqua’s new generation of purple martins soon take flight, they will gather in a staging area in Erie, Pennsylvania, to prepare for migration. Gulvin described how flocks of martins fill the sky over Presque Isle Bay in late summer as they come down to roost in the shallow, cattail-filled waters.

“In the morning, they all lift off into clouds that actually show up on the weather radar as these ghostly expanding donuts,” Gulvin said.

Martins then proceed south on a leisurely migration to the Amazon Basin where they spend most of the year. Once there, the birds take care of themselves; Gulvin said Brazilians would probably be shocked by the idea that the birds pooping on their cars are so pampered on the other side of their migration route.