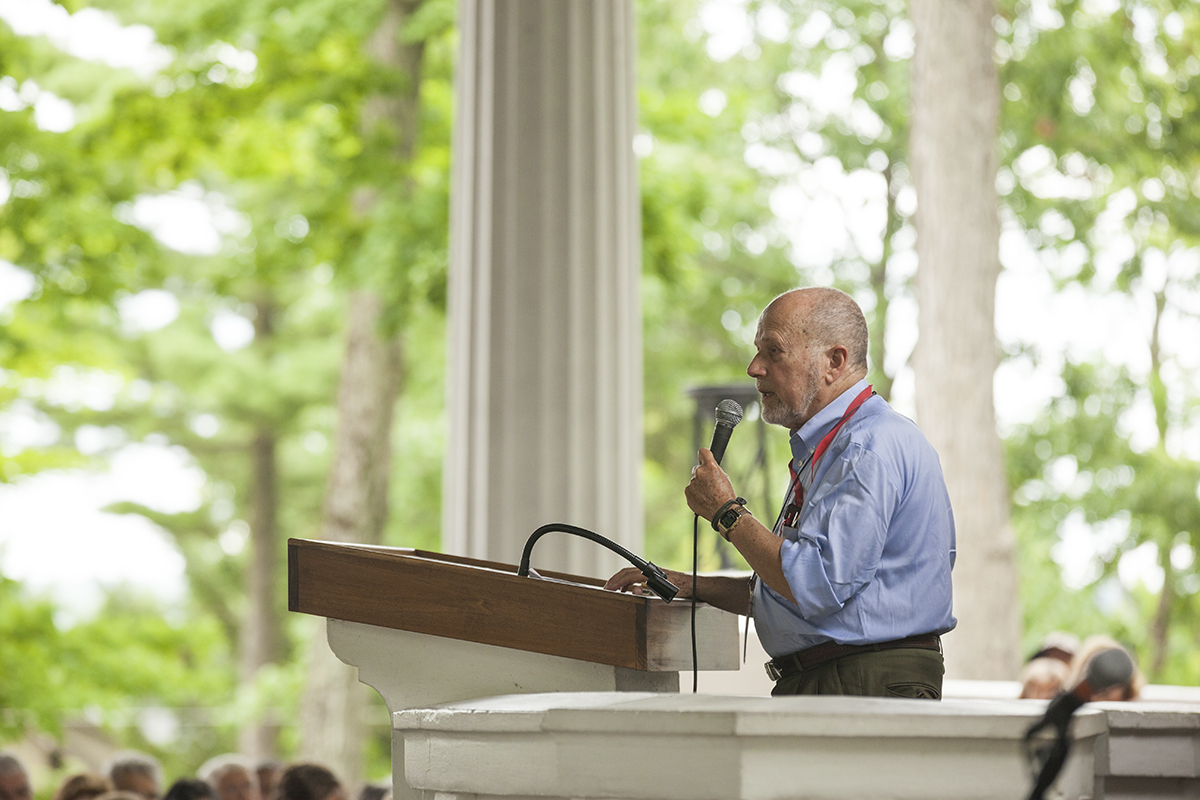 In 2014, the U.S. Department of Veterans Affairs announced the suicide rate for young veterans had rocketed to about 44 percent. Almost two dozen ex-military men and women ages 18–24 took their own lives each day, a number Janet Kemp, the VA’s national mental health director for suicide prevention, called “astronomically high.”

The usual reason psychiatrists give for that mental health epidemic is post-traumatic stress disorder, but Tuesday afternoon at the Hall of Philosophy, Jonathan Shay offered an alternative explanation he arrived at after more than two decades of caring for veterans. But to understand it, Shay said, it might be best to go back 3,000 years, to Homer’s Iliad and arguably the first case of moral injury in Western literature.

“Everyone not in a coma has heard of PTSD, and it’s not a bad description of the body’s reaction when someone’s trying to kill you and doing a pretty good job and you survive,” said Shay, a retired clinical psychiatrist with the VA. “But turns out PTSD doesn’t very well explain despair, and not explaining despair, it doesn’t explain the prodigious rate of suicide among veterans.”

In Iliad, Achilles is a high-ranking officer underneath his commander Agamemnon. Achilles takes the princess of Mynes, Briseis, after he led a successful assault on the city during the Trojan War. When Apollo forced Agamemnon to relinquish his own war prize, Chryseis, the commander, forcibly took Briseis from Achilles. Shay argued the theft was roughly equivalent to a sergeant tearing off the Medal of Honor from a member of his battalion and placing it on his own chest.

The result was that Achilles turned his back on Agamemnon and his soldiers nearly deserted. The reason? Moral injury.

PTSD is the persistence of the brain’s adaptations to war long after the battles have ended, Shay said, but moral injury occurs when someone in a position of legitimate authority (a commander) betrays what’s right (say, takes someone else’s possession) in a high-stakes situation (war). Agamemnon is a textbook case.

“When all three happen, the body reacts massively, as Homer shows,” Shay said.

It’s not simply an issue of an ethical dilemma, Shay said; rather, the body reacts physiologically, leading to increased heart rate and the feeling of literal gut-wrenching.

“Your body is reacting as if it’s being attacked,” Shay said.

There are three ways to fend off that attack, Shay said: ensuring cohesion by training, deploying and returning units together; appointing leaders who are experts, ethical and properly supported; and prolonged, cumulative and highly realistic training for what soldiers will be asked to do in war situations.

Shay said he explains that to military groups and they cheer, calling them combat multipliers and saying they want those, too.

“Yeah so, why are we doing such lousy job with cohesion, leadership and training?” Shay responds. “And that sort of becomes the Jesus moment in that military audience.”

The concept of moral injury is not just revelatory for the military, it’s also important in psychology and philosophy. Plato, Immanuel Kant and Sigmund Freud all believed someone’s personality and character were fixed by adulthood, Shay said, but the immense personality changes moral injury can cause in veterans show that view is “complete crap.”

Most alarming among those changes, Shay said, is that moral injury can leave veterans unable to participate in a democratic polity.

Shay said that makes for a fascinating historical question, as every citizen of Athens — generally considered the birthplace of democracy — was a soldier. How did they manage to keep democracy alive while continuing with the trauma and moral injury of war? The answer may be instructive in managing this issue today.

Shay argued it was precisely because every single citizen was a soldier and war was so embedded in the culture that democracy was able to survive amid constant conflict.

Greek tragedies re-enacted the drama of war, Shay said, creating what Aristotle called catharsis. In Greek, the word “catharsis” has three meanings: ritual purification, medicinal purgation and mental clarification or removing obstacles to understanding. Shay argued in that instance, Aristotle was referring to all three.

“My conjecture is that the distinctive character of Athenian theater arose out of political need to purify, purge and clarify civic understanding for its returning soldiers so they could again be citizens of a democracy,” Shay said.