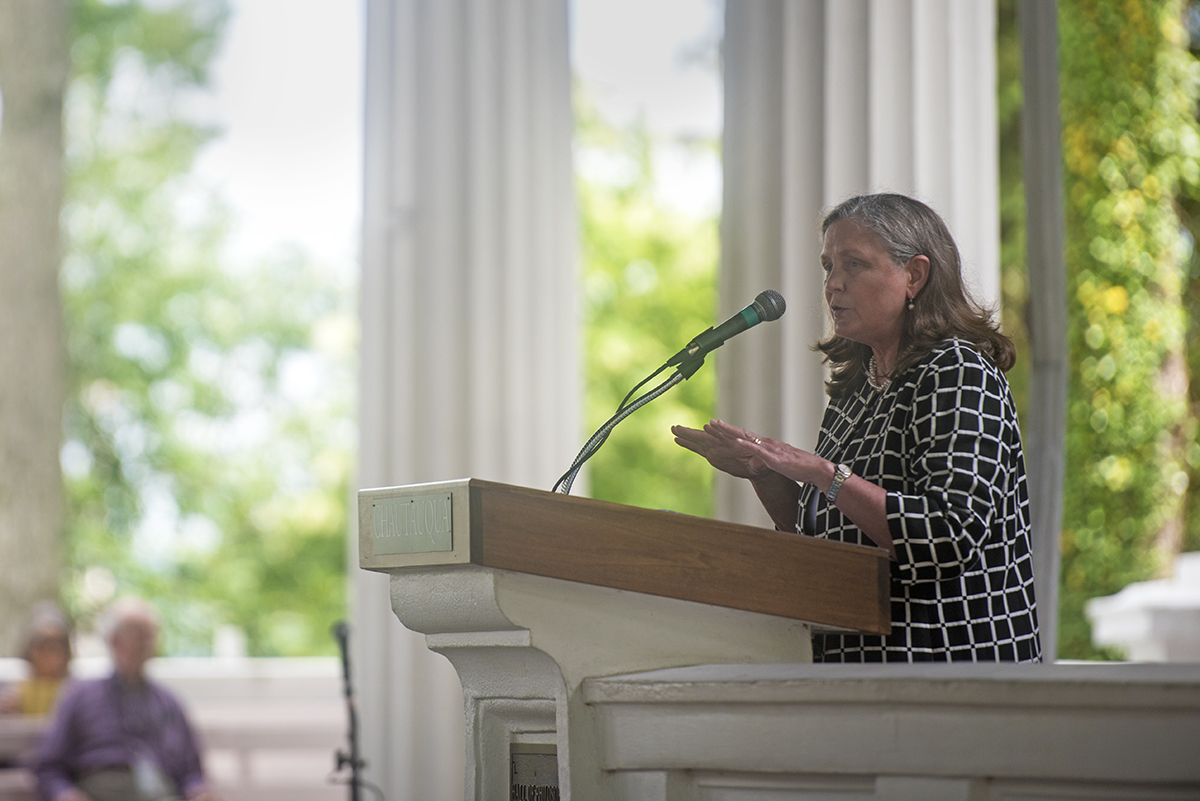 olivia sun / staff photographer Jan Love, dean of the Candler School of Theology at Emory University, delivers her lecture “Beyond Tolerance and Offense: Insights from an Ecumenical and Multifaith Journey” Thursday in the Hall of Philosophy.

Religious advocates have been working for three centuries to promote a common good.

Among their campaigns have been messages of multireligious understanding, economic well-being, safety for migrants and refugees, universal education and an end to sex slavery and violence, among others.

Jan Love, dean of the Candler School of Theology at Emory University, touched on these causes in her lecture, “Beyond Tolerance and Offense: Insights from an Ecumenical and Multifaith Journey,” as part of Week Four’s Interfaith Lecture Series, “Religion and Statecraft Today: The Soft Power of Global Peacemaking,” Thursday in the Hall of Philosophy.

Love first addressed the concept of soft power versus hard power. In each power lies the “ability of political activists to achieve their goals.”

To break down the terminology in hard power, incentives are nicknamed carrots and threats are nicknamed sticks. The United States, according to Love, has a “huge arsenal” of both. Conversely, soft power “co-opts people rather than coerces them,” which tends to produce more effective results.

“To the degree that the United States has ever really measured up to its aspirations to be a city on the hill or a model of democracy or, perhaps most importantly these days, a refuge for those fleeing religious persecution, our country has also had a tremendous stock of soft power over the years,” Love said.

Popular culture is a driving instrument for soft power, as demonstrated in media, like film or television, and sometimes in education and cultural exchange via the internet.

“Leaders at Chautauqua have invited us to mix religion and politics, something most of us were taught to avoid in polite company, but you asked for it, so here goes,” Love said.

Sri Ramakrishna, a 19th- century “Hindu mystic and guru,” said religion is like a cow: “It kicks, but it gives milk, too.”

One example of this is found in the thoughts of Charles Kimball, an ordained Baptist minister and scholar of Islamic studies. Kimball said the record of history shows nobility and service are key to religion, but religion also has direct ties with some of the poorest examples of human behavior.

“Does the witness of their followers demonstrate the power of the milk, or alternatively, the potency of the kick — or perhaps, in some cases, some mix of the two?” Love said.

Love spoke for her religious community, admitting that some, including herself, are guilty of “claim(ing) to be Christian.” Christians, she said, have a “notorious track record” for coming up short when admitting their wrongdoing or confessing their failure.

“A strong case can be made that the history of Christianity contains considerably more violence and destruction than that of most other religions,” Love said. “Whether or not most Christians agree with this assessment, many people of other faiths or no faith take it to heart. Indeed, many look upon Christians’ ardent, authentic and urgent evangelical calls for a conversion to Christ as profoundly and, for some, irreparably, tainted by the scandal of violence in the name of Christianity.”

These wounds, though, may have the ability to be healed by intentional people of faith.

“Obviously the Christian religious cow needs those of us who believe in Jesus Christ to demonstrate more clearly — in our personal and corporate lives — Jesus’ life-giving message of love and grace for all,” she said. “But violence is only one dimension, and an extreme one at that, of the interplay of religion and politics.”

This is where “two contending perspectives” arise: fundamentalism and pluralism.

To the degree that the United States has ever really measured up to its aspirations to be a city on the hill or a model of democracy or, perhaps most importantly these days, a refuge for those fleeing religious persecution, our country has also had a tremendous stock of soft power over the years,” Jan Love said.

Scholars have shown interest in the social implications of the ever-modernizing world for centuries, like industrialization and urbanization in the public sphere, along with others.

Sociologist Peter Berger described religion as a “sacred canopy,” noting that all of life could be explained by it. Post-modernization, the canopy was said to be ripped, according to sociologist Christian Smith, and “people are left with sacred umbrellas.”

During times of Protestant-specific modernization, people wanted to build “robust umbrellas” for as many believers as possible. On the other hand, fundamentalists were more inclined to keep an “all-encompassing canopy,” regardless of whether they were a believer themselves.

“(Today), most fundamentalists are medical doctors, nurses, engineers, teachers, professors, businessmen and college-educated mothers and fathers,” Love said. “They feel strongly that Western societies erred grievously when they replaced God, religion and divine law with human reason and secular political principles as the basis for legal and social order.”

Several well-known fundamentalist leaders, such as Gary Bauer, founder of Campaign for Working Families, James Dobson, founder of Focus on the Family, and Jerry Falwell Jr., president of Liberty University, never advocated violence, though, as a means to an end.

“Although fundamentalists’ traditional beliefs draw on the symbolic and organizational researches for their ancient religion, they are not merely conservative or orthodox believers,” Love said. “Fundamentalists see the world as a battleground between absolute good and absolute evil. Thus, they are spiritual warriors who oppose nonbelievers, as well as the doubters and compromisers within their own religious community. Fundamentalists and their sympathizers see their stand against the tidal wave of change as honorable, right, life-preserving and a life calling.”

Pluralists, on the other hand, believed America was founded on their ideals, prior to any modernization period. Diana Eck, founder and director of Harvard University’s Pluralism Project, said pluralism is more than “mere tolerance of differences.” Instead, the nation needs knowledge of its differences.

“The United States’ radical experiment in democracy, at the time, was imperfectly imagined and implemented in the midst of slavery, the conquest of native peoples and the formal disenfranchisement of men without property and all women,” Love said. “But part of the genius … was to reinforce emphatically that no religion would be established by the state and that each person would have religious freedom.”

There were two primary advancements, Love said, that would probably be surprising to most traditionally religious men of the past.

“Many Christians, especially mainline Protestants … and Roman Catholics have worked hard to cooperate ecumenically and for the most part, end their history of intra-religious strife and violence,” she said. “It’s basically over — thanks be to God. Chautauqua is a living illustration of this.”

Love said people of so many different communities — fellow co-workers, students, athletes, grocery shoppers and mall-goers — don’t have any idea of the religious identity of those they see often, nor do people understand their own traditions. As noted by Robert Jones in his Week Three Interfaith Lecture, there is a demographic decline in religious involvement.

One of the ways the nation can “promote the milk of religion rather than the kick” is by urging for pluralism at home and abroad. America has become deeply polarized, Love said. The nation’s mentality is now “pick up and leave or kick somebody else out.”

“In recent decades, we have developed highly refined, institutional and informational silos that perpetrate and reinforce our societal divisions both physically and digitally,” Love said.

After the 2016 election, the “escalating acrimony” has created doubt in Americans’ minds about what they have in common with fellow citizens.

Because of this, religious sanctuaries must be “countercultural places where dialogue is highly valued,” according to Love. They must be locations where we strive to bear with one another in love, as the apostle Paul said. For Love, this means deep exploration of the other, storytelling and “dialogue despite the offense.”

For example, Love partnered with “Farah,” an Iraqi Shia Muslim, and “Ananya,” a Hindu women — both names are pseudonyms — to gather women for a group called Partners In Dialogue, a South Carolina interfaith group documented by Harvard’s Pluralism Project. The women often met for meals and discussions, and eventually, some longed for more informal gathering, a place they could “pull off the shoes and the extra clothing.” During this time they shared special dishes, Scriptures and so on.

(Today), most fundamentalists are medical doctors, nurses, engineers, teachers, professors, businessmen and college-educated mothers and fathers,” Jan Love said. “They feel strongly that Western societies erred grievously when they replaced God, religion and divine law with human reason and secular political principles as the basis for legal and social order.”

In late March of 2003, the U.S. invasion of Iraq was expected to occur. Love worked with several ecumencial Christian groups to make a stand against it, especially because the invasion did not “meet the criteria of the Just War Doctrine.” Farah, however, was excited about the invasion, as she was “eager to see Saddam Hussein toppled from power.” She anticipated those who suffered because of him would be free.

“I was stunned by Farah’s position, particularly since the war would take place inside the country of her birth with all the suffering that war entails,” Love said. “But I remained respectful and eager to learn more about why she supported the invasion. On one level, it offended me, but I wanted badly to understand her point of view.”

During a formal sharing period of feelings toward the invasion, Love decided to recite Matthew 5:3-10 — the Sermon on the Mount, which begins with “Blessed are the poor in spirit, for theirs is the kingdom of heaven.”

She cried through the whole reading. Despite their differences, Love and Farah are still friends.

“Interfaith discussions about tender topics are not easy,” Love said. “They can even be offensive. But we must engage anyway. We must seek greater understanding, not agreement, but understanding, if we are to preserve the freedom of religion for us all.”