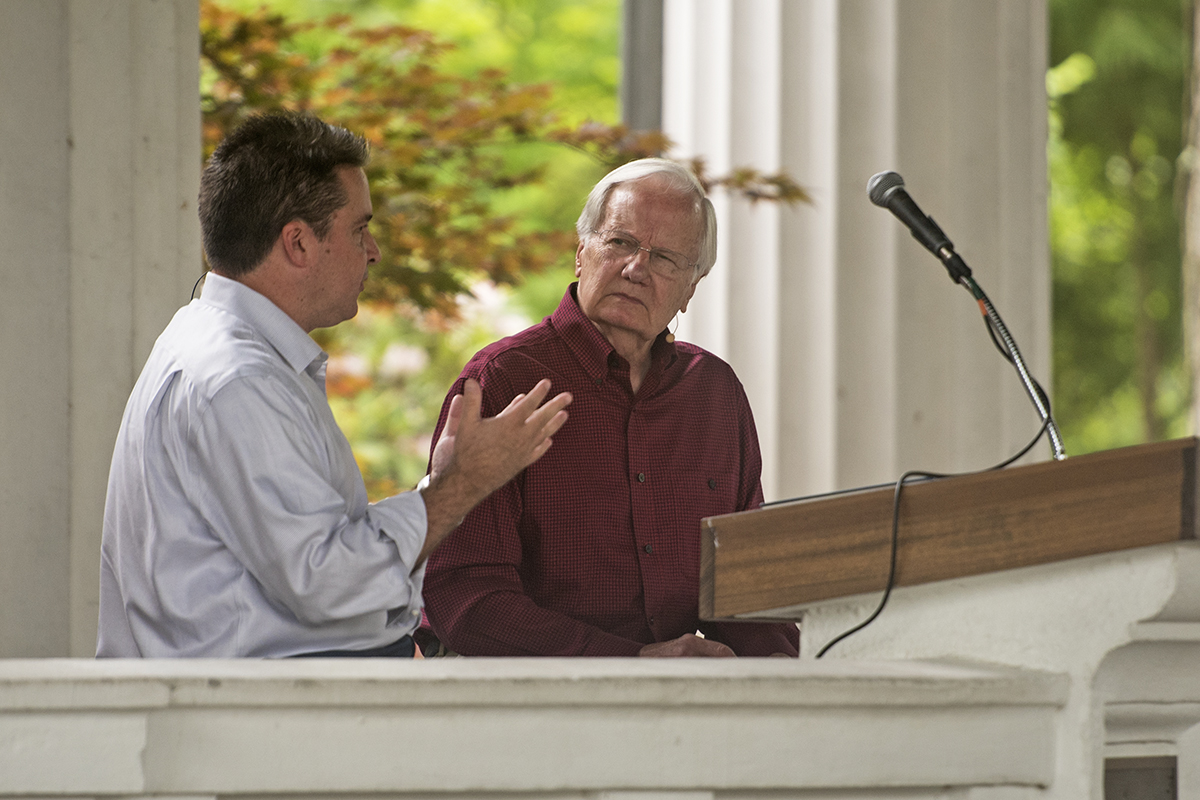 Robert P. Jones, CEO of the Public Religion Research Institute, and Bill Moyers, former White House press secretary, exchange in a Q-and-A session during "What the End of White Christian America Means for our Shared Sense of National Identity" on Monday in the Hall of Philosophy. OLIVIA SUN/STAFF PHOTOGRAPHER

Robert Jones thinks “white Christian America” has died. And he wrote the obituary to prove it.

Jones, the author of The End of White Christian America and founder of the Public Religion Research Institute, grieved the loss of this demographic with an introduction and interview with broadcast journalist Bill Moyers, as part of Week Three’s theme “A Crisis of Faith?” Monday in the Hall of Philosophy. This conversation was titled “What the End of White Christian America Means for our Shared Sense of National Identity.”

Moyers read Jones’ book before it appeared on shelves, so he had a good grasp on the content before introducing the author. The title, Moyers said, concerned him due to the demographic on which it focused.

“I thought, ‘The author’s talking about me! ‘I’m going to be extinct!’ ” Moyers said.

He handed over the presentation to Jones, who opened up his lecture in mourning for white Christian America. That demographic, which spanned nearly 240 years, is now dead as the majority. Through “environmental and internal factors, complications stemming from major demographics changes in the country … and religious disaffiliation of its many younger members,” white Christian America is decaying.

The demographic, Jones said, produced a “dizzying area of institutions — from churches to hospitals, social service organizations and civic organizations,” including the Boy Scouts, Girl Scouts and the YMCA.

But despite these contributions to society, white Christian America’s reputation was “marred” by its acceptance of several social constructs: slavery, segregation, and recent opposition to LGBTQ rights.

At the close of his obituary for white Christian America, Jones said the demographic was survived by mainline and evangelical Protestants.

“It’s a tradition among my people there that when there’s a funeral, you lay out the body, right?” Jones said.

And during the rest of his lecture, this was Jones’ intent.

And to prove it, Jones presented a series of numbers — which he knew his audience might wrestle with if he called them statistics.

“Think of these (numbers) as vital signs,” Jones said. “If we’re looking at the chart that was hanging on the hospital bed, here’s what you would see toward the end of white Christian America’s life. The most dominant one, one that really led me to write the book, was this realization that we had passed a very significant milestone in this country and that virtually no one was talking about that.”

This turning point, when the nation was no longer a majority white, Christian nation, happened within two election cycles. If someone grouped “any stripe of (white) Christian together” in 2008, 54 percent of the country would qualify. In 2016, that percentage dropped to 43 percent.

Taking a look at the generation divide, Jones said, provides a “portrait of continuation.” According to research from PRRI, 65 percent of seniors identify as white and Christian, but only 22 percent of those around age 30 do. Accordingly, white Catholics, “the most vivid public presence in our shared civic life,” have 26 percent of seniors but only 8 percent of young adults in their camp.

Jones has one primary reason in mind for this generational, cultural shift: same-sex marriage. In 2008, before President Barack Obama publicly supported same-sex marriage, 40 percent of Americans supported the institution. Today, this number has leaped to 63 percent.

“There’s not many public opinion measures that you can see that kind of movement on,” Jones said.

So to illustrate this movement, Jones referred to what he called “the Three D’s” — demographic change, declining birth rates and disaffiliation.

The surge in immigrants from Latin America over the last few decades has altered the American makeup. At the same time, birth rates have begun to wane among white Christian women, Jones said, due to an increase in college degrees. And finally, because of several clashes with the older generation — over views on climate change, perspectives on science and evolution, LGBTQ rights — the younger generation is separating itself from the faith.

To understand this phenomenon, Jones said Americans need to pay attention to voting margins in the last election. Out of 137 million votes, the election’s outcome depended on 77,744 votes in Pennsylvania, Michigan and Wisconsin that turned it around.

“The other thing to remember, in the American context, is that the ballot box has essentially functioned kind of as a time machine in United States politics,” he said, “and what I mean by that is that we don’t see the demographic changes that we have in the general population reflected quite yet at the ballot box, mostly because white Christians (turn out in) much higher rates than other Americans do.”

To try to decrypt these votes, Jones said, the nation must first try to decrypt President Donald J. Trump. Trump received roughly 81 percent of the vote among white Christians, this number being similar to the support raised by the four most recent Republican presidential candidates.

“But one thing I realized is that it was remarkable how little policy seemed to matter in this election,” he said. “There were no great policy debates about the big ideas. What we essentially had was a battle about two competing visions of who the country should be, in light of the cultural changes we are experiencing.”

It can be boiled down to the candidates’ slogans, Jones said. With Trump’s “Make America Great Again,” Hillary Clinton’s “Stronger Together” and both candidates’ accompanying artwork, he said the messages were clear.

“Remember, the most important word is that last one: ‘again,’ ” he said of Trump’s slogan. “What does it mean? ‘Like it was before.’ Before what? … Hillary Clinton’s logo, (was) this very slick and modern-looking ‘H’ with this arrow pointing ahead. So you have Donald Trump explicitly kind of pointing backward and Hillary literally pointing forward. … That was really what the debate turned out to be about.”

Some of Trump’s support, Jones said, may have emerged from white evangelicals due to their fear of losing things of the past.

But one thing I realized is that it was remarkable how little policy seemed to matter in this election. There were no great policy debates about the big ideas. What we essentially had was a battle about two competing visions of who the country should be, in light of the cultural changes we are experiencing. – Robert Jones

“I think what we saw in this election was this transformation of self-described ‘values voters’ into being what I call ‘nostalgia voters,’ ” he said. “They were animated more by anxiety about a lost past than they were about a set of enduring principles.”

Another poll conducted by PRRI asked voters if they thought, generally, if things have changed for the better or worse since the 1950s. As it turns out, the nation was evenly divided in their responses, producing “almost perfect partisan polarization” in their opinions, Jones said.

Another research question asked if an immoral act committed in a candidate’s private life had any effect on their ability to “behave ethically and fulfill their duties in their public life.” White evangelical Protestants, “with Trump at the top of the ticket,” abandoned their prior code of conduct, claiming private affairs had little to do with public integrity.

“No matter how many Christian conservative leaders (are) installed in positions of power the next four years, I think there’s little chance we’re going to look back ultimately at this election and celebrate it as the revival of white Christian America,” Jones said. “Rather, I think this election is going to be one that’s remembered as the one in which white evangelicals traded away their integrity in a gambit to resurrect their past.”

He said “turning (back) the clock” may prove alluring to white Christian evangelicals, but their attempts to do so are disrespectful to the rest of society.

Both white evangelicals and white mainline Protestants remain prominent forces in the country, he said, but they need to make a choice between keeping to themselves in retreat or engaging with marginalized groups in new ways. A “self-imposed marginal retreat” could be uncomfortable for a demographic, Jones said, that has seen itself in power for so long.

“If this option proves unsatisfying, the only other course, as I see it, is a different kind of social arrangement, in which white evangelicals and white mainline Protestants find their seats at the table, alongside Catholics, Jews, Muslims, Hindus, Buddhists and the religiously unaffiliated,” he said. “And this time, they will be guests rather than hosts.”