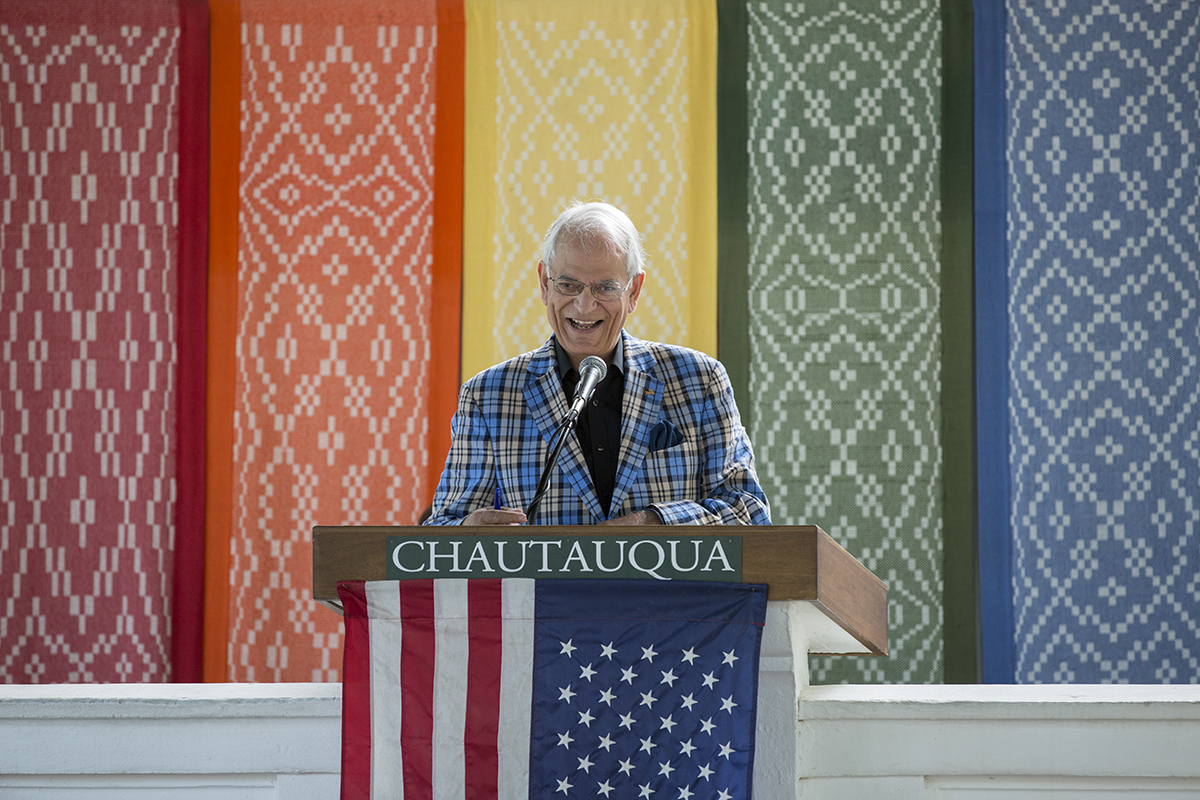 Before Khalid Qazi said anything else in his Interfaith Lecture, he offered a simple blessing: “Peace be with you all.”

Qazi, founding president and senior adviser at the Muslim Public Affairs Council of Western New York, delivered the first lecture under Week Two’s interfaith theme, “Celebrating the Genius and Soul of a Nation,” Monday in the Hall of Philosophy.

Qazi opened his lecture with a discussion of the Great Seal of the United States’ traditional motto: E pluribus unum, which was also the title of his talk. The phrase translates to mean “out of many, one.” Its roots lie in the English periodical The Gentleman’s Magazine, which halted publication in 1914 after 183 years. Magazine staff used the term to signify how many people it took to complete its final product. And so it went for America, too.

“The theme truly encapsulates the essence of our nation,” Qazi said. “It should be in mind for all of us, especially in times like this, how amazing our nation is. How it represents all those that (came) under one nation, under one flag. Since its inception … it is still the new kid on the block.”

“We have this marriage of identities,” Qazi said. “I think we are making progress; I can tell you that for sure, in spite of the fact that we might be hearing otherwise from the ‘tube.’ ”

In fact, Qazi said, Islamic ideals are not far from American ones. The character traits of mercy, justice, peace, human dignity and equality for all are communicated in the Quran, Islam’s holy book. “Like all other concerned citizens,” Muslim-Americans are anxious about the direction of the nation, Qazi said, and see a “dichotomy of opinion” regarding how other Americans see Islam.

Some Americans, for example, are aware of Muslim culture through their Muslim friends or co-workers, their travel to Muslim countries or their study of Islam. Qazi said Muslim-Americans are just like everyone else, going through their daily lives. He said other Americans have a negative attitude and “only tune into Islamophobic media figures and outlets.”

“For them, Muslims are not peaceful people, they do not respect human life … Islam is an enemy and has to be confronted, defeated, eliminated at any cost,” Qazi said.

This perspective, he said, has increased during the presidency of Donald Trump, with Islamophobia becoming a “mainstream” fear due to suggestions and statements made by the president.

“We hear calls for people establishing Muslim-free zones, and we read statements like, ‘We hate you and we will burn you,’ ” Qazi said. “ ‘Kick them out and put the rest in the detention camps.’ ‘The only peaceful Muslims are dead ones.’ ‘Hard to tell what we should do first, build a wall or a gas chamber for Muslims.’ ”

Muslims have been a part of America, however, for generations. According to Denise Spellberg’s book Thomas Jefferson’s Qur’an: Islam and the Founders, Jefferson first picked up the Islamic holy book when he was 22 years old, 11 years prior to his writing the Declaration of Independence. And “Jefferson’s intellectual hero,” John Locke, wrote about Muslim civil rights, saying Muslims were not to be excluded. America’s first president, George Washington, also called for receiving the “oppressed and the persecuted of all nations and religions who we shall welcome to participation of all of our rights and privileges.” This last statement may have been communicated ironically, though.

“Washington may in fact never have realized that as a slave master, he was denying Muslims in his own plantation … (the) rights he was advocating for them,” Qazi said.

Regardless of the context, these early thinkers were said to create political discourse across the nation. Not only did “famous political elitists” advocate for Muslim civil rights, but many Americans “(got) over their political bias” and encouraged fair treatment as well. However, those Americans of the past might have been speaking about a minority that was still hidden in some parts of the country.

“Jefferson, Madison, Washington, et cetera, most of the times were talking about imagined Muslims,” Qazi said. “Today, the presence of Muslims is not imaginary anymore. Today, the United States is called dynamic, (with) diverse and vibrant Muslim communities across the nation.”

Past presidents sent this message by inviting Muslims to the White House for regular iftar dinners, the meal breaking the fast during Ramadan. In order to recognize the contributions of Muslims working within their departments, secretaries of defense and state have held iftar dinners, as well.

“We thought, ‘This is an established tradition, right?’ ” Qazi asked. “Alas, no, this tradition was broken this year. This year President Trump chose to please his alt-right supporters and did not have the traditional dinner in the White House. That was painful.”

The main way Qazi knows to combat this treatment is to continue his own education. He said 20 percent of the Quran is dedicated to this very topic — indicated in statements like “Recite: in the name of thy Lord who created man from a clot. Recite: and thy Lord is the most generous who taught by pen, taught man that which he knew not.” This idea is communicated multiple times in the Quran.

“ ‘Seek knowledge from the cradle to the grave,’ ” Qazi quoted. “ ‘Seek knowledge even if you have to go as far as China.’ … Prophet Muhammad did not preach, but he practiced what he preached. This is, to me, an example that every Muslim … needs to hear, learn and follow.”

With that idea in mind, Qazi said, E pluribus unum can, and will, remain intact.

“This simple 13-letter phrase … is the foundation of our nation and is what sets us apart from all other nations,” he said. “Yes, we are going through a difficult time in our journey to make a more perfect union; yes, today global and national events challenge us for self-introspection and self-analysis. … What better time to recognize the genius and soul of a nation?”

Morning Worship: Holmes reflects on living in the light while traveling