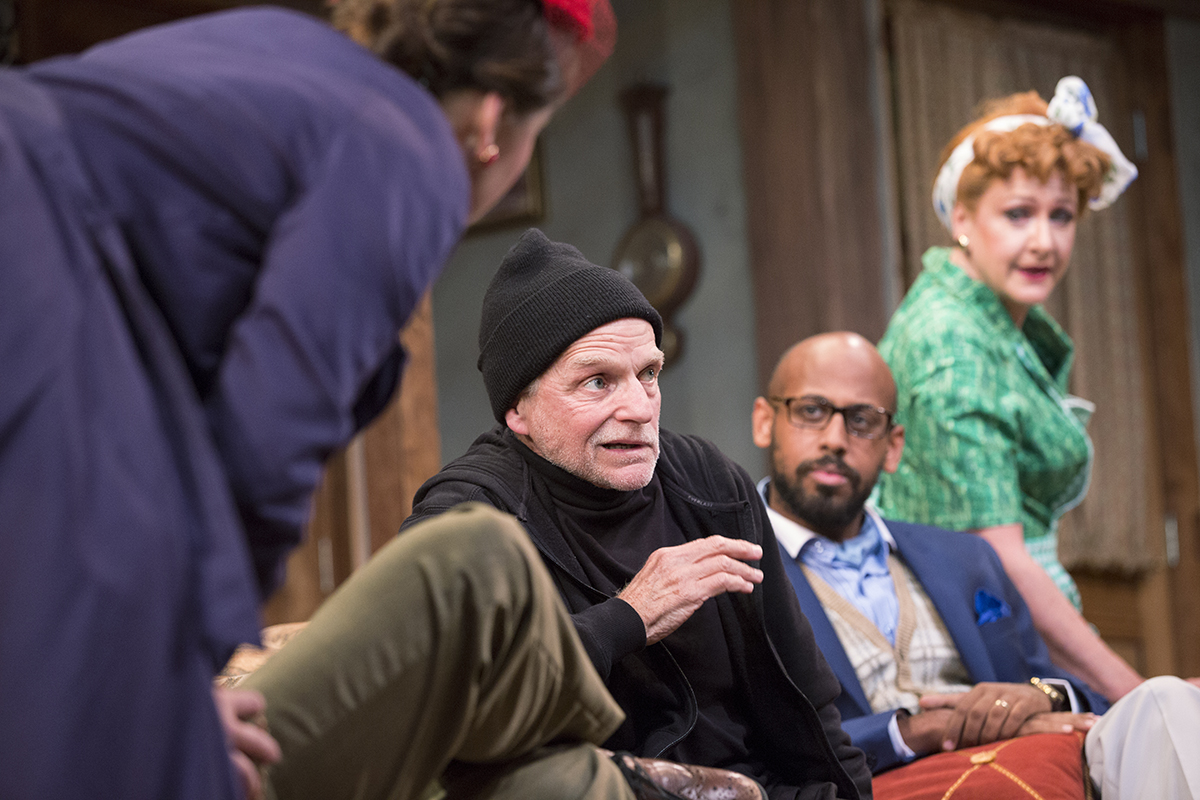 Actor John Seidman moves with a sort of impish gracefulness as Selsdon Mowbray in Chautauqua Theater Company’s production of Noises Off. As everything is falling apart around Selsdon in the farcical play within a play, the veteran stage actor is perhaps the least bothered by the chaos.

If Seidman appears comfortable in the role of Selsdon in the CTC production, which resumes its run at 4 p.m. Wednesday in Bratton Theater, it could be his several decades of theater experience. It could also be because he’s played the role before — sort of.

Thirty years ago, Seidman portrayed Tim, the stage manager and jack-of-all-trades for the fictional production of Nothing On at the heart of the Noises Off plot.

When Act 1 opens, Tim is a sleep-deprived workhorse making last-minute set repairs. By Act 3, he is onstage performing in Selsdon’s burglar costume. (As an aging actor with a drinking problem, Selsdon naturally can’t always be counted on to portray his character in Nothing On.)

Seidman, a New York-based actor, won the part of Tim in a production at Seattle Repertory Theatre, right when Noises Off was starting to appear in regional theaters. The original ‘Noises Off’ debuted in London in 1982 and came to Broadway in 1983.

The Seattle production was a hit, Seidman said, with talk of extending its six-week run.

“Whatever was a challenge, they did nail down because it kind of went off flawlessly,” Seidman said. “And we were amazed because it’s all about people moving quickly past opening and closing doors.”

A favorite part of playing Tim was opening the second act with Poppy, the assistant stage manager character, Seidman said. The two crew members are fiercely trying to keep the show under control from backstage, but end up ignorantly repeating the front-of-house calls and confusing the audience from the start.

Although he enjoyed being in the production, Seidman said he didn’t consider returning in a different role back then.

“I doubt that anybody does when they are performing this play because I think it’s so all-consuming you don’t really think about that,” Seidman said. “You rarely do, or I rarely have ever been in a play and thought, ‘I’d like to try that.’ ”

But when CTC Artistic Director Andrew Borba approached Seidman about playing Selsdon last year, Seidman agreed and began looking forward to the part. Seidman has performed in several CTC productions over the years, last appearing in 2014 as Gonzalo in The Tempest.

Taking on the role of Tim in the CTC production is conservatory actor Will Harrison. Seidman said Harrison is doing “wonderfully well” in the role and also has more opportunities than he did in the show. Since the premiere of Noises Off, playwright Michael Frayn has made several updates to the script, and the CTC production uses the 2012 version.

Harrison happened to be the first cast member Seidman met when he arrived for rehearsal, which began June 6, but the two didn’t talk about their shared theater history until later.

“Eventually I told him, but he sort of wasn’t looking for tricks or answers,” Seidman said. “He’s got a great mind and a great, open sense of adventure.”

The CTC cast includes three guest actors, with Seidman being one of them, and six conservatory actors comprising the rest of the cast. Seidman expects learning the show will serve Harrison, and the other young actors, well in future years.

“There are certain plays, and I realize this is one of them, where the work that goes into learning, it can be so exhaustive that it pays to try to put it into your toolkit somehow,” Seidman said.

Noises Off is certainly a workout, but Seidman said he noticed the script is a bit easier on Selsdon. While most characters are galloping up and down the stairs of the two-story set, Selsdon’s character often remains on the first floor.

The intensity of producing Noises Off makes the show “a huge bonding experience,” Seidman said. He said he’s chatted with actors who have been in other productions of the show and the backstage stories are always positive.

Seidman’s takeaway from performing Selsdon is equally positive. Even in Selsdon’s many comedic moments, he expresses a real devotion to the theater.

“While the whole play is all about just trying to hang on to the immediate tasks at hand, the minute-by-minute work of the theater, he has this opportunity to remind us about the lifelong importance of the theater,” Seidman said.