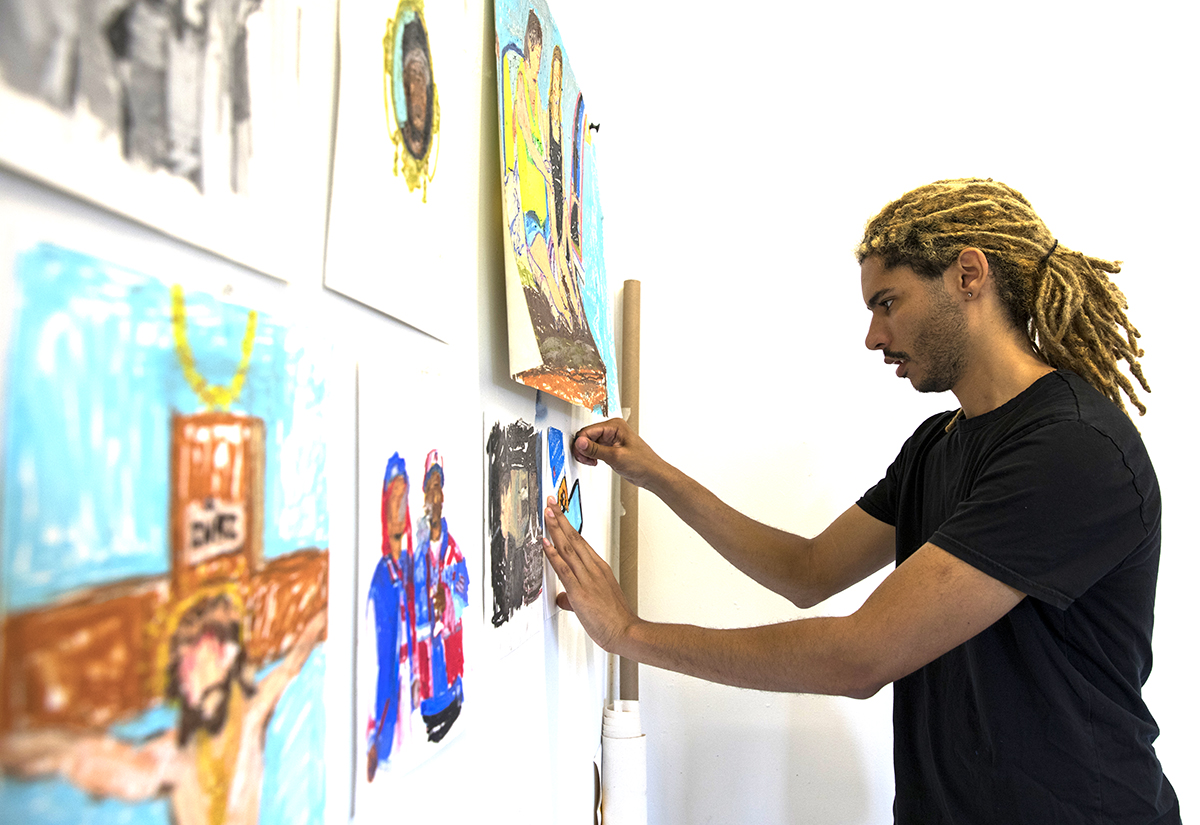 On a mild July evening, art students gathered on the School of Art’s grassy quad and debated what to call their fast-approaching pop-up art show.

A few suggested doing an online poll, but Katherine Plourde, the show’s organizer, insisted on an immediate decision — she needed a name to put on posters.

Fortunately, 30-some heads think better than one. When put to a vote, a winning title emerged: “Don’t Tap on the Glass.” The pop-up show, which will feature small paintings, drawings, ceramics and sculpture, opens at 8:30 p.m. Monday in 2 Ames.

Dylan Mize, one of 39 students in this summer’s Visual Arts at Chautauqua Institution’s School of Art, said the show’s title references the open architecture of the U-shaped Arts Quad. Mize said passersby frequently peer into the windowed studios, hoping to glimpse the artists at work.

“Chautauquans are very interested and curious about what we’re doing,” he said.

Mize, who earned his B.F.A. from the University of Central Missouri, has two small oil paintings on wood in the pop-up show.

Plourde, who is spending her second summer working for the School of Art as assistant to VACI Managing Director Lois Jubeck, said the pop-up show is a new chance for students to display their work at Chautauqua.

“It’s going to be really exciting,” she said.

Part of the opportunity is due to the new presence of the 2 Ames restaurant. Plourde was glad that Danny Borg-Sundstrom and Jeremy Hois, 2 Ames owners, agreed to host the show.

“Hopefully in return they get a lot of business that night and that week,” she said.

The pop-up show will be more casual than the larger annual student show held in the Fowler-Kellogg Art Center. Pieces are smaller and students submitted their own picks rather than having a jury or a curator select pieces. Students, with help from Plourde and VACI gallery assistants Becka Marsh and Joni Sullivan, installed the show and will take it down themselves this weekend.

Zarina Zuparkhodjaeva, another student at the School of Art, will show three small works on paper for “Don’t Tap on the Glass.”

She recently earned her M.F.A. from American University in Washington, D.C. Her works, painted amalgamations of city infrastructure and construction, have been influenced by her time spent in cities. She grew up in Tashkent, Uzbekistan, lived in New Delhi and has visited Moscow several times. Seeing constant construction in D.C., all the “orange netting and cranes,” has particularly impacted the imagery she uses.

“With my paintings, I’m hoping to reconstruct what I’m seeing, with juxtaposing very rigid geometric lines against more fluid and organic brushwork to highlight the tension,” she said. “I’m interested in seeing how I can show a suggestion of human activity or human construction without actually showing the people,” she said.

Like Zuparkhodjaeva, Sarah Norman earned her M.F.A. at American University. A painter, Norman likes to read and listen to music for inspiration. She circles phrases in her hefty poetry anthology and picks out whimsical lines from songs, imagining how she can represent them visually. One of her works in Fowler-Kellogg, “If this is paradise, I wish I had a lawnmower,” was inspired by the Talking Heads’ song “(Nothing But) Flowers.”

“I wouldn’t say that my paintings are quite narrative,” she said. “They hint at something happening, but all the information might not add up into one cohesive story that you would read like a book.”

Six days before the pop-up show was due to open, Norman hadn’t yet chosen any pieces to hang at the show.

Another School of Art student, Paul Verdell, also works from photographs, but those aren’t his only inspirations.

“I do these pastel drawings – they’re generally of hip-hop or rap album covers or photography,” he said.

Verdell said he’s also interested in incorporating images of black culture into his work; a few figures features in his pastels are Malcolm X and Kanye West. He also works from life or looks at art books — for a large painting depicting the Republican elephant and the Democratic donkey being attacked by a black panther, Verdell looked at Picasso’s 1934 “Bullfight” painting for inspiration.

Verdell found out about VACI’s School of Art through one of his mother’s co-workers.

“She said that they had a really good art school and if you are a painter, this is the place to come,” he said.

A rising senior in the B.F.A. program at Bowling Green State University, Ohio, Verdell is using this summer to brainstorm for his senior thesis. He said he’s also enjoyed getting to know other students and Chautauquans.

“Don’t Tap on the Glass” will be an opportunity to do just that.

“I think the more shows the better, to get people more interested in art and the work that is being made in these studios,” Verdell said. “The more interest we can get — the Chautauquans or people even visiting Chautauqua — the better.”