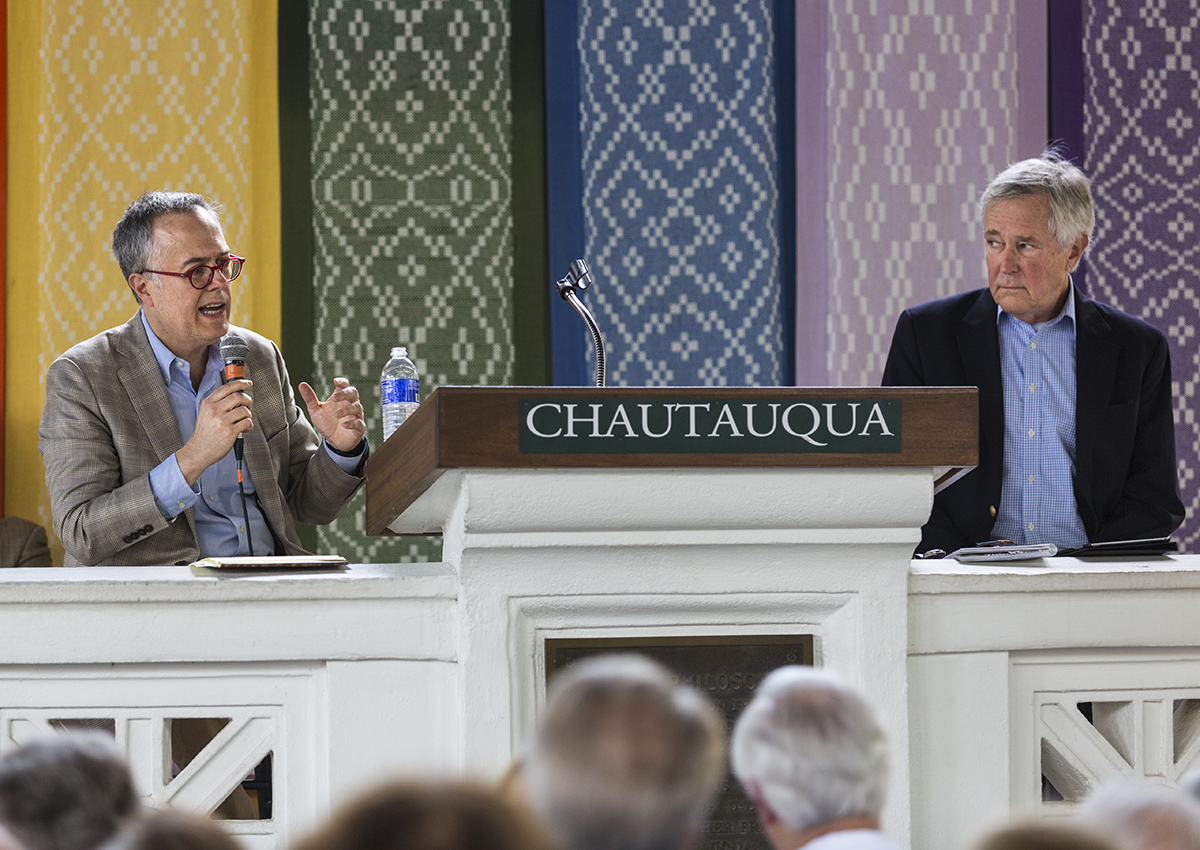 Michael Gerson, left, columnist for "The Washington Post," speaks on politics and faith in the era of President Donald Trump during a conversation facilitated by James Fallows, right, Monday in the Hall of Philosophy.

When Michael Gerson began his lecture in the Hall of Philosophy, he said he struggled with his introduction, “given the pace and disturbing nature of recent history.”

In a talk titled “Five Things Everyone Should Know about Politics in the Age of Trump,” Gerson and James Fallows, national correspondent for The Atlantic, kicked off the interfaith component of Week Eight’s “Media and the News: Ethics in the Digital Age” Monday in the Hall of Philosophy.

To start, Gerson, a columnist with The Washington Post, explained he was not “obsessed with (Donald) Trump” but joked that his wife started charging him a $20 fine for every mention of the president — and at this point, she was close to buying a Range Rover.

But all kidding aside, Gerson said he was disturbed by the president who was putting him in debt.

Indeed, parts of the country are becoming “increasingly homogenous,” with numbers peaking in the 2016 election — Gerson said 80 percent of counties gave Trump or Hillary Clinton a landslide victory. In the 1970s, these decisive victories only occurred in approximately 25 percent of counties. This “polarization is not just a function of Washington dysfunction,” Gerson said, but in most instances, Americans’ view of the opposition is continually becoming more negative.

“There are many other factors in polarization: the growth of partisan media, which provides not information but ammunition,” Gerson said. “There’s the power of technology to mobilize factual interests and allow people to live in filter bubbles. There’s gerrymandering, leading to the constant fear of politicians that they’ll be primaried if they lack ideological purity. The result is the careful weaving of cocoons.”

Americans cross a specific line when they stay in these cocoons and start to see their fellow citizens as their enemies.

“Our democratic institutions aren’t designed for disagreement; they are undermined by mutual contempt,” he said. “Unfortunately, the incitement of contempt can work politically, at least in the short term. We’ve seen this kind of leadership that fans frustration into fury. This kind of divisive politics has the chemical advantage of lighting up the limbic system, the powerful emotional center of the brain.”

The hypothalamus leaves people with four responses to stress: fighting, fleeing, feeding and mating. These actions, Gerson said, lead to trouble in democracy.

“When the other side is viewed as evil, then collaboration is not only hard — it is wrong,” he said. “Compromise and comity become not virtues, but vices. Bipartisan cooperation becomes an oxymoron, like a Mormon distillery or Presbyterian laughter.”

When Americans fall into this partisanship, they resemble parents watching their 10-year-old playing soccer, always siding with the referees who make calls favorable of their child, Gerson said. This favoritism was manifested in Trump supporters’ response to the aerial photos of both Trump and President Barack Obama’s inaugural addresses. Even though the photos showed a larger crowd at Obama’s speech, Gerson said, Trump supporters still chose to believe the opposite.

And research shows when people are confronted with ideological discomfort, they experience physical discomfort as well, including “a sensation of alarm” and “feelings of nausea and anxiety,” Gerson said.

A confrontation of these negative tendencies is in order, Gerson said. We must be able “to make fair judgments on the penalty call no matter who benefits.” Instead of seeing the enemy, he said, we need a mirror.

“The destination of our divided politics, unless we turn aside, is dehumanization,” Gerson said. “There is life and death, the Scriptures say, in the power of the tongue. Words can provide permission for prejudice.”

Similarly, Trump’s reaction to the deaths and injuries at and surrounding the white nationalist “Unite the Right” march in Charlottesville, Virginia, was “rhetorical malpractice” of the first order. And the president’s categorization of refugees as animals, Mexican migrants as rapists and Muslim as threats just fuel the fire, Gerson said.

“If great words can heal and inspire, base words can corrupt,” he said.

Our word choice, Gerson said, is a “test of our anthropology,” and there are still instances where leaders pass the test. Words have the ability to “diminish, belittle or deceive,” but they also encourage and inspire.

“They can allow us, for a moment, to enter the experiences of others and widen, just a bit, the aperture of our understanding,” he said, “and our nation is in desperate need of that kind of leadership again.”

Therefore, as Americans become increasingly opinionated, Gerson said the nation should strive toward one virtue: empathy. A failure to empathize leads to a failure to imagine. As a result, people often isolate themselves and become lonely, Gerson said.

“Individualism has been a great force for liberation in Western history,” he said. “It is a great failure as a philosophy of life. The atomized individual is rootless and helpless and sometimes hostile, and there are signs of drift all around us.”

The destination of our divided politics, unless we turn aside, is dehumanization,” Gerson said. “There is life and death, the Scriptures say, in the power of the tongue. Words can provide permission for prejudice.”

In fact, Gerson said, the rates of serious depression are exponentially higher than the rates two generations ago. Therefore, “loving our neighbor” has become more important than ever before.

“We need a journalism like Jim practices that vividly describes worlds that are not our own and invites us to enter them in positive ways,” Gerson said. “We need a politics that calls us to the common good, not the triumph of our tribe. We need religious leaders who will emphasize the imago dei, not the controversy of the day.”

If people have the traits of compassion and generosity, the “thick walls of contempt” will be broken down.

“There is the power of the kind word, the unexpected favor, the genuine compliment,” Gerson said. “This is the strange alchemy of empathy. We serve our principles best by loving people even more than our principles.”

The “redeeming value” of this seemingly impossible love, he said, is that “viruses create their own antibodies.” The nation’s divisive illness will eventually, then, be cured.

“We know that the heroes of America are heroes of unity, not division,” Gerson said. “Lincoln still inspires us because he could somehow purge hatred from his heart. Martin Luther King still leads us because he displayed the strength to love. These figures admitted no exceptions to our founding commitments. The American ideal is eroded when it is restricted, it is lost when it is hoarded, it is honored when it is shared.”

At this final statement, Fallows chimed in.

He was curious as to whether the voice coming from the nation’s elected commander-in-chief can be produced elsewhere, particularly by someone in a position of lesser political power.

“Do we just assume there’s going to be no such voice from the public, or what can we expect?” he asked. “What can other people do to send this kind of message?”

Gerson said Trump’s failure to speak for America as a whole about Charlottesville occurred because he spoke for himself instead. Americans need to “stand for something better and more transcendent.”

Simply put, it hasn’t been easy, Gerson responded. In conversations with his Republican friends who support Trump, he has worked hard not to question their motives. According to Gerson, the “anger and resentment that helped elect Donald Trump” does have some backing, in that  millions of Americans feel “left behind” by the economy.

Even pre-Trump, though, Gerson said, Republican politicians have been struggling with speaking to the needs of the party. This dissonance has led to comments by fellow Republicans addressing Gerson, including the following:

“ ‘You’re betraying the team,’ ” he quoted. “ ‘We’re in a battle. You have to support the general. You can’t give any comfort to the other side.’ ”

As a writer, Gerson said, he can’t think that way. This led Fallows to mention he and Gerson’s connection: Both were presidential speechwriters. With his rhetoric, Fallows asked, how did Trump win evangelicals over?

According to Gerson, the appeal was to the people of faith who felt “thrown down from cultural heights,” with a chip on their shoulder — and Trump “took advantage of that historical chip.”

“He also managed to use apocalyptic language that fit their worldview,” Gerson said. “He often talked about America going to hell or on the verge of an abyss. That fit the pessimism of a lot of evangelical rhetoric.”

Moreover, he said Trump enticed evangelicals because he treated them like an interest group, claiming to be in alignment with their values, proposing ideas like the repeal of the Johnson Amendment, which prohibits religious organizations from making political endorsements.

“All of these things are understandable from a political perspective,” Gerson said, “it’s just that they have nothing to do with the Christian gospel, where the goal is to defend human dignity and to seek the common good. There’s a deep problem here when you take a faith that I value very deeply and … publicly tie it and identify it to a philosophy of exclusion.”

Fallows jumped back in with a mention of his four-year travels with his wife, Deborah, across small-town America.

“If you ask people about national politics, you’ll get this horrible, polarized, no-middle-ground dystopia you’ve been describing,” Fallows said. “If you don’t ask them about that — if you don’t ask about Hillary or Trump or Ted Cruz or whatever — you’ll find people still able to deal in very compatible and practical-minded ways.”

In the Fallowses’ experience, the areas with the heaviest proportion of immigrants and refugees are doing the best overall.

“What is your brief response to that hypothesis that locally, America is not riven in the way you’re convincingly saying it is nationally?” Fallows asked.

“Even people that are polarized in their own communities (are) often better than their own rhetoric,” Gerson said, “and that’s a source of hope.”