Professor Norman Wirzba examines food as gift, rather than commodity 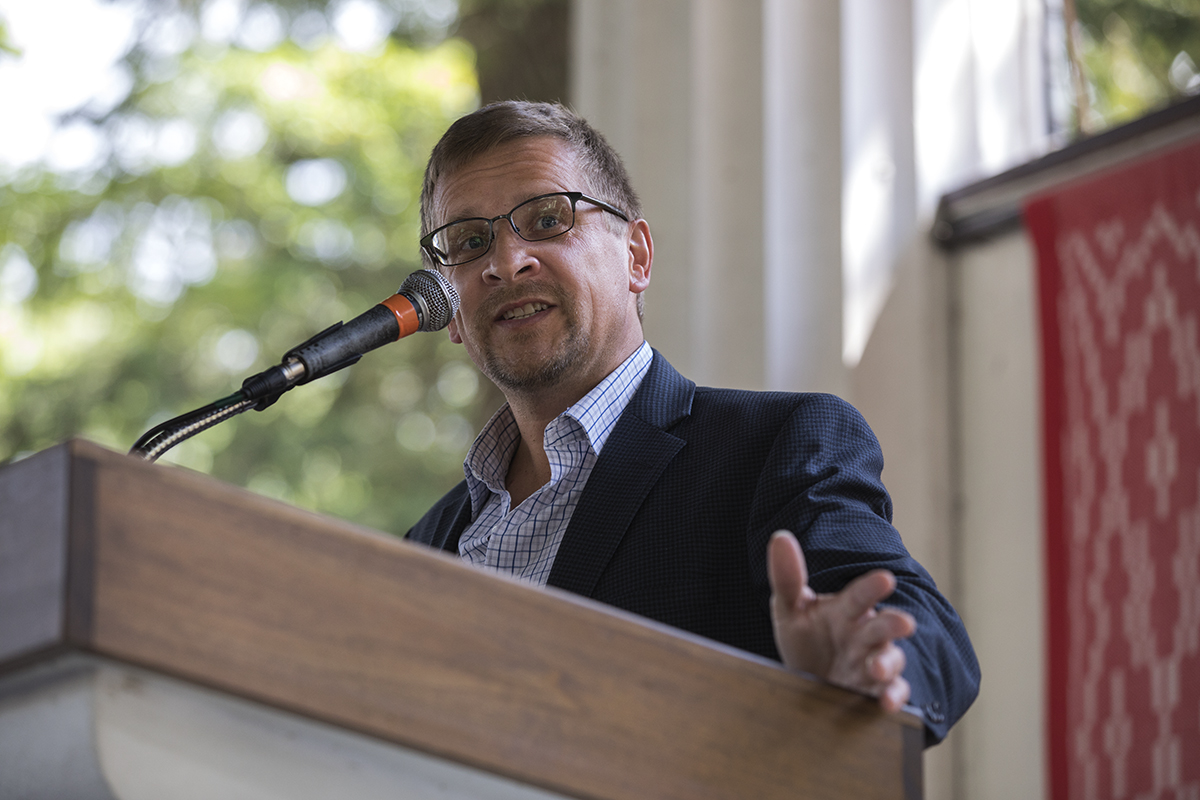 Norman Wirzba, professor of theology and ecology at Duke University, delivers his speech on "A Spirituality of Eating" on Monday, Aug. 21, 2017 in Hall of Philosophy. PAULA OSPINA / STAFF PHOTOGRAPHER

When Norman Wirzba was preparing for his Interfaith Lecture, he read over the Department of Religion’s instructions. He noted he would be speaking in the Hall of Philosophy, an open-air pavilion, and was advised he might be competing with birds or squirrels for attention.

But when Wirzba, professor of theology and ecology at Duke Divinity School, agreed to lecture, he had no idea he would be competing with a solar eclipse.

Wirzba’s Monday talk, “A Spirituality of Eating,” was the first in Week Nine’s Interfaith Lecture Series, “Food and Faith,” and occurred during the solar eclipse’s regional peak.

His speech’s purpose was to inform audience members about food — something that touches every aspect of life, he said. But this relationship with food has been on the decline since 2000, Wirzba said, when studies found more people were living in cities than on “their own land.”

“Our relationship to food is brokered through a credit card or cash because we have been reduced to the shoppers of food rather than being the growers of food,” Wirzba said.

In the present day, one only has to find a grocery store if they crave a particular kind of food, and Wirzba can’t think of a time he saw an empty supermarket.

But this convenience shouldn’t be taken for granted, as the Earth is approaching a population of 10 to 11 billion in the coming decades, and soon enough, there might not be enough to go around.

“Eating is a holy mystery,” Wirzba said. “Because for you to eat, others have to die.”

Food has a direct relationship to the economy and also to the body. The process of digestion is a “gathering of millions of microbiomes”; in fact, Wirzba compared the body to a zoo. But instead of recognizing the complexity of the body, Americans search for three characteristics in their food — cost, convenience and taste.

“(Food producers) now have spent millions and millions of dollars getting the precise salt and sweetness and emollient factor in that food, so that it doesn’t just feel good in your mouth, but it tastes good and it has the right crunch factor,” Wirzba said.

This commodification has indeed stripped food of its “aura,” he said, its history and context. The lack of imagination when thinking about food’s properties “prevents us from seeing the depth, the complexity, the mystery, the vulnerability, the fragility, the beauty (and) the surprise of food.”

The same goes for soil, Wirzba said. American novelist Wendell Berry once said soil is “the healer and restorer and resurrector,” and this reminded Wirzba of the Book of Genesis, when God creates Adam, the first human being, out of adamah, meaning ground or earth.

“We shouldn’t be surprised that when coming into the Garden of Eden for the first time, we would find God on God’s knees, hands in the dirt, kissing into that soil that breath that animates you and me, the plants and the animals,” Wirzba said. “Soil is astounding.”

Eating is a holy mystery,” Wirzba said. “Because for you to eat, others have to die.”

In the same vein, he said, plants that are healthy create “the most intense and diverse conversation ever.” This is partly due to the classification people give plants — if something is referred to as a flower, it is likely to get more attention than something referred to as a weed.

But when something is seen as not worthy of attention, it is more likely to be viewed as a commodity, and therefore can be killed, like a weed. Wirzba suggested a different perspective: seeing food as a gift instead. The reflex when picking up a commodity is to grasp it; that is not the case with a gift.

“When you receive a gift, you’re acknowledging how much you appreciate the gift giver, and you recognize that the gift giver did not need to give this to you, but they did as an expression of their love,” Wirzba said.

After listening to French chef Jacques Pépin’s morning lecture, Wirzba said he was struck by one particular statement of Pépin’s — despite all of the top-tier restaurants he has been to, he always remembers what was made in his mother’s kitchen as some of his favorite food.

“When Pépin takes a bite there, he is not just tasting exquisite cuisine, but he is tasting the love that is expressed by his mother, and I can’t imagine a more intense love than the love of a mother for her child,” Wirzba said.

He suggested that food is best prepared as an act of hospitality. If guests at a dinner party were to pull out their checkbook at the end of the night, Wirzba said, the host would be horrified.

“Food in a context like that is not for purchase because it’s the expression of love freely given,” he said.

This perspective, Wirzba said, can answer some theologians’ questions about why God made the Earth. Despite God’s perfection, the Earth wouldn’t be valuable if he had no one to share it with.

“God is perpetually welcoming life into the presence of God, and then nurturing that life so it can live into the fullness of all that is possible for it,” Wirzba said.

This can be seen in the biblical books of the prophets, where they denounce cultures and societies in which people go poor and hungry. In the New Testament, this theme continues.

“What does Jesus do?” Wirzba asked. “He heals, he reconciles and he feeds people.”

Food, he said, is “God’s love made nutritious” — or, to take it even further, “God’s love made delectable.” Wirzba believes God made people to be healthy and whole, but he understands this mindset can come off as “mushy.”

“The key is for us to make ourselves worthy of the life and death of others by making ourselves gifts of love to others in return,” Wirzba said. “In other words, we receive the love of God in food by learning to love the world, and God, in return.”

He recalled his grandfather as someone who loved the world. His grandfather owned chickens, and every afternoon, he would cut down grass, bring it to their coop and throw it down for them to eat. The chickens would “jump in pure delight, gobbling it up.” This attitude, Wirzba said, was the proper one — acknowledging our food as a gift to love, cherish and eat.

“We are called to take up a fundamentally different attitude, a different posture in the world: a posture that is marked by some very, very important traits we can exhibit,” Wirzba said.

And of the these traits, one was particularly important to him: the practice of saying grace. “Amen,” as a matter of fact, means “let it be so.” It acts as an acknowledgement; rather than “grasping and hoarding,” one is “receiving and sharing.” So, Wirzba suggested, before digging in, “oil, water, plants, gardeners, farmers, chefs and cooks” should be acknowledged.