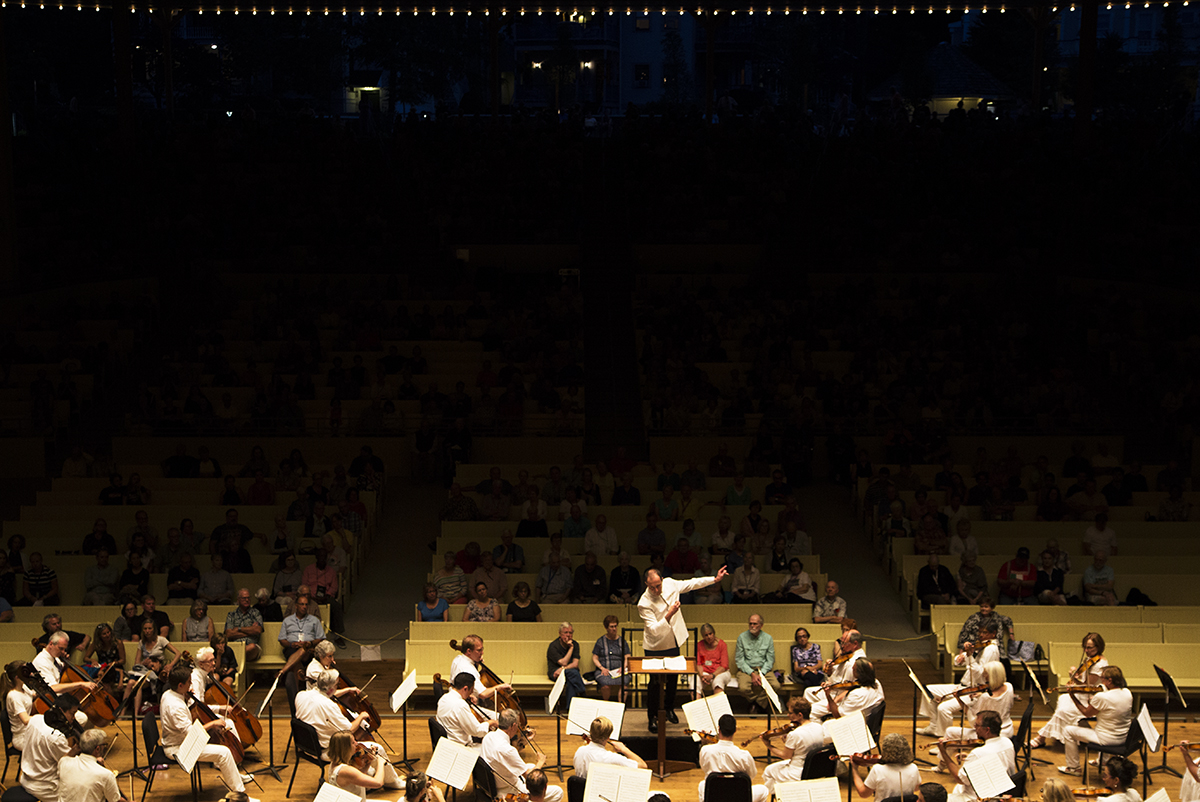 The Chautauqua Symphony Orchestra, under the baton of Music Director Rossen Milanov, performs Mahler’s Fifth Aug. 3 in the Amphitheater.

Steven Mackey considers himself a kind of musical mutt.

Mackey grew up playing electric guitar. He admired Jimi Hendrix, Ravi Shankar and Led Zeppelin. In his late teens, he had his first encounter with classical music. At the time, classical music was going through what Mackey described as a purist phase.

“Right after World War II, classical music kind of clamped down for a variety of sociopolitical reasons,” Mackey said. “It became this kind of solipsistic field.”

Generally speaking, classical music became increasingly self-referential and hermetic. Popular influences were shunned in favor of systems and procedures. The prevailing artistic vogue had a lasting effect and left aspiring composers like Mackey, who felt concert music could legitimately incorporate vernacular influences, at a loss.

At 8:15 p.m. Thursday in the Amphitheater, the Chautauqua Symphony Orchestra will be led by Music Director Rossen Milanov in a performance of Mackey’s double concerto for violin and electric guitar, “Four Iconoclastic Episodes.”

What makes each of the movements “iconoclastic,” according to Mackey, is the influence of various nonclassical types of music, from Indian ragas to blues and rock.

“On the one hand, we grew up with rock music and records and access to music from all over the world,” Mackey said. “But on the other hand, there was sort of this post-Darmstadt kind of mentality that classical (music) is supposed to be purebred.”

The Darmstadt School was a group of composers, headed by the likes of Pierre Boulez and Karlheinz Stockhausen, who earned a reputation as the strictest and most extreme practitioners of serial music. (Armenian-American composer Loris Chobanian frequently referred to the group as “the Darmstadt Bastards.”)

“When I was in the early part of my career I got a lot of pushback, which always puzzled me,” Mackey said. “The whole reason I got out of the rock music world and into the classical world was because it seemed to me that one aspect of concert music was its omnivorousness.”

Mackey cited Mozart as an example, noting the composer’s use of everything from Austrian folk songs and Turkish military music to Italian bel canto as source material. Handel was known for synthesizing and even parodying styles from all over Europe as a result of his extensive travels.

Composer John Harbison, who is an institute professor in the music department at the Massachusetts Institute of Technology and is known to be equally at home in jazz and atonal music, gave a young Mackey some valuable advice.

“He said several times that you never escape the music you were passionate about when you were 17 years old,” Mackey said.

Eventually, Mackey concluded that classical music is indeed a perpetually expanding and evolving amalgam of influences, not a set of rules laid down by a handful of European postwar despots. As an established composer and teacher, Mackey now lists world music and sacred Renaissance music as influences. And the music from Mackey’s early years still comes across in the double concerto.

“The first movement is explicitly influenced by fusion rock from the ’70s,” Mackey said. “The guitar plays these long lines, bending and a lot of things that I think are Ravi Shankar-influenced.”

The concerto’s third movement incorporates elements of Indian music. Mackey said the beat cycles of traditional tabla drumming are conceptually similar to the repeated harmonic pattern of a chaconne or passacaglia in Western music.

There are plenty of double concertos in the concert repertoire dating back to the Baroque period, but Mackey didn’t look to any of them for guidance.

“I just did what came naturally,” Mackey said.

Mackey doubts the traditional examples would have been much help anyway.

“The baggage is different in the two instruments, the electric guitar and the violin,” Mackey said. “There aren’t any models with such vastly different-seeming instruments.”

The idea for the concerto came from violinist Anthony Marwood, who will perform the solo violin part alongside Mackey at Thursday’s concert. Mackey and Marwood met at Yellow Barn, an annual summer chamber music festival held in rural Vermont, where they were both artists in residence. The pair was rehearsing Mackey’s “Physical Property” for string quartet and electric guitar when Marwood commented on the sound of the piece.

“After one rehearsal he said, ‘Man, I just think the sound of electric guitar and violin is really cool,’ ” Mackey said.

Marwood suggested that Mackey compose a concerto featuring the two instruments, backed up by a string orchestra instead of a quartet.

“That statement just gave me confidence and I didn’t look to any models,” Mackey said. “I just tried to keep our personalities in mind.”

Mackey will perform the solo electric guitar part himself.

“There’s no performer I know better than myself,” Mackey said.

He said knowing his own strengths and weaknesses can sometimes tempt him to stay within his comfort zone. That’s why Mackey feels he writes at least as well, if not better, for violin.

Mackey described Marwood as a fairly traditional violin soloist. In fact, Mackey prefers working with classical musicians precisely because of their fastidiousness and rigorous training.

“That kind of commitment, trying to make it their own, they have that same sort of care for every phrase in my piece,” Mackey said. “He’s trying to find out the best sound for this phrase of music, just as he would do for a late Beethoven string quartet.”

In Thursday’s concert, Mackey’s concerto will be sandwiched between Franz Joseph Haydn’s Symphony No. 101 in D major and Mozart’s Symphony No. 41 in C major. Fortunately, Mackey enjoys being programmed alongside dead composers.

“It’s not like I want to eliminate the competition or anything,” Mackey said. “I just like to hear my music in the context of timeless music.”

At 61 years old, Mackey still likes to check his own work against music that has survived centuries.

“How does my music stack up?” Mackey said. “Do I sound like a gum-chewing teenager?”