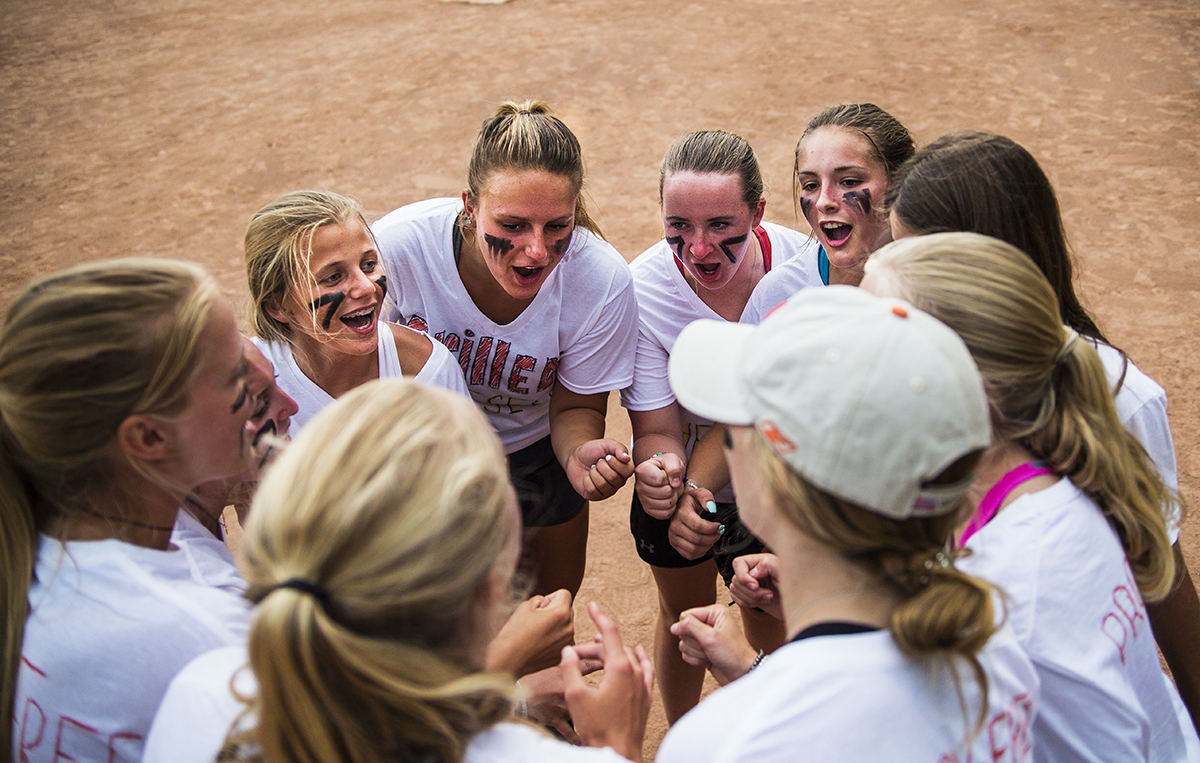 The Grilled Cheeselers have a group huddle during the sixth inning of the Women’s Softball Championship at Sharpe Field on Thursday, August 3, 2017. ERIN CLARK / STAFF PHOTOGRAPHER

The Grilled Cheeselers have been here before.

Last year, as the Misfits, they lost off a walk-off single to the Hot Chauts 16-15.

This year, they didn’t even let the Hot Chauts score 10 runs.

In an Aug. 3 title rematch, the Grilled Cheeselers halted the Hot Chauts’ bid for back-to-back titles, 14-6, at Sharpe Field.

Before the game, the Grilled Cheeselers psyched themselves up by putting on eye black and sporting their new team shirts.

The Hot Chauts worked on batting technique with a few of their players and went over their game strategy.

Cold wind started to blow through the field as both teams tried to adjust.

Both teams started off hot, each scoring two runs to make it 2-2.

However, a scoreless second inning cooled down both team’s bats.

To bring the energy back up, men’s softball commissioner Mark Altschuler had a surprise.

Stout, who plays for Altschuler’s softball team the Arthritics, performed Ernest Thayer’s “Casey at the Bat” for everyone in attendance.

While initially the audience was confused about what was going on, Stout received praise for the fun and quirky performance.

“At first, people were probably like, ‘What is this guy doing?’ ” Stout said. “It was a little weird, but I’m used to that.”

The break in the action may have been just what the Grilled Cheeselers needed.

In the third, their bats started to come alive, scoring three runs. The Hot Chauts answered back with two runs, making it 5-4.

In the fourth inning, the Grilled Cheeselers extended their lead by three runs, while the Hot Chauts narrowed the gap with two more runs off errors, making it 8-6.

This would be the last time the Hot Chauts scored in the game.

Six runs in the fifth inning helped the Grilled Cheeselers pull away, but it was their defense that kept the Hot Chauts at bay.

Team captain Julia Koron said the team felt a shift in momentum, which helped them put the game out of reach.

“We just started to relax and hit the ball,” Koron said. “We cleaned up the errors and completely focused.”

In the sixth inning, the Hot Chauts loaded the bases. However, with two outs, a flyout by the Hot Chauts killed their best chance to lessen the deficit.

In the bottom of the seventh, Koron and company realized they were actually going to pull off the win against the reigning, defending champions.

“I’m speechless,” Tarr said. “I’m glad we came back to try and defend. They played well. They deserve it.”

After the game, the Grilled Cheeselers celebrated by doing cart wheels on the field and hugging their teammates.

Their energy spilled out onto the field with screams of “We did it” and dancing celebrations.

After taking a breather, Koron said she and her team had a goal for next summer.

“We’re coming back next year to defend our title,” Koron said. “Grilled Cheeselers are going back-to-back.”