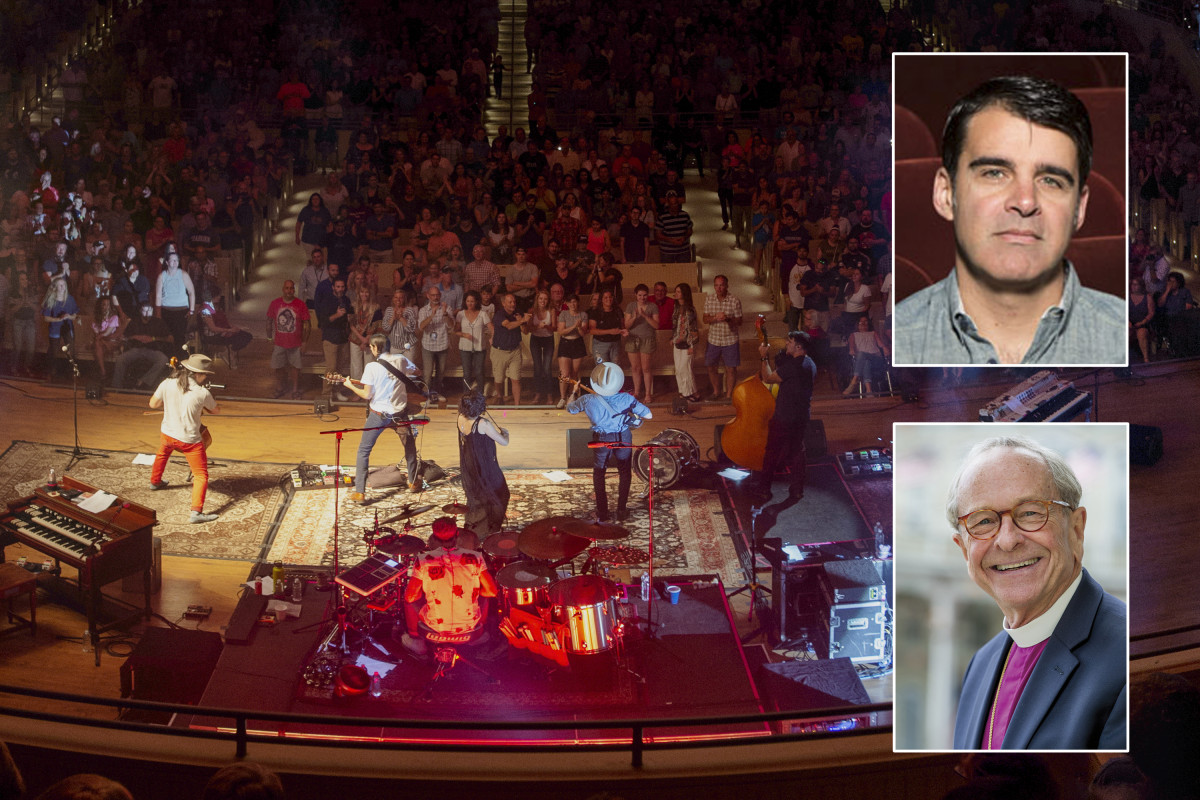 The Avett Brothers’ 2012 song “Live and Die” begins with the lyrics, “All it’ll take is just one moment and / you can say goodbye to how we had it planned.”

The band’s upright bass player Bob Crawford is credited as a songwriter on “Live and Die,” off the Avett Brothers’ album The Carpenter, and Gene Robinson has a feeling he knows the exact moment that changed Crawford’s plans forever.

“His whole life changed at that moment,” Robinson said. “(I’m curious about) how it changed his perception of God, his relationship with God, and what it’s like to be in the public eye and go through something like that when many people in the world are watching and listening.”

Robinson and Crawford will interview each other in a live Skype conversation at 2 p.m. EDT Wednesday, July 22, on the CHQ Assembly Video Platform. It’s a departure from the Week Four Interfaith Lecture Series theme, but the program, titled “Faith on Stage,” has been long in the works. With the thrice Grammy-nominated band originally set to perform July 22, 2020, on the Amphitheater stage, Robinson and Vice President of Performing and Visual Arts Deborah Sunya Moore worked together to bring band members on the 2 p.m. platform as well, to be interviewed about their faith journeys for Crawford’s podcast, “The Road to Now.” With COVID-19 postponing the Avetts’ third Amp performance to Aug. 4, 2021, Robinson and Crawford moved forward with the 2020 program that they could.

“The Road to Now” podcast, co-hosted by Ben Sawyer, brings together “historians, politicians, journalists and artists to the table for conversations that illuminate the map that brought us to where we are today.” An offshoot called “RTN Theology” focuses on faith, art, religion, and theology. But one word sticks out for Robinson in the podcast’s name, a word he thinks relates back to those opening lines of “Live and Die” — “now.”

“The name of the podcast speaks to this, that the only moment you can be sure of is now,” Robinson said. “(Those lyrics are) what happened to him with that experience. You can say that about so many things, that change everything. It struck me as a life lesson that we have these plans and we pretend that they’re all going to happen until they don’t.”

Crawford took time off from the Avett Brothers’ 2011 tour to be with his family while his daughter underwent chemotherapy; while Robinson will ask for an update on Hallie in their conversation, in 2017, the Sun Sentinel reported she had been in remission since 2013.

“It’s my impression that we come closer to God and our relationship with God deepens almost completely when we are at our wits’ end,” Robinson said. “Being in an extreme situation, we are more able to apprehend God. I’m looking forward to asking Bob his perspective on that.”

Crawford has spoken with several media outlets about how his family’s experiences have deepened his faith, and impacted his work. The band’s 2017 album True Sadness is an indication, written as band members were dealing with death, divorce, and illness.

“My daughter lost the right side of her brain. She’s severely disabled. It’s never going to be OK. My wife and I are constantly working through it,” Crawford told the Sun Sentinel. “But she’s such a joy to be around, you know? So I think that true sadness is where we walk through life, feeling the sweetness of joy. We experience that while also suffering a little bit, feeling the pain and fragility of life.”

To put that pain and fragility into a song, Robinson said, while living in the public eye, is admirable.

“My own experience is that there’s the public Gene and the private Gene, and yet my public face is a face related to religion,” said Robinson, the first openly gay bishop in the history of Christendom — his appointment to lead the Episcopal Diocese of New Hampshire was met with controversy and death threats, ultimately resulting in his being put under FBI protection in the days leading up to his consecration in 2003. “I think for any public person, you just have to preserve (yourself), and not lose track of who you actually are. And one of the things I admire about Bob in particular, and the Avett Brothers in general, is that they take that really personal stuff and put it into their music. It’s one thing to have someone in Nashville write a great song and then you record it; it’s another thing to not only write your own, but to have it come out of your own lives.”

In an interview with the Sioux City Journal, Crawford said he was “comfortable where life is, for all the tragedy and upheaval.”

“This life we live, I don’t know how you can handle it without God,” he said. “We’re all kind of over our heads.”