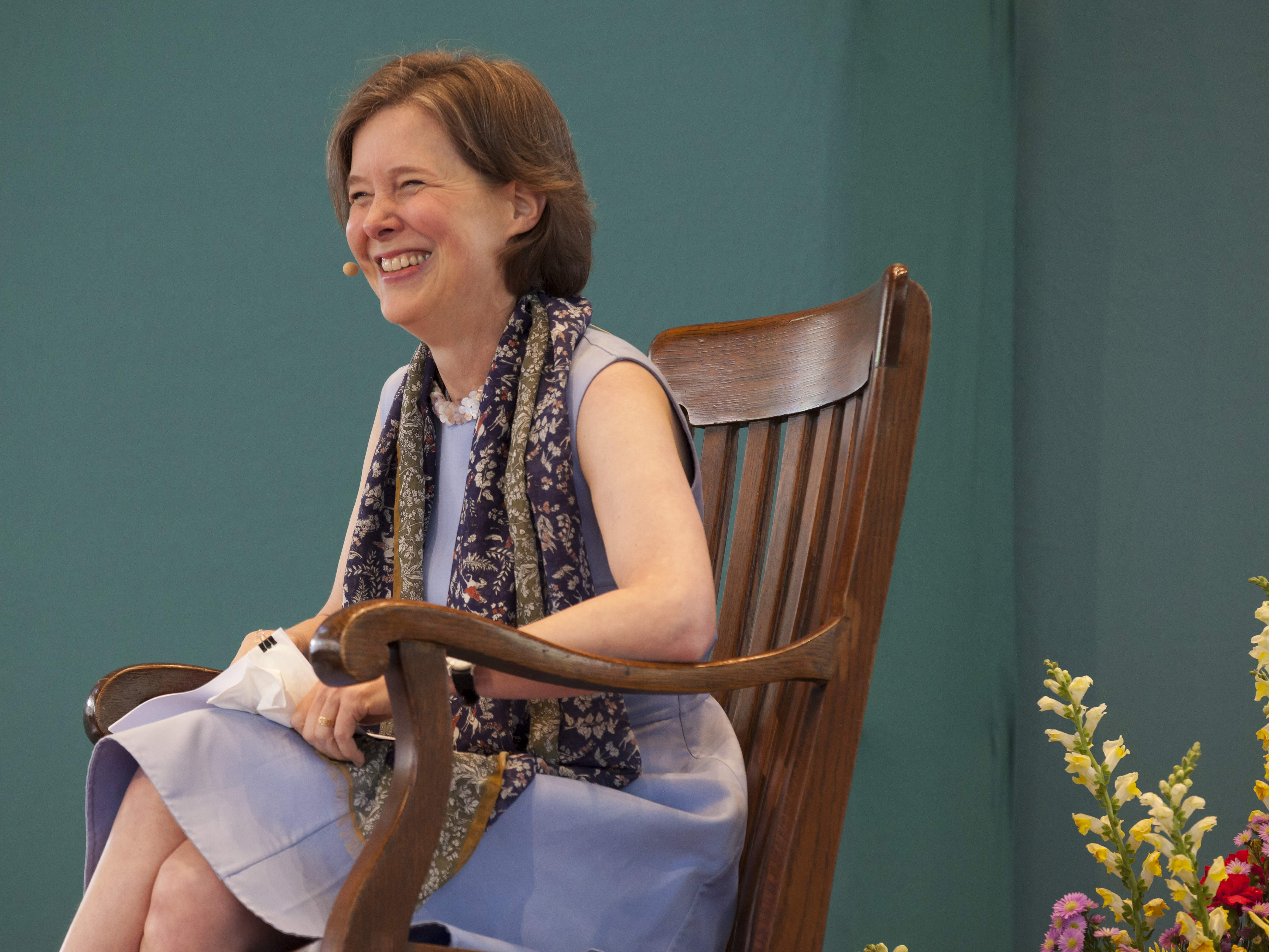 For Ann Patchett, writing is a linear process. The hardest part is finding the beginning line, but once she finds her beginning, the rest of the story flows onto the page.

Patchett joined author Roger Rosenblatt in a continuation of the weeklong conversation about creative expression during the Thursday morning lecture in the Amphitheater. Patchett discussed her writing process and what it is like to own an independent bookstore.

Rosenblatt asked Patchett about her inspirations when writing novels. Patchett, however, said writing needs to be more than just inspiration.

Patchett said she no longer waits for inspiration to strike, and she spoke critically of creativity and “the muse.” In her mind, it is all about going to work and seeing what happens.

“I think if I sit around waiting around for someone to whisper in my ears, I would get a lot of knitting done,” she said, after referencing an old story she heard about a Buddhist who meditated for 40 years in front of a wall before finding inspiration.

When writing a novel, Patchett develops the characters first. She talked about her 1997 novel The Magician’s Assistant.

Patchett wanted two characters who were in a primary and secondary relationship where the secondary character would need to do the job of the primary. She decided on a magician and his assistant because “it’s sort of sexy.” She imagined the magician in a tuxedo and the assistant in a sequined dress.

“I was halfway through that book when I realized I knew nothing about magic, and then I stopped, and I did a bunch of research into magic,” Patchett said. “What I discovered was that I hated magic. I was writing a book about magic, and I had never thought about it beyond how [the characters] would look on stage.”

In the book, the magician Parsifal dies in the first sentence, and Sabine investigates Parsifal’s past and finds his family is alive and well — though Parsifal claimed to have lost them in a tragic accident.

That introduces an aspect Patchett intertwines into all of her novels: creating a problem and learning how to solve it. In The Magician’s Assistant, the problem is the main character dies in the first line of the story. In Bel Canto, language barriers create a problem because none of the characters speak the same language.

“In every book there’s something I do only for myself,” Patchett said.

She also touched on her obsession with the length of time that passes in her novels. For example, her book Run takes place over the course of 24 hours. Her newest book, Commonwealth, which will be released Sept. 13, takes place over 52 years.

Patchett also disclosed how she got the idea for her book The Magician’s Assistant, which Rosenblatt said was one of his favorite novels of hers.

Patchett developed the idea during her first year at Radcliffe College while working on a nonfiction novel about the Los Angeles Police Department. Patchett wanted to apply for Guggenheim Fellowship to receive funding for the book but was unable to pitch the story because she had never written a nonfiction story before.

In a matter of 12 minutes, Patchett developed a false proposal for the fellowship and received $30,000 for the idea. While waiting for the response from the Guggenheim Fellowship, the Los Angeles Police Department story fell through, so Patchett pursued her false proposal, which became The Magician’s Assistant.

Patchett discussed how her book This Is the Story of a Happy Marriage came to light as well. At the age of 24, Patchett’s first marriage ended after a year. Because of her first, unhappy marriage, Patchett was reluctant to marry again and dated her current husband for 11 years before agreeing to marry him.

“The moment of real commitment for me came when I bought a house down the street from him,” Patchett said. “I got to a point where I definitely said, ‘I’ll be with you until one of us dies.’ ”

She did agree to marry her husband, however, when he became very ill. She knew, as his girlfriend, she could not make big decisions if his illness would take a turn for the worse.

“Six weeks later he was totally fine,” Patchett said. “And then I was married and didn’t have a house anymore, and it really was short of a miracle because I don’t know if we would have ever gotten married if it wasn’t for that.”

After the discussion, a member of the audience asked Patchett what she thinks of e-books as a bookstore owner.

Patchett responded that she has no issues with e-books except when individuals only read using e-books, but continue to use the resources of independent bookstores, such as bringing their children to story hour.

Another audience member asked about adult coloring books and why adults are beginning to read more young adult novels designed for teenagers.

Patchett said the movement of adults reading young adult novels began with The Lovely Bones by Alice Sebold and was further reinforced by the rising popularity of the Harry Potter series.

“Maybe on their way to the coloring book section they might notice that we have books with words,” Patchett said. “I don’t care what you’re reading. I care that you’re reading. At least they’re reading, and chances are that they will then later have an experience with a good book.”