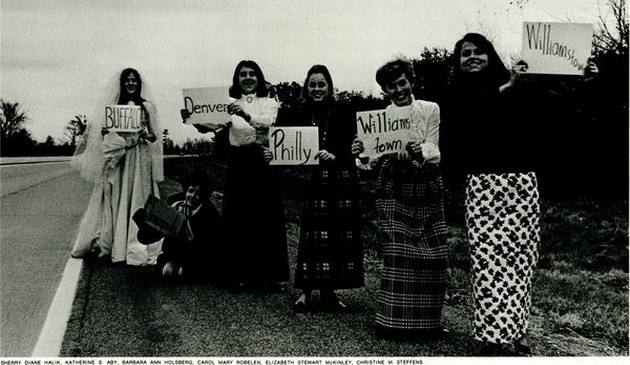 When Liz Roman Gallese graduated from Skidmore College in 1969, she and her classmates were living amidst an American paradigm shift.

“We had come of age at a time when all the rules changed in the short span of our four years of school,” she said. “Instead of a cookie-cutter life that we were advised to have when we entered, by the time we left, the future was open to us to design whatever type of life we wanted.”

That change is chronicled in the documentary “Women of ’69, Unboxed,” for which Gallese is an executive producer and her fellow alumna Jane Startz is a producer. At 3 p.m. Thursday in the Chautauqua Cinema, Gallese will host a screening and subsequent discussion.

The foundation of the film is the Skidmore College Class of 1969 “Year Box.” Instead of a typical yearbook, the students assembled a collection of unconventional portraits and placed them loose-leafed in a box. In one image, a woman proudly straddles a motorcycle. In another, her classmate stands in a windswept gown under a cloud-spotted sky.

More than 45 years later, several of those women sat in front of the camera again to share their stories in “Unboxed.”

In the film, the women reflected on their time at Skidmore and spoke about their photographs. Many of them were in awe of the tumult through which they lived in the late 1960s, including the breakdown of traditional gender roles. One woman cried and said that she simply wanted to be free.

Gallese said that freedom was the underlying issue of the women’s movement.

“If you would want to live a life as a wife and mother in your home and you have the means to do so, you should have that freedom to do it, but it shouldn’t be societally imposed on you,” she said. “It should be something that you freely choose.”

Documentarian Peter Barton directed the film. He graduated from Dartmouth College in 1963 and went on to Yale University with the intention of becoming a playwright. That November, President John F. Kennedy was assassinated.

“That convinced me that I couldn’t just be an artist,” he said. “I had to somehow become political and help change the world.”

After serving in the Peace Corps until 1968, Barton returned to the U.S. and turned his work toward activism, including opposition to the Vietnam War and widespread discrimination. In 1978 he founded Groundswell Inc. in order to “amplify the voices of the disadvantaged using cutting edge media.”

He was a collaborator on the 1971 documentary “Janie’s Janie,” which profiled the personal empowerment of working mother Jane Giese within the feminist movement of the early ’70s. The film was screened at the first Women’s International Film and Arts Festival and was recently archived as a historical document at the Museum of Modern Art.

Barton screened the film at the Brooklyn Academy a few years ago and was struck by the fact that many of the younger women in the audience said they did not relate to Giese’s struggles and felt the women’s movement had already achieved its goals.

That feedback was part of the reason Barton got involved with “Unboxed,” his most recent project.

“This movie has reached people in very visceral ways across the board,” he said. “It really has appealed to a lot of young people, and that’s very heartening to me.”

Another aspect of the women’s movement that millennial women might not be able to fully appreciate is the significance of former Secretary of State Hillary Clinton’s presumptive presidential nomination within the Democratic Party. Clinton is a member of the Wellesley College Class of 1969.

Gallese said Clinton’s success might seem ho-hum because of her longstanding presence in the public eye, but for frontline feminists from the ’60s, it’s a watershed moment.

“I could not begin to imagine such an occurrence happening when I graduated in 1969,” she said. “It was so far-fetched.”

For Gallese, sharing the stories of her former classmates in such a relevant year is particularly special.

“I’m thrilled that the women in our movie will be getting their voices heard and out at the same time that a woman from the class of 1969 at an all-women’s college might be president of the United States,” she said.