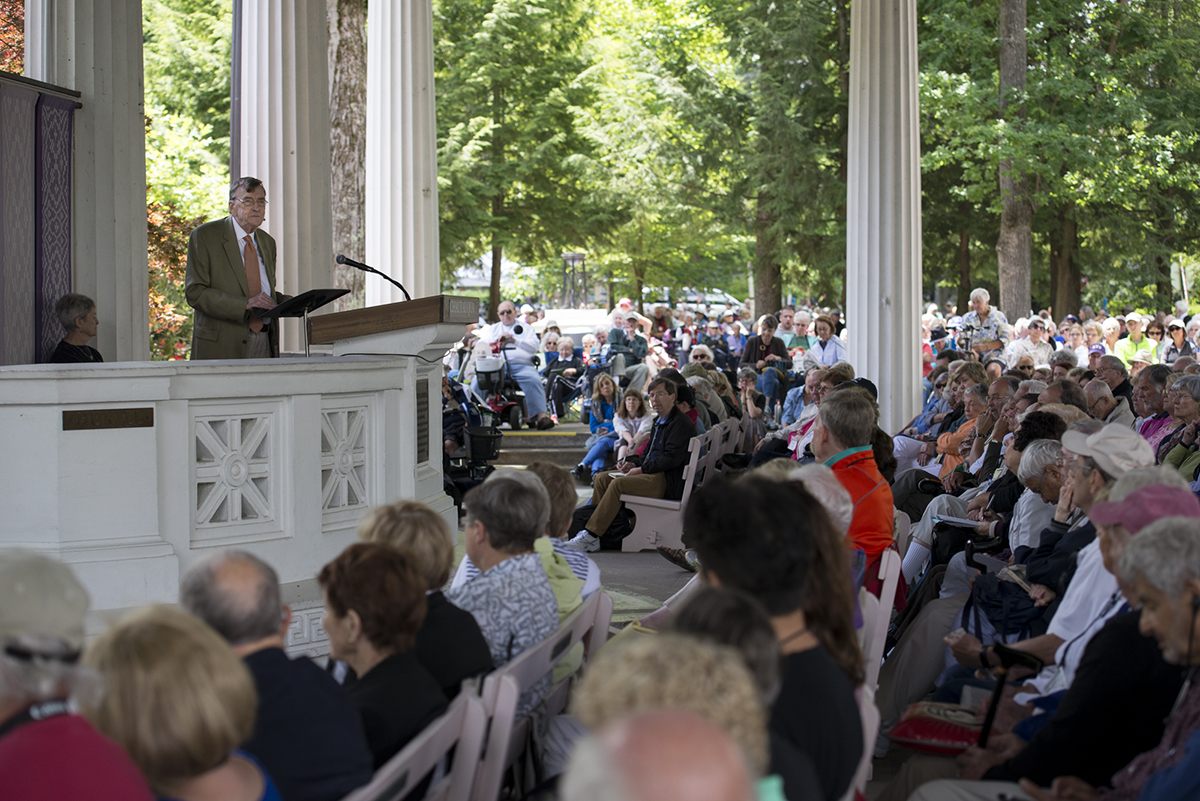 Having concluded on Monday the Virgin Mary was something less than a virgin, and on Tuesday eliminating Joseph from the Christian narrative altogether, John Shelby Spong turned his sights on the Messiah himself Wednesday afternoon in the Hall of Philosophy. Jesus never gave the Sermon on the Mount nor traveled in the desert for 40 days, Spong said. For that matter, he said, much of the baptism story and Herod’s order to kill the infant boys of Bethlehem are probably parable as well.

In his third Interfaith Lecture of the week, Spong, the retired bishop of Newark, expanded on his argument that the early Christian Bible was a Jewish book for a Jewish audience by connecting the two most revered figures of both faiths. Matthew, Spong argues, gave Jesus similar but slightly superior biographical details as Moses in an effort to prove to Jews that Jesus was truly holy.

“I want to trace the shadow of Moses throughout Matthew’s Gospel to make you understand that this Jewish writer was using Moses to tell the story of Jesus of Nazareth,” Spong said. “He’s not writing history. This is not eye-witness reporting. This is Jewish interpretive painting.”

The parallels begin when Jesus is scarcely an infant. King Herod, hearing the Magi announce that the next king of Israel has been born in Bethlehem, orders his soldiers to execute every young boy in the city. Jesus survives after an angel tells Joseph to flee with his family to Egypt.

The story bears striking resemblance to Moses’ birth story, Spong said. Pharaoh, fearing the Jews will grow numerous and fight against Egypt in a future war, orders each newborn Hebrew boy killed. Moses survives because his mother puts him on a raft in the Nile River, where Pharaoh’s daughter finds him.

Spong notes that Matthew takes several narrative leaps to preserve the parallel and they make little sense when viewed literally. Before Herod sends people to kill newborns, he has the Wise Men, who mistakenly first follow the star to Herod on their way to Jesus, send him information on the new king. Spong asks why Herod would enlist three random strangers for agents, or how a star could even point to a specific place for the men to follow.

“If you’re gentile and start reading Matthew’s Gospel and don’t know anything about the Jewish scriptures, the Jewish traditions, or the Jewish liturgical practices, you might try to literalize that story,” Spong said. “And when you do, it makes literal nonsense.”

Next is the Baptism of Jesus, Spong said, where John the Baptist dips Jesus in the water and the heavens open up and tells the crowd around them, “This is my beloved Son, in whom I am well pleased.” Spong connected that event to the Jewish tradition of God showing his presence in leaders by giving them power over water, most famously when Moses splits the Red Sea, but also when Joshua splits the Jordan and when Elisha did the same.

What does the Baptism of Jesus have to do with controlling water? In the creation story in Genesis, on the second day, God “divides the waters from the waters.” In other words there is water both at sea-level and in the heavens.

“Jesus splits the heavenly waters; all Moses can do is split the Red Sea,” Spong said. “Matthew is trying to exaggerate and magnify to try and make sense of the intensity of his experience.”

After his baptism, Jesus goes off to the wilderness for 40 days and, over that time, faces three temptations. Spong argued that those 40 days are meant to parallel the 40 years Moses and the Israelites spent wandering the desert while the temptations parallel the trials Moses faced.

The first temptation comes when Jesus resists turning stones to bread to overcome hunger. Spong said that mirrors the moment when Moses, needing food in the wilderness, prays to God to send manna from heaven. The second temptation comes when Satan tells Jesus to throw himself off the pinnacle of the temple in Jerusalem to test God and see if He will save Jesus. Spong said that parallels Moses striking a rock to test if God will give them water. The final temptation comes when Satan takes Jesus to the top of a mountain and offers him dominion over every kingdom on earth. That, Spong said, parallels when Moses is tempted to worship the Golden Calf.

“The three temptations in Matthew’s Gospel were identical,” Spong said. “The temptations were Moses stories re-written to be about Jesus of Nazareth because Moses was undergirding the entire Matthean narrative.”

Finally, Spong said that the Sermon on the Mount is meant to represent when Moses ascends Mount Sinai and returns with the Torah, only instead of receiving new laws, Jesus receives a new interpretation of the old law. The sermon itself, Spong said, closely resembles in form Psalm 78:19, a song that praises the glory of God’s law and was traditionally sung by Jews on Shavuot, the holiday commemorating Moses ascent to Sinai.

“Matthew is presenting Jesus as the new Moses,” Spong said. “Every Jewish reader of the Sermon on the Mount would know it.”

As he did in the first two lectures, Spong turned from exposition to exhortation as he finished his talk. He called for people to look past the literal stories of the Bible for a deeper message.

“Every life is love. That’s what the story of Jesus is all about,” Spong said. “We need to call people to the essence of that message, and if we can do that, anti-Semitism will die, calling Muslims infidels will die, treating women as second-class citizens, oppressing gays and lesbians … will die.”