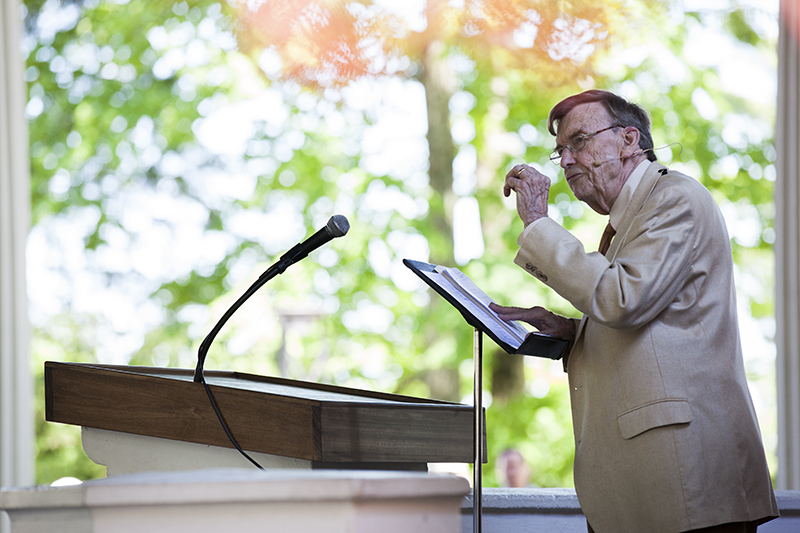 In the first five minutes of the 2016 season’s first Interfaith Lecture, John Shelby Spong declared that Jesus’s Virgin Birth is most likely fictional, and the question of whether it’s true or not is largely irrelevant.

Spong, the retired Episcopal bishop of Newark who’s been banned from churches across the world, gave his first of five speeches on “Biblical Literalism: A Gentile Heresy” on June 27 in the Hall of Philosophy. Spong’s central argument, based on his book of the same name, is that the early gospels are Jewish texts for a Jewish audience. As such, they need be read with knowledge of the Israelite history, and to be interpreted through the lens of Jewish Midrash, a method of storytelling that often exaggerates or entirely invents narratives to teach a lesson or illustrate a deeper truth.

“The Christian moment did not separate itself from the synagogue until about the year 88 C.E., which means the first two Gospels, Mark and Matthew, are Jewish books,” Spong said. “They are products of the synagogue, and if you did not read these books through a Jewish lens, you will not understand them.”

Monday’s lecture focused on the Book of Matthew and the story of Jesus’ ancestry. By establishing that the Messiah descended from four Biblical but disreputable women, the first 17 verses of the Gospel — “The most boring verses,” he said — contain a feminist message that God can make any human, even those in the most depraved circumstances, holy.

Spong’s ultimate goal is quixotic: fundamentally reinterpret the Bible to save a church that he believes young people are leaving in droves. Throughout his lecture, he drew rancorous applause and more than a few scowls from the overflow audience.

“We are having a massive exodus of organized church into the secular city,” Spong said. “My mother was a fundamentalist. I love my mother, but I don’t want my mother to let my church stand for pre-modern ignorance. I’m sure I will run out of [the] Christian church some fundamentals and anger the spirit in them, but that was never my intention. … My intention is to open the minds of their children and grandchildren, who see nothing about the Christian faith that appeals to them. I haven’t gotten time to worry about the sensitivities of all the fundamentalists; we are at a battle for the soul of the Christian movement.”

Spong’s prescription — to abandon fundamentalism — may be perceived to be heretical, but his diagnosis is unavoidable. American Christianity is hemorrhaging congregants. Between 2007 and 2014, the percentage of Americans who identify as “no religion” rose from 16 to 23 percent, according to a 2015 Pew Research Center study, a rise most pronounced among millennials. Over that time the number of mainline Protestants has fallen by approximately 5 million people, the study found.

To stem the flood, Spong said, Christianity needs to return to its Jewish roots. That return needs to start with the beginning of the Bible and what have become its most fundamental tenants, including the Virgin Birth, a part of the Jesus story that is not mentioned until Matthew’s Gospel, written nearly 90 years after Jesus was born.

Drawing from an early Biblical passage in which a Jew calls Jesus “son of Mary,” among other pieces of evidence, Spong posits that Matthew invented the Virgin Birth to respond to criticism that Jesus was a bastard. In the Jewish tradition, men were referred to by their father’s name. Calling him by his mother’s name implied he had no legitimate father, Spong said, so Matthew answered by claiming Jesus was the son of the God.

But Spong said the 17 verses delineating Jesus’ lineage that precede the first mention of a virgin birth actually show a deeper truth when viewed with knowledge of the Jewish scriptures, as its first readers would have had.

Among the nearly three dozen of Jesus’ ancestors mentioned by Matthew are four women, a rather unusual inclusion, Spong said, as ancient Israelite society generally only mentioned men when referring to a person’s pedigree. (Women were viewed as mere vessels to develop the man’s progeny.) Even more curious, Spong said, is that the four women are, to a degree, disreputable.

The first one is Tamar, the widow of Judah’s first two sons, who then dressed as a prostitute and slept with Judah, producing a child that was at the time regarded as the product of incest. The second, Rahab, was a prostitute from Jericho who hid Jewish spies in return for her assured safety once they captured the city. The third, Ruth, seduced the cousin of her deceased husband after the husband’s death left her and her mother-in-law destitute. King David commanded the fourth, Bathsheba, to come to his palace and then slept with her while her husband was off at war. When David learned she was pregnant and he must be the father, he had her husband put on the front lines so he would be killed.

The end message: Even incest, prostitution, seduction and adultery, and even women who are forced into such circumstance, can produce something, or someone, holy.

“Matthew is defending the holiness of Jesus on two fronts,” Spong said. “He’s asserting that this child is a holy child, this child is the child of God. But he says even if that didn’t turn out to be literally true, it doesn’t matter, for God can bring holiness out of every single distortion of human life.”

As the followers of Jesus transitioned from being almost exclusively Jewish to almost exclusively gentile around the first century of the Common Era, Spong said that this insight was lost. He called into question 1,900 years of Christian theology, arguing it was developed by gentiles who lacked the perspective of the Jewish audience for which much of the Bible was written.

Spong hopes that his new, revisionist, view of the Bible through what he believes is a proper Jewish, Midrashic lens, can keep and attract young people to Christianity in an age when many of the Bible’s literal events have been scientifically disproven.

“No longer do these Biblical stories make literal or logical sense, so people think they’ve got a choice only of choosing them literally or abandoning the Bible,” Spong said. “I want to try and offer people an alternative.”