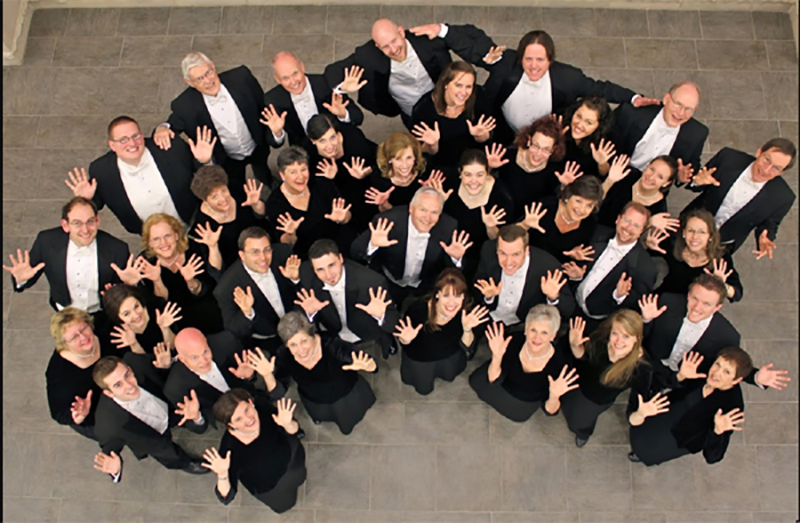 The Susquehanna Chorale first visited Chautauqua Institution in 2013, and when it takes the Amphitheater stage tonight, the group will perform a program directly tied to one of Chautauqua’s own.

The group will perform its concert, titled “Sing Me to Heaven,” at 8:15 p.m. tonight in the Amp.

One of the pieces featured in the program is the “Chautauqua Requiem,” a piece written by composer Bob Chilcott and inspired by Mary Anne Morefield’s poem “Requiem.” Morefield is a local author and familiar face among Chautauqua’s literary arts scene.

Linda Tedford, the founder, artistic director and conductor of the Chorale, said the “Chautauqua Requiem” is the common thread for the rest of the music selected for the concert.

Morefield’s poem was written over a fragmented period of time.

She said the first idea for the poem came to her while she was sitting in a church and listening to a requiem being performed. Inspired by the what she was hearing, she started writing her own words to the music on pew cards.

“I wasted a lot of pew cards, but I had all these little phrases,” Morefield said. “And I just put them away.”

Morefield later returned to the cards and began to craft a poem, which was eventually published in the Chautauqua literary journal and collected in her book, Earth, Grass, Trees and Stone. When her husband, John, died in 2012, she decided to read the poem at his memorial service.

She also reached out to the Susquehanna Chorale and asked if they would be willing to perform at the service. Morefield said she and John shared a love for the Chorale and “never missed a performance.”

After hearing Morefield read her poem at the service, Tedford told her it should be set to music. When the opportunity came up to commission the piece with Chilcott, he agreed to take on the project. The result was the “Chautauqua Requiem,” which premiered in May in Hershey, Pennsylvania.

Morefield said she thinks Chilcott’s composition matches the tone and message of her poem. The process of writing a poem inspired by music and having it turned back into music — essentially, the arts informing and inspiring one another — is what defines Chautauqua for her. Honoring her husband’s memory in that way is exciting, she said, because she knows he would love it.

“The whole thing is such a Chautauqua experience,” Morefield said.

Other works featured in the program include “i thank you God” by Elliot Z. Levine and “Twinkle, Twinkle Little Star” as arranged by Daniel Elder.

The program was arranged in order to look at different views of heaven, Tedford said.

“It’s the literal heavens, it’s heaven in a spiritual sense, it’s heaven in that you might say, ‘Wow, that was so beautiful — I thought I died and went to heaven,’ ” Tedford said. “It’s the beauty that’s all around us.”

The Chorale is made up of more than 30 members, who all have different vocations outside of their work with the group. Tedford said a lot of time is spent rehearsing and figuring out technical issues, but
they also like to work on making an emotional, communicative connection with their audience.

“Audiences have said that they really appreciate the fact that each Chorale member seems to be totally involved in what he or she is doing and seems to love what they are doing, which is absolutely true,” Tedford said.

Gwen Lehman, who serves as president of the Chorale as well as a performer, said those connections make her work with the group one of the most fulfilling aspects of her life.

“There is something about, at least for me, using all the parts of one’s self — the body, the intellect, the heart, the emotions — to produce and somehow communicate with another human being,” Lehman said.

Tedford said it’s an honor to be invited to be a part of the evening entertainment series, and Lehman agreed.

“We’re happy to be at Chautauqua on any night,” Lehman said.

Although the program centers around the idea of heaven, Tedford said one of her favorite parts about it is the message of hope
it shares.

“It’s not about death,” Tedford said. “It’s about savoring life, and savoring the beauty of life and the things around us, which resonates with me all the time.”

Lehman shared a similar sentiment, and said she hopes the audience at Chautauqua will feel the same after the performance.

“I hope that they will go home that night thinking how rich and wonderful
life on this earth really is,” she said.