Eight years later, Trudeau and his wife, television journalist Jane Pauley, are with Rosenblatt once more — this time opening the week of conversations.

Rosenblatt, Trudeau and Pauley will kick off this year’s morning lecture series at 10:45 a.m. today in the Amphitheater, opening a week titled “Roger Rosenblatt & Friends: On Creative Expression.”

“We think creativity is what makes us human,” said Sherra Babcock, vice president and Emily and Richard Smucker Chair for Education. “They are the creative expression of our generation; Jane is a thoughtful television presence, and Garry provided, and provides, insight through ‘Doonesbury.’ For those of us in our 60s, it provided the stories of our lives in a medium that was also part of our lives.”

“They are people we have grown up with,” Babcock said.

Both Trudeau and Pauley have spoken at Chautauqua before, in 2008, when Trudeau was on the morning platform and Pauley presented in the Chautauqua Women’s Club Contemporary Issues Forum. Both have spent decades in their respective fields. Trudeau is the creator of “Doonesbury,” which first appeared in 1970, and is the first comic strip artist to be awarded a Pulitzer Prize for editorial cartooning (he was a Pulitzer finalist three other times). In recognition of his work on wounded warriors, he has received
the President’s Award for Excellence in the Arts from Vietnam Veterans of America.

Pauley joined NBC’s “Today” in 1976, eventually co-anchoring with Tom Brokaw and his replacement, Bryant Gumbel. She is the author of the memoir Skywriting: A Life Out of the Blue, in which she documented her life and career, and opened up about her diagnosis of bipolar disorder.

“If I’m going to be famous, I want to be famous for things that are true,” Pauley told the Daily in 2008. “Perhaps with the intuition of a journalist, I sensed it was safe coming forward, that there has been a tipping point in societies’ acceptance and knowledge of mental illness.”

With that book, Babcock said, Pauley “has revealed more of herself in ways that have healed.”

Rosenblatt has been making speaking appearances at Chautauqua for more than 30 years; the memoirist, novelist, essayist, playwright and professor has written five off-Broadway plays and 17 books, five of which have been Chautauqua Literary and Scientific Circle selections. He’s been awarded a Fulbright Scholarship, Washingtonian Magazine’s award for the best columnist in Washington, the Robert F. Kennedy Book Prize, two George Polk Awards, a Peabody Award and an Emmy.

This is the fifth iteration of the “Rosenblatt and Friends” model at Chautauqua; every time, Rosenblatt jokes that he’s starting to run out of friends. But with Trudeau, who first met Rosenblatt 35 years ago, “it’s a friendship that is shared by the same values and the same laughter,” Rosenblatt said.

In today’s conversation, Rosenblatt said he hopes to learn about the way Trudeau and Pauley see the world differently.

“Jane interviews people on television in order to let them be themselves, and Garry looks at the world and he wants to correct it,” he said. “He doesn’t want people to just be themselves: he wants them to be better. And it’s a very interesting two-pronged way of looking at experience.” 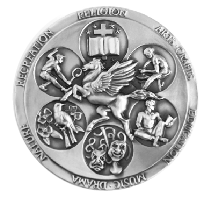 President Thomas M. Becker will present the author, memoirist, and professor. Roger Rosenblatt with the President’s Medal at the beginning of the 10:45 a.m. lecture presentation Monday in the Amphitheater.

H. Richard Duhme, first head of the School for Sculptors in Chautauqua, designed the Centennial Medal, as it was originally called, in 1974 to celebrate the Institution’s 100th anniversary. The St. Louis artist designed the piece with one side picturing a series of images representing religion, arts and crafts, music and drama, education, nature and recreation. The reverse side focused on a framed Miller Bell Tower beneath which the dates 1874 to 1974 were printed. This side of the medal was later revised to reflect a more open-themed time frame and renamed the President’s Medal.

The medal has been awarded sparingly to honor those who have reflected the Institution’s spirit and purpose and who give back to Chautauqua through their energies and resources.