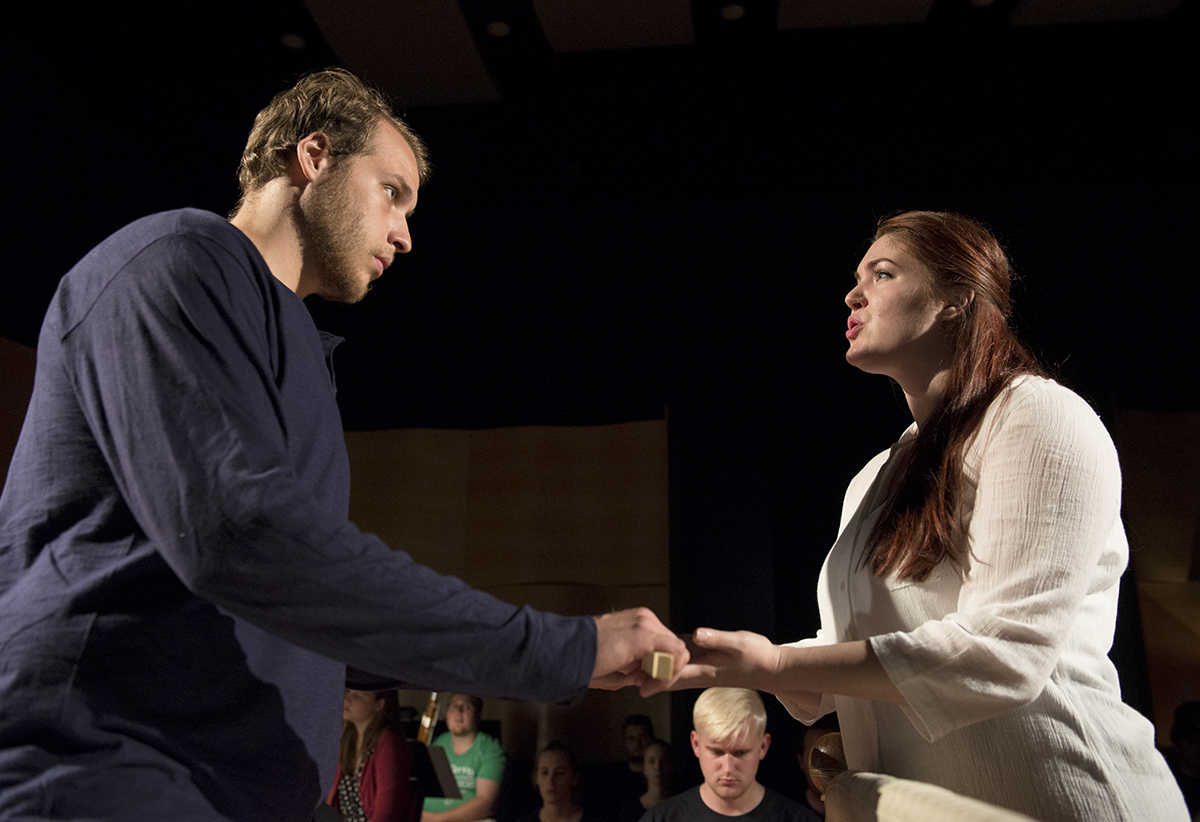 In its original text, Mozart’s The Magic Flute is rife with misogyny and racism.

So John Giampietro rewrote it.

“If you actually read the text, it’s kind of shocking,” said Giampietro, stage director for The Magic Flute. “We’re still telling the story, the hero’s journey. … We’re featuring the female counterpart, giving her an equal say in the journey. It’s not just men who find their true selves.”

The Voice Program’s production of The Magic Flute opens at 7:30 p.m. Tuesday in Fletcher Music Hall, and runs through Friday.

See also: Behind the Scenes at Chautauqua’s ‘Magic Flute’

Mozart’s opera follows the (male) character of Tamino through his journey to enlightenment and self-discovery. In re-writing it for Chautauqua Institution, Giampietro decided to bring the female character of Pamina into the spotlight. The original opera, he said, implies that women should be submissive enough to allow a man to pursue his own enlightenment.

Charles Sy, one of two Taminos, said he is fascinated with Giampietro’s production because it successfully eliminates a lot of the racism built into the score, while bringing focus to issues that still exist today, like domestic violence.

Given that the setting for The Magic Flute is vague and fluid, Giampietro said, the setting will be the dreams of Tamino and Pamina.

“Typically Pamina is Tamino’s reward for overcoming his trials, but what is interesting is how [Giampietro] treated this is that Pamina comes forward and actually leads him through the trials,” said Rebecca Farley, who plays one of the Paminas.

Farley said the changes cause the story to build up to Pamina taking charge and accepting the challenges that were not even presented to her.

“For her, love is more important than anything, and her love for Tamino is what gives her the strength and power to be her own person,” Farley said.

Marlena Malas, chair of the Voice Program, said The Magic Flute as a production lends itself well to a student program. There will be multiple players for a few of the characters.

Four Music School Festival Orchestra students, along with one pianist, will do the job of an entire orchestra. Flutist Allison Hamilton will be onstage while she plays her instrument, interacting with the players.

“I’ve been here for 37 years and this is the first time we’ve done Magic Flute,” Malas said. “How did I miss it? It’s great for young singers.”

Three Pamina characters will interact with two Tamino characters and three students will play the part of the Queen of the Night.

“We’re coming at it from [the idea] that the hero’s journey is actually an inward one,” Giampietro said. “Through our dreams, we get to our deeper self, our true self. The deeper into dreams we get, the deeper into subconscious where all sorts of crazy things happen. There are no rules. It accounts for this sort of strange fantasy in the piece.”

Dreams, Giampietro said, are also where we can discover that everyone is linked.

“There’s that idea that all of us humans on some level, are connected; we’re all the same,” he said. “It’s only in the waking state that we set ourselves apart from each other.”

The rewrites in the dialogue, Giampietro said, were driven by his own poetry, the work of Shakespeare, the poetry of Elizabeth Barrett Browning and other sources.

“We’ve succeeded in telling a story about the path to enlightenment, and they all sort of point to the idea that the journey is one of self-discovery, and the old ways are no use to us,” he said.

Behind the Scenes at Chautauqua’s ‘Magic Flute’