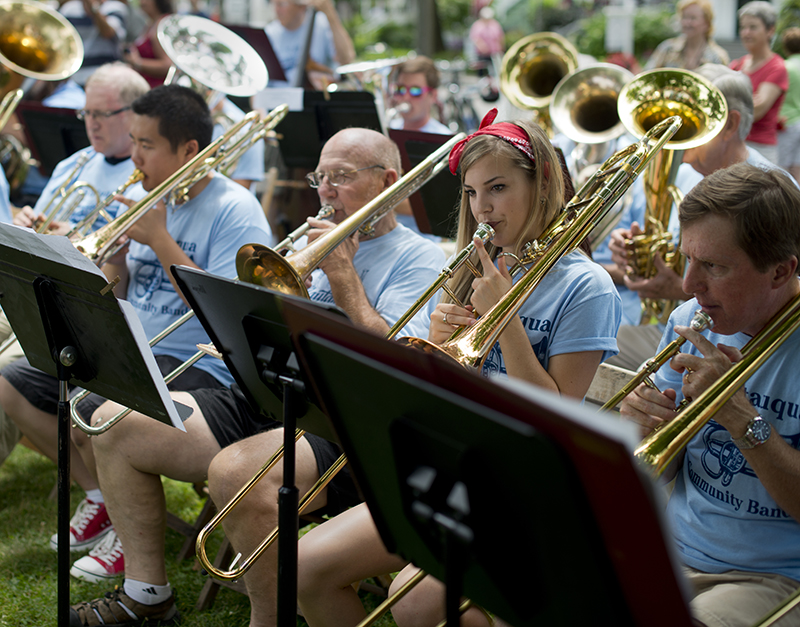 Chautauqua Institution’s summer season provides an outlet for hundreds of professional musicians and music students to perform every day. The Chautauqua Community Band’s annual Fourth of July performance gives those who haven’t devoted a lifetime to music to showcase their talents and find joy in playing instruments for an audience as well.

The program for the concert keeps a patriotic theme, featuring “The Star Spangled Banner” by Francis Scott Key, several American marches, highlights from “Oklahoma” by Richard Rodgers, “Great Movie Adventures” by John Williams, a sing-a-long of classic patriotic songs (see lyrics on Page 2) and a finale of “Stars and Stripes Forever” by John Philip Sousa.

Over the years, the Chautauqua Community Band has drummed up interest from local Chautauquans who played instruments in high school or college, but then gave them up.

Band member Jack Connolly himself said he played the euphonium in high school and college, but then packed up his instrument for 40 years during his career in general management.

“I think the biggest change in the 25 years has been the development of and the inclusion of people that are not only here to play music professionally or as students,” Connolly said. “But also people that come in from outside the grounds and play, people that live inside the grounds and still play their instruments, but don’t play them seriously so that they don’t have the need to play all year-round.”

His fellow band member and euphonium player Daniel Sullivan, who has been in the band for about 20 years, tells a similar story. He was recruited into the band by a retired physician who played the tuba while at a dinner party.

“I said ‘I haven’t played my instrument since 1963,’ and he said, ‘That doesn’t matter. I have music in the car,’ ” said Sullivan, who had a career as a professor and later president of St. Lawrence University.

Now both members of the Community Band and Thursday Morning Brass, they will help provide the soundtrack to an afternoon full of celebration for Chautauquans.

“One of the things in the area of music, that is really unique about Chautauqua, is the way in which professional and student musical groups and resources on the grounds interact with and relate to the amateur,” Sullivan said.

He said that interaction explains why so many amateurs are engaged in music on the grounds.

Sullivan said the professional musicians in the Chautauqua Symphony Orchestra do not see themselves as an elite group that distance themselves from those who are not as good at playing music.

Rather, Sullivan compared the CSO working side by side with the members of the Chautauqua Community Band to LeBron James playing a pickup game with an amateur.

“What makes it special for people like us is that we can come here, not just to consume music and to listen to music, but to make some music ourselves, be recognized for it and be treated respectfully as learners who are knowledgeable,” Sullivan said.

Sometimes the professionals get a taste of something new as well, according to Nancy Weintraub, who plays bells with the band. She said many CSO musicians take the Independence Day concert as a chance to swap out their primary instrument to play a different one with the Chautauqua Community Band.

Despite the celebratory spirit of the concert, many musicians and listeners will have heavy hearts this Fourth of July afternoon as they remember the life of Kay Logan, who played the flute and later triangle in the community band. Logan passed away on June 8.

“She has been a major benefactor for Chautauqua in a lot of different ways,” Connolly said. “But her real love was this community band that Jason [Weintraub] founded.”

Nancy Weintraub, who sat next to Logan in the band, said at the concert the musicians will play “The Syncopated Clock,” one of Logan’s favorite songs, in her honor.

The Chautauqua Community Band will also welcome solo saxophonist George Wolfe back for the fourth time. He said he likes this concert because Bestor Plaza provides a venue with no stage, allowing for less distance between the band and the audience.

Wolfe, who has performed with orchestras around the world, also participates in the Chautauqua Motet Choir. A retired professor from Ball State University, Wolfe used to bring music students with him to Chautauqua to play in the Independence Day concert.

The concert will also include children’s activities, such as face painting starting at 11:30 a.m. Children will be given American flags to participate in a march during the concert.

In case of rain, the concert will be held in the Amphitheater.

Connolly said he looks forward to continued growth of the community band in years to come as finances and recognition for the ensemble increase.

“It is an institution unto itself,” Connolly said. “It started out being ragtag guys all put together. Now it is a full-fledged band made up of some of the most unusual parts that you could imagine.”