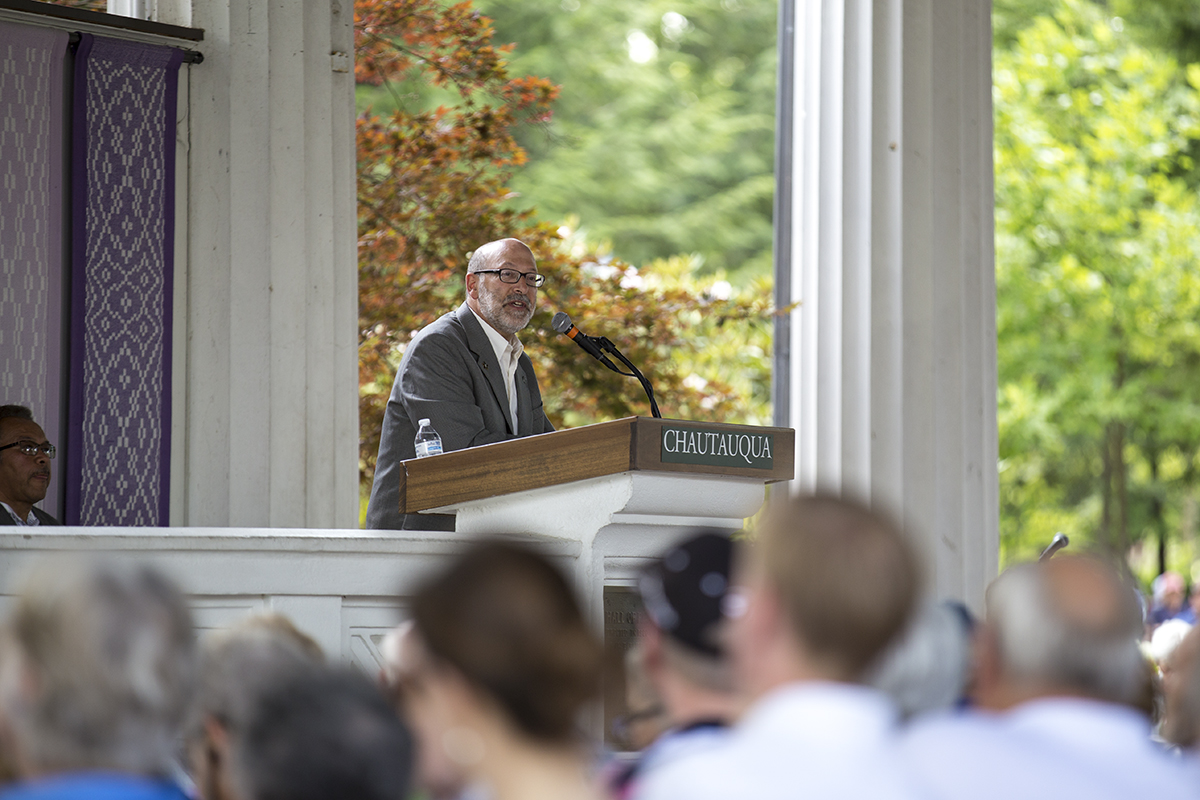 Among Pope Francis’ homilies on the poor, capitalism and global warming, is a teaching he gave in Vatican City in 2014: If an alien asks to be baptized, do it.

Francis’ lesson wasn’t so much about the possibilities of interstellar Christianity, but the need for an inclusive faith. It was the message David Weintraub gave Monday at the Hall of Philosophy. An astronomer at Vanderbilt University, Weintraub has become fascinated with extraterrestrial life and made himself an expert on its religious dimensions: What does it mean for theology if humans are not alone? On Monday, he explored the history of Christian thought on the subject, from Johannes Kepler to Guy Consolmagno, the current director of the Vatican Observatory, and touched on Islamic and Judaic interpretations.

“Looking at religions and how religion might work throughout the universe can … be useful as an exercise for us down here,” Weintraub said. “I think that’s the most useful way to take this conversation. In thinking about the universality or the lack of universality of our religions, that doesn’t just have to apply to other planets or other galaxies, that can apply right here.”

Weintraub said that until just over two decades ago, the question of life on other planets was not one astronomy or religion had to take seriously. Humans simply did not have the technology to detect planets outside of our own solar system, so finding extraterrestrial life seemed highly unlikely.

But with advances in techniques that allow astronomers to find planets by detecting minute movements in stars from their gravitational planes, the number of known planets has grown exponentially since 1995. By studying the atmospheres of those planets for chemical abnormalities, astronomers can detect life.

“By the end of the 21st century, we will study over a million planets. If we discover life on just one, we will know we are not alone,” Weintraub said. “If we discover absolutely no evidence of life on any of them, we will know that our part of the universe is a very lonely place … either way, the answer will be profound.”

Weintraub posited that if there exists extraterrestrial life intelligent enough to contemplate its own existence and mortality, that life will surely invent or discover religion and philosophy, raising the question: Could humans practice their religion on other planets and could E.T. practice his religion on Earth?

For much of the history of Christian thought, Weintraub said, extraterrestrial life was a theological fact rather than a theological problem. For thousands of years, leading thinkers adhered to the “principle of plenitude” that held that if God made other worlds, he made them for a purpose and that purpose had to be the continued creation of intelligent life.

Famous 17th century astronomer Johannes Kepler, Weintraub said, upon learning that Galileo had discovered the moons of Jupiter, thought that Jupiter and its moons were almost certainly inhabited.

In the late 18th century, however, the principle of plentitude came under pressure, Weintraub said. Thomas Paine asked in 1793: Why, if God made infinite other worlds populated with other intelligent creatures, would he come die on this one just because a man and women ate an apple? Conversely, Paine asked, if every world is to have its own Adam and Eve and its own redeemer, wouldn’t God be forced to travel constantly from world to world to die, with barely a moment of life in between?

The Christian faith, Paine concluded, is irreconcilable with the principle of plentitude, or what humans now call extraterrestrial life.

One answer to Paine’s challenge was Seventh-day Adventist Church, founded in 1863. The founder, Ellen G. White, claimed to have seen beings on other planets who were majestic because they never sinned. Sin, White said, is unique to humanity and therefore only humanity needs salvation or Christianity, Weintraub explained.

A Roman Catholic answer came in early 20th century from Jesuit priest Pierre Teilhard de Chardin, Weintraub said. Teilhard argued that since creatures existed elsewhere, original sin did not come from man, but rather was spread throughout the universe by the very act of creation. Jesus Christ was the God of the entire universe, but Christianity was unique to Earth and Jesus would reveal himself to other creatures in a manner appropriate to them. In other words, Weintraub said, one would not baptize E.T.

The Vatican quickly condemned Chardin, renewing that condemnation in 1981.

Consolmagno, the Vatican astronomer, most recently argued E.T. should be baptized, Weintraub said, implying that E.T. is tainted by original sin and can be saved. The resurrection event was unique to Earth, Consolmagno argued, and saved all creation — terrestrial and extra.

Among Protestants, Weintraub said, theologian Paul Tillage has concluded that Christianity is unique to Earth, but that God reveals himself to other creations in other fashions. Creationists, on the other hand, Weintraub said, find the whole question meaningless because they argue that God simply did not make intelligent life outside of earth.

Weintraub concluded his presentation by looking briefly at Judaic and Islamic interpretations of E.T.

For Judaism, Weintraub turned to writer Philip Klass, who is neither theologian nor rabbi, but who was Jewish and wrote a short story about a Neo-Zionist conference on Venus in which aliens arrive, claiming to be Jews. Weintraub concludes from the story that extraterrestrials can be Jewish. He then quoted Rabbi Norman Lamm, who notes that medieval Jewish philosopher Maimonides never considered humans or Earth particularly unique, and concludes that man will still be important if extraterrestrial life exists. In other words, E.T. does not constitute a crisis in faith.

In Islam, Weintraub said, the Quran and modern theologians speak of Allah as creator of all creatures in heaven and the earth, and say that all creatures are Muslim. Creatures on other planets may not be able to fulfill commandments such as making Hajj or praying five times a day, Weintraub said, but scholars say that although Islam is the religion for Earth, Allah will give suitable commandments for other creatures.

“This remarkable conclusion, that Islam is but one way to be a Muslim and there are other paths for Muslims on other worlds to worship the one God whom Muslims call Allah, suggests a path toward religious toleration,” Weintraub said. “If Muslims on Earth embrace idea that intelligent beings will not and indeed cannot be members of the Islamic faith, perhaps then intelligent beings in our own world can also practice different faiths.”