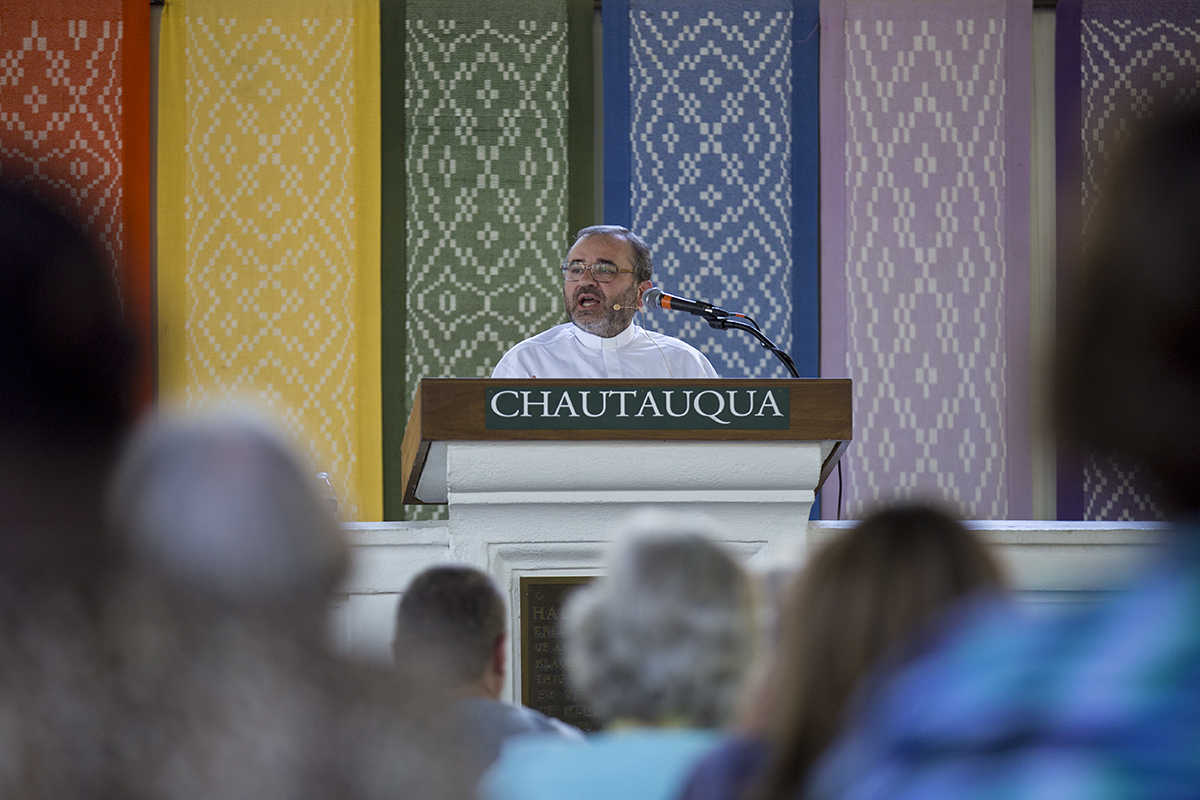 Jesuit Priest Fr. José Gabriel Funes, S.J., fell in love with space 47 years ago to the day he took the stage at the Hall of Philosophy Wednesday afternoon.

That was the night a 6-year-old Funes watched from a small black-and-white TV in Argentina as Neil Armstrong set foot on the moon, changing the course of human history and Funes’ life. He went on to earn a Ph.D. in astronomy and eventually became the director of the Vatican Observatory.

Now he’s engaged in thinking through the religious, scientific and philosophical implications of finding intelligent extraterrestrial life. He believes finding extraterrestrial life would complete a revolution in human thought set off nearly 500 years ago, when Nicolaus Copernicus published On the Revolutions of the Heavenly Spheres.

“I believe the roadmap to another Earth to be another Copernican Revolution,” Funes said.

Throughout history, humanity’s curiosity has driven them to look out at the stars, Funes said. But that search was not just scientific or philosophical, Funes said, it was also religious. He cited the Biblical scene where God tells Abraham to count the stars in the sky and tells him that will be the number of his descendents. He quoted Vincent van Gogh, whose most famous painting is “Starry Night”:

Astronomy, then, has always had theological as well as scientific implications, Funes said.

Chief among those scientific-theological questions, Funes said, has been the issue of whether humans occupy a unique place in the universe, what Funes called the battle between the Anthropic and Copernican principles. In Ancient Greece, Epicurus and his followers held that this world was just one of many holding intelligent life. That is Copernican, Funes said, because it makes man just one part of a vast universe. Aristotle argued there was only one universe, with Earth at its center. That is anthropic because it places humanity at the center of creation.

The Aristotelian argument held sway for 2,000 years, along with his geocentric view of the universe, with the planets, stars and sun rotating around Earth. The theological implication was of man occupying a unique role in the world, Funes said.

But Copernicus upended that cosmic model with his finding that Earth is just one of several planets orbiting the sun, and successive discoveries of stars and planets thousands of light-years away has crushed most of the scraps that remained standing.

Funes invited the crowd to contemplate the vastness of the known universe. Consider the world population of 7.4 billion, he said. To study the full cosmos equally, he said, each person alive would have to study 14 stars. It’s also the number of neurons in the human brain and the number of grains of sand on earth. Then consider that most of those stars have multiple planets orbiting them and that NASA’s Kepler Mission has found 2,325 Earth-sized planets as of May (astronomers predict the total number of earth-sized planets in the Milky Way to be around 100 billion, with 50 sextillion in the whole universe).

Finding life on one of those planets, Funes said, would complete the Copernican Revolution, dispelling any notion of humanity occupying a privileged location in the universe. Funes underscored the theological importance of that transposition by using almost precisely the same language he used to describe Abraham’s journey from Aram, his birthplace, to the promised land.

“Copernican Revolution in simple terms means going out, leaving our own convictions, our well-known land and culture, to change our mindset if necessary,” Funes said.

Funes called for religion and philosophy to be aware of and adapt to those and future scientific findings and for greater interdisciplinary dialogue around the implication of new findings and outreach to make high school and college students think through those issues.

But whatever scientists find, Funes said, humanity needs to keep in mind that interstellar travel is all but impossible and if astronomers find another Earth, they may well not be able to reach it.

“Earth is only home in the solar neighborhood, so we should take care of our common home,” Funes said.