Astronomer Phil Plait has an asteroid named after himself: 165347 Philplait. 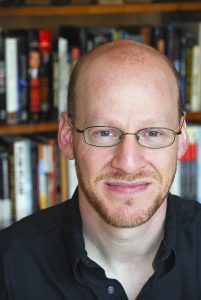 “It’s a kilometer or so across, and (like me) slightly eccentric; it orbits the Sun on an elliptical path between Mars and Jupiter,” Plait wrote for Bad Astronomy, the blog for which he’s penned thousands of posts exploring, debunking and evangelizing the world of science.

But however delightful it is to share your name with a chunk of extraterrestrial matter hurling through space, Plait comes to Chautauqua to remind, as his 2011 TEDx Talk put it, how “an asteroid impact can ruin your whole day.”

Plait will speak at 10:45 a.m. Monday in the Amphitheater to kick off Week Four, themed “Our Search for Another Earth,” with an existential spin on space exploration.

“We talk about the search for another Earth,” he said. “I’m going to be talking about protecting the one we have.”

That’s not to say Plait is against space exploration. He praised those efforts for technological advances in areas like medicine and materials science, not to forget the more pedestrian examples like astronaut pens, Tang and cellphone cameras — “a direct descendent of astronomers trying to develop cameras for Hubble Space Telescope,” Plait said.

“It changes the way we look at ourselves,” he said. “Are we special? Well, yes. But are we alone? Maybe not. It means we are part of a much bigger thing that we didn’t even consider. That’s what science does.”

Plait has no doubt there is another Earth-like planet (“I would bet every penny I own,” he said.) Recent decades have brought new possibilities for the universe — three different moons in our solar system possibly able to support life, for example — but those discoveries remind scientists of the extraterrestrial threats posed to Earth itself.

In 2012, a meteor exploded in the sky over Russia, shattering windows with its shock wave that injured more than 1,000 people. Things get worse when the object smacks into Earth; the almost mile-wide Meteor Crater, located just outside Winslow, Arizona, resulted from the impact of a meteorite a little more than 100 feet across. And then there is the massive Chicxulub crater buried around Mexico’s Yucatan Peninsula, a more than 100-mile-wide reminder of the impact that spelled doom for the dinosaurs.

Plait said those “dinosaur killers” aren’t humanity’s biggest problem. Those asteroids are huge — miles wide — and astronomers can already see them, track them and prepare for them. It’s the smaller ones the size of a football field or less that are the real threat, with potential to devastate cities and other populated areas. Current technology makes it difficult to monitor those smaller objects until they are relatively close.

One smaller asteroid, ominously named Apophis (after the Egyptian god of chaos) recently had a slight chance of colliding with Earth. Revised estimates suggest that’s no longer the case, Plait said, but examples like that teach scientists how potential asteroid impacts may occur and how they can be prevented.

Those solutions are unlikely to involve sending Bruce Willis to detonate a nuclear bomb, a la “Armageddon.” In fact, Plait said, blowing up a huge asteroid may be unwise, turning one impact into a thousand as it breaks into smaller chunks.

Most fledgling solutions involve deflecting an asteroid rather than destroying it, he said. Depending on the size, composition and path, the answer could be as straightforward as tugging it into an alternate orbit. Another tactic involves painting the asteroid. That causes the object to absorb sunlight differently, slightly altering its trajectory.

Regardless, Plait said, death from above shouldn’t be humanity’s primary concern. He pointed to climate change, along with those who erroneously believe certain presidents are lizard people, the world is flat and vaccines cause autism; asteroids are scary, but humans are even scarier.

Asteroids are the long-term problem, Plait said, and it’s time to slowly find some long-term solutions.