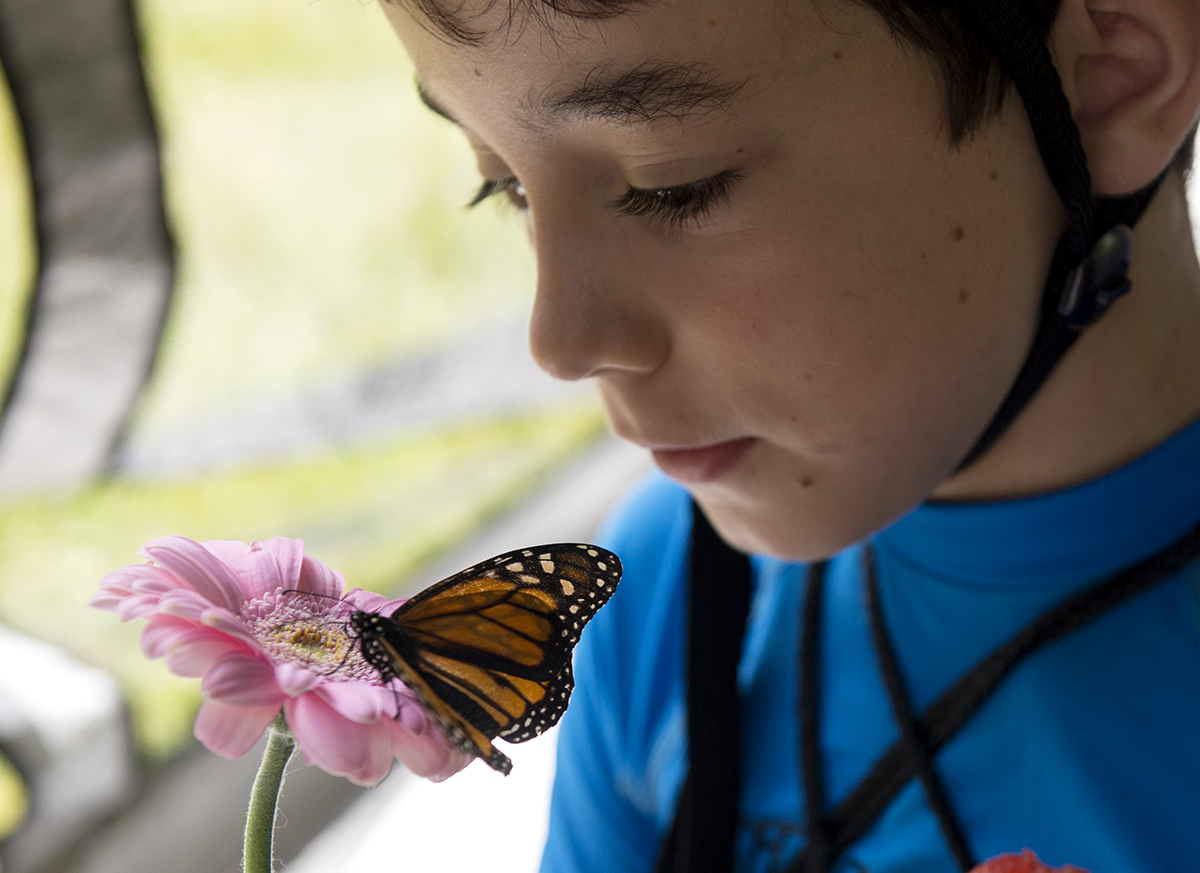 The other week, two monarch butterflies escaped. The Bird, Tree & Garden Club had taken over Lincoln Park to demonstrate the monarch life cycle, and Chautauquans filtered through one of the tents to immerse themselves in a cloud of orange and black wings.

In that shuffle, two butterflies took flight, and one perched itself atop a nearby tree. Some of the organizers spotted the fugitive, waiting and watching below to see if it would fly within arm’s reach. Eventually, they gave up.

“Later that day, my kids came and got me upstairs and said, ‘There’s a monarch in our garden,’ ” said Lynda Acker, a BTG board member.

Acker, along with Betsy Burgeson, supervisor of gardens and landscapes, will be in conversation at 4:15 p.m. Monday in Smith Wilkes Hall to help other Chautauquans create gardens of their own that attract and support butterflies at all stages.

A master gardener and biologist by training, Acker designed her home’s lush gardens with monarchs in mind. Her children’s butterfly sighting is a sign she knows her stuff; monarchs don’t appear in large numbers until later in the summer.

Those butterfly gardens are about more than aesthetics — they support a species that’s seen a more than 90 percent population decline over the past two decades due to pesticide use and habitat loss. Chautauqua and the surrounding region are an important stop as a new generation of monarchs prepares to migrate from the northern United States and Canada to spend the winter in central Mexico.

“We think we’re a pretty cool species being able to build an airplane, but, holy cow, they build their own airplane inside a chrysalis and fly 5,000 miles,” Bergson said, referring to the monarch’s winter migration. No known insect species migrates as far.

Milkweed is the basic requirement for butterfly gardens, serving as the monarch’s sole host plant where it lays eggs that hatch caterpillars. Those larva munch on milkweed leaves as they prepare to transform into a butterfly.

Mature butterflies need grasses or similar shelter plants to protect them from wind as they drink nectar from a variety of flowers such as aster and goldenrod. Shallow, muddy puddles are also necessary to provide the nutrients that prepare monarchs for their southbound trek.

The whole setup intends to replicate the actual ecosystem that supports the butterfly life cycle, Acker said, which is why she calls for muddy puddles in the garden rather than a pristine bird bath.

“If you’re ever at the edge of a pond, and it’s sunny, and you’ve seen just a million butterflies land there and wondered, ‘What on Earth are they doing?’ ” Acker said. “They’re sopping up nutrients.”

But even if the garden microcosm has all the right ingredients, Burgeson and Acker said people can undo any benefits through improper care. Part of that means being OK with nibbled-on plants — the idea is to give caterpillars food, after all.

The larger, more important commitment involves quitting commercial pesticides and herbicides. Acker said the intention behind spraying is often good, such as eliminating disease-carrying mosquitoes, but spraying often eliminates beneficial species in the process. Burgeson also mentioned the concept of drift, where your neighbor’s pesticides and your dog’s flea medicine may unintentionally impact your garden’s ecosystem.

The answer, both agreed, is to find natural alternatives for pest control whenever possible.

Burgeson recommended planting a mix of native plants that can also sustain “good” insects, such as ladybugs and praying mantises, to take care of pests on their own.

“Instead of looking at this as your garden, it’s about looking at it as a habitat,” she said. “By doing that, you’re bringing in those good guys that will help you.”