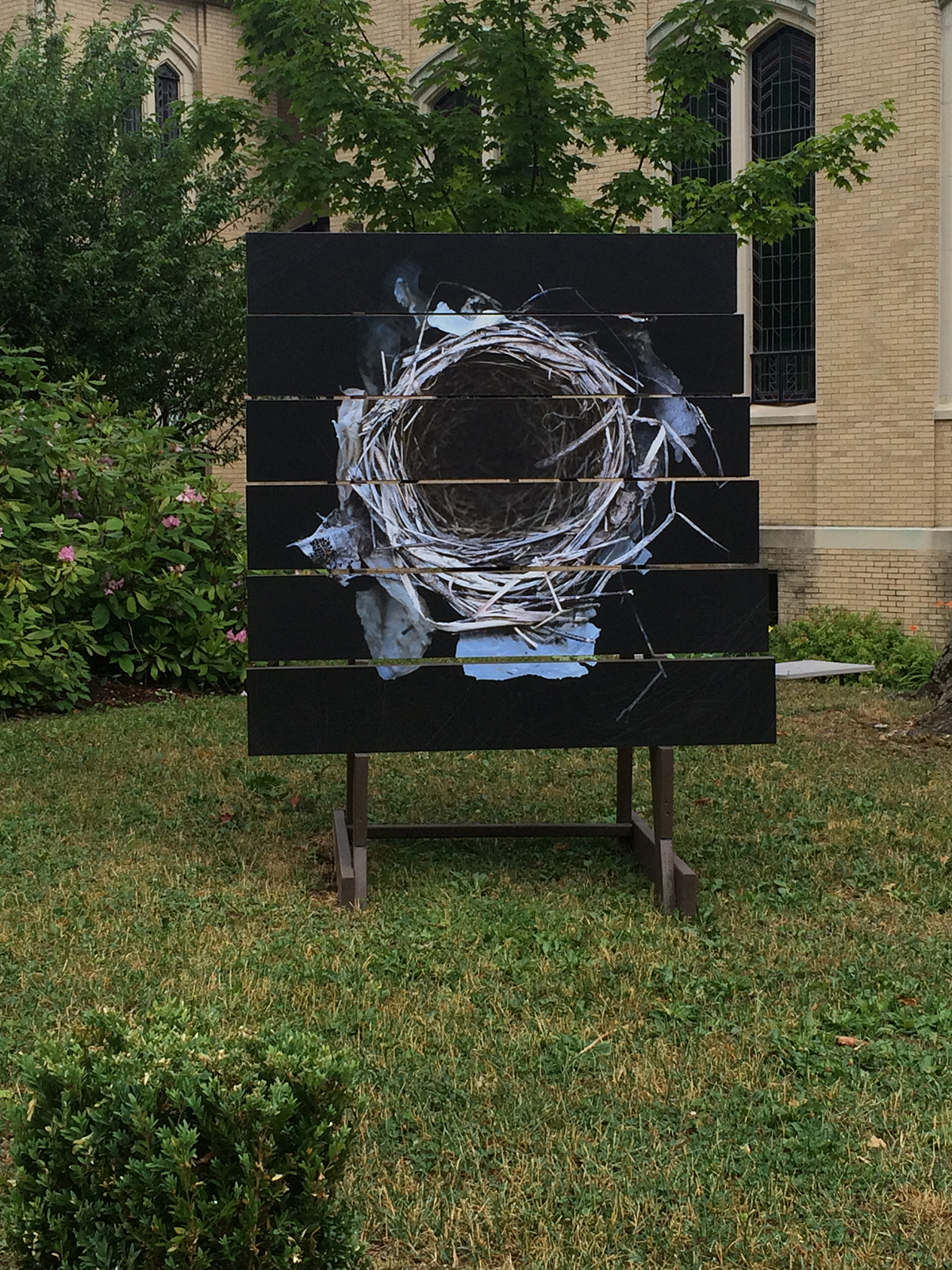 Back home, sculptor Brian Rust is known as the “bird guy.” The artist’s reputation is so notorious that people in Augusta, Georgia, even bring him birds’ nests to use for his artwork.

Rust, who teaches sculpture at Augusta University and taught the subject this summer at the School of Art, has three installations on display at the Melvin Johnson Sculpture Garden.

Ranging from 6 to 8 feet, one of the pieces depicts broken shards while two others feature bird nests. He said birds’ nests are recurring subjects in his work, and he has collected so many and people have given him so many that he has lost track of the exact origins of the nests shown in his installations.

To him, bird’s nests are not only beautiful — they also speak of interesting dualities like fragility versus security and man-made versus natural objects, Rust said. Although nests are used as vessels for protection and can be tightly woven, sometimes they can fall apart and have things stick out of them.

Similarly, even though nests come from natural materials and birds assemble them, they often contain materials such as string or plastic that the birds reclaimed and put in the nests.

“I like that idea of something being natural but then these days, what is nature? It’s always a mediated thing,” Rust said. “There’s always a human touch to everything.”

Another installation that Rust is showing in the garden depicts broken shards, and similarly touches on the contrast of artificial and organic. Even though things such as old bottles and crockery pieces are man-made, they can be buried deep in the Earth and eventually degrade back into nature.

Rust said he put the birds’ nests and shards through a flatbed scanner with a box over them so the background looked black, and then edited the photos in Photoshop, before having them commercially printed. He even built the wooden frameworks himself to support the pieces.

Even though the pieces use photography, Rust said he still sees them as sculptural installations because the prints are separated into multiple segments so they are visually dynamic and change as people move around them.

“We always want to stand in front of the doorway and look through the window and through the door, so I think that’s a very human desire,” Rust said. “I thought that these would be nice so that people saw them as fragments; they would come up and want to move around until they can see the image and then every time they saw it, it would go from being deconstructed or fractured to being a whole image.”

And although he can imagine the sculptures being shown inside a gallery, Rust said he likes the effect they give by being placed outside in the sculpture garden.

Rust said the installations tie together his interests in sculpture and photography, but he also works with ceramics and other art forms. Such versatile interests are the norm for many artists nowadays, he said, such as students at the School of Art. Even though the studios at Chautauqua are broken up by painting, sculpture and ceramics, he said students are enthusiastic about many paths.

“Everybody’s like, ‘I’m a painter, but I want to try ceramics,’ ‘I’m a ceramist, but I want to try some sculpture,’ ” Rust said. “There are so many options: There’s digital options, there’s video options for artwork … then I think ceramics is becoming very sculptural these days. … So I think that kind of blending or broadening out is more the trend.”

Being at Chautauqua allowed him to keep exploring different mediums and be able to collaborate with other artists, Rust said. He lived in the same residence hall as other artists and their studios were so close that people would often poke their heads into one another’s spaces. Last year, he collaborated with a painter in making plates, and this year he helped another painter throw coffee cups in the studio.

Rust also said the environment at Chautauqua was naturally inspiring and gave him a break from his normal schedule at Augusta.

“As a teacher, the one thing is that if you’re not careful you run out of time. If you end up teaching and having a family and doing all this stuff, then you don’t have time to continue to be creative,” Rust said. “The environment here is just so stimulating. … You get here and just get invigorated, … so this is just like this beautiful little time period to come here and be creative and get out of your regular rut and try new things.”