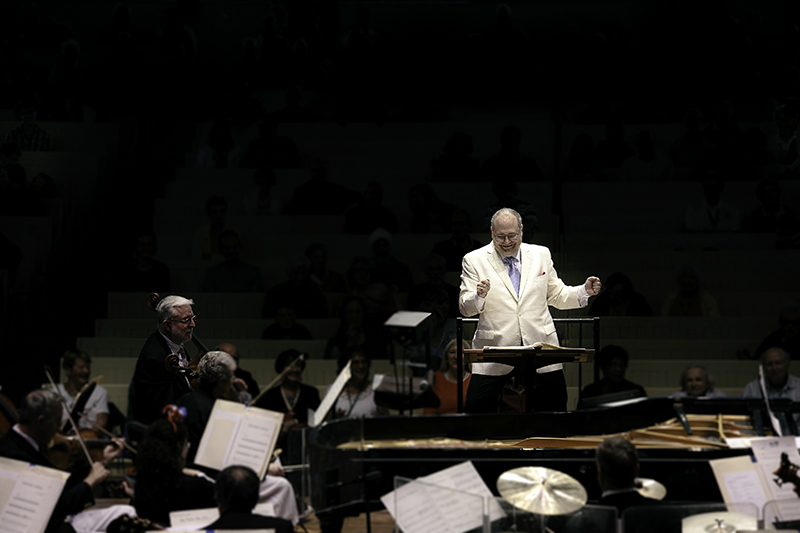 When Stuart Chafetz performed with the Music School Festival Orchestra as a student, it was the height of the ’80s.

At the time, he said, the hardest aspect of getting the chance to play with the Chautauqua Symphony Orchestra as a student was maintaining the all-white dress code.

Chafetz will have a chance to relive those glory days at 8 p.m. Monday in the Amphitheater while conducting the annual CSO Independence Day Pops Celebration. The night’s color palette can be expected to add some red and blue, though.

He said the performance will be a real American show with tunes that define the country’s culture.

Solo vocalist Nicole Parker said the creative expression of the show exemplifies the ingenuity of our forefathers who created the United States.

Those patriotic sentiments will be abundant at the concert, joined by both ’80s music and Broadway tunes to create a multi-generational show.

“I want the entire family to get something out of it,” Chafetz said. “You can be there with your grandmom and your great-grandkids, and everyone has a great time.”

Chafetz, normally the principal timpanist of the CSO, has been conducting the concert for about 15 years. He and Parker have been collaborating on performances with orchestras across the country for two years.

The duo works together in a show titled “Totally ’80s,” which features songs such as “True Colors” by Cyndi Lauper and “I Will Always Love You” by Whitney Houston.

“[Parker] sings the you-know-what out of it,” Chafetz said

Chafetz described the ’80s portion of the show as “near and dear” to his heart.

“It brings back so many good memories,” Chafetz said. “Especially when I was 50 pounds lighter and had hair.’”

Parker’s specialty lies in a different part of the concert, when she trades in her spot on a Broadway stage for the Amphitheater tonight in her Chautauqua Institution debut.

Parker, who starred as the wicked witch in Wicked, said taking off the green paint and heavy costume to sing “Defying Gravity” as herself provides a very different experience.

The amount of musicians in a Broadway show does not match the extraordinary experience of singing with a full symphony orchestra behind you, Parker said.

The first half of the concert will conclude with a duet by brothers Ilmar Gavilán and Aldo López-Gavilán composed by López-Gavilán. In addition, the two will perform in the Logan Chamber Music Series concert today and in the Family Entertainment Series on Tuesday.

The second half of the show transitions into a familiar set of patriotic tunes, according to Chafetz.

The idea of the concert, according to Chafetz, is for the audience to just enjoy themselves. He said he encourages singing along and dancing.

“One thing about Chautauquan crowds is that they love to sing and dance,” Chafetz said. “And they are the best at it.”