Chautauqua is a Conductor’s Paradise 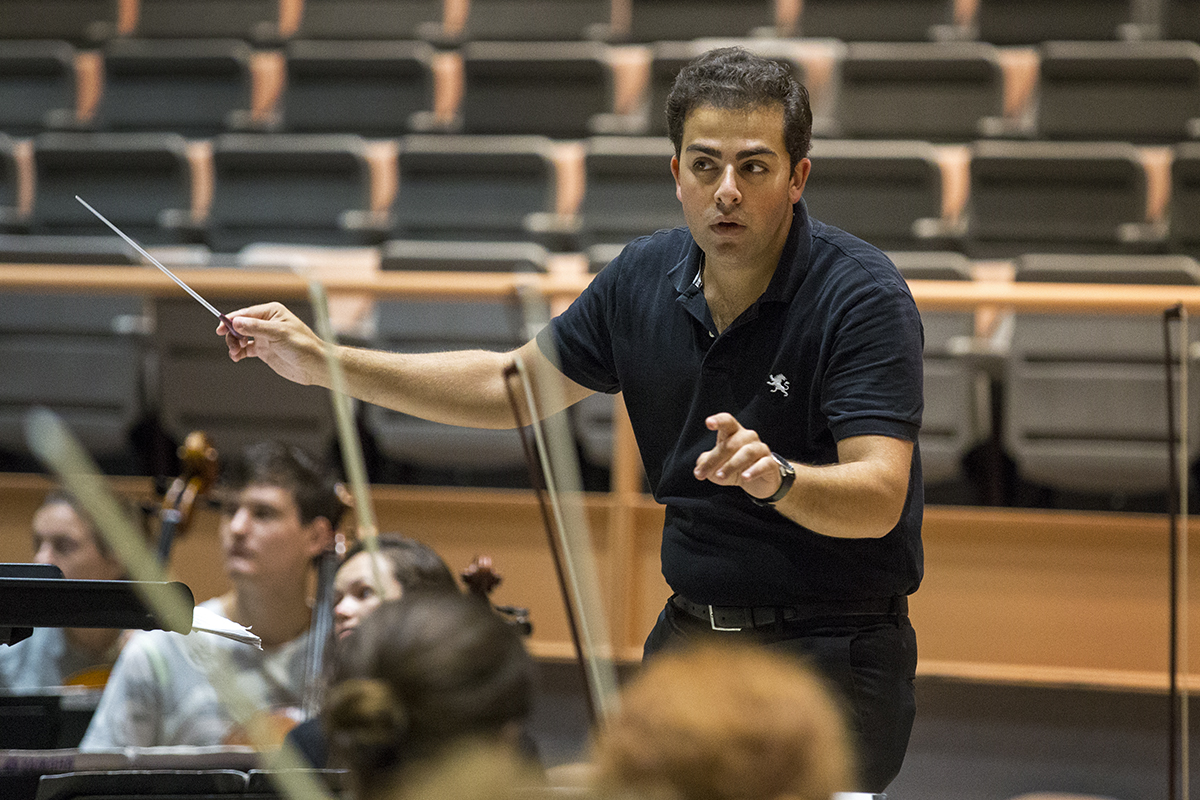 Louis Lohraseb heard of the David Effron Conducting Fellowship while he was an undergrad student. If there’s one fellowship program to get yourself to, his colleagues told him, it’s Chautauqua Institution.

Lohraseb, this year’s conducting fellow, will lead the Music School Festival Orchestra — which performs for the second time this season at 8:15 p.m. tonight in the Amphitheater — in “Eating Flowers” by Hannah Lash, a contemporary piece that was commissioned in 2015.

“One of my first conducting teachers [James Walker] conducted [the MSFO] decades ago,” Lohraseb said. “Even before I had begun to earnestly pursue conducting, I had heard about Chautauqua.”

While he was studying for his master’s, Lohraseb went to a festival at Castleton University, where he met Vlad Vizireanu, a past conducting fellow.

“He said [Chautauqua] is a great experience for conductors,” Lohraseb said. “Of course, working with Maestro [Timothy] Muffitt is a joy, and Vlad was right.”

Now pursuing his doctorate at Indiana University, Lohraseb is a student of Effron, someone his early mentors advised him to work with some day in his future.

“It all sort of came together,” he said. “Once you start putting it all together, there’s a lot of connections there.”

Lohraseb said he sees that conductors are drawn to the Effron fellowship because of the prestige of Chautauqua.

“We know what goes on here at the music festival and the opera, in the professional orchestra and in general how much there is here,” he said. “And this program has a reputation for really giving you a lot of hands-on activity.”

He said at other similar programs, the amount of rehearsing and performing is not as high.

“That speaks to the generosity of Maestro Muffitt,” he said. “Already, I can see why people speak so highly of him. I’m hard-pressed to think of another conductor who gets so much accomplished with such a congenial attitude. He really knows how to foster an environment that really makes musicians want to give their best. With that, combined with his musicianship, why wouldn’t you want to come here?”

Lohraseb attended Yale University at the same time that Lash, the composer, was appointed to the faculty. After working with her on composition, and even conducting a few premieres of some of her smaller works, Lohraseb said he came to look up to Lash professionally.

“You’re dealing with a person who was influenced by Renaissance music, by 16th-century polyphony, and by John Adams,” he said. “She was born in ’81 and I was born in ’91, so hopefully 10 years from now, I will have accomplished as much as she has.”

When Muffitt and Lohraseb were corresponding prior to the start of the season about what his repertoire would be for the summer, Muffitt suggested a contemporary piece. Lohraseb said he chose Lash’s new piece because it fit the MSFO’s size and because it would be a test.

“When I showed the piece to my old teacher James Walker, he said it would be a challenge for the orchestra and the audience,” Lohraseb said. “Yes, it is contemporary, but there is such beautiful music in it and it operates in omantic and classical paradigms for a great deal of it.”

He said the piece is a juxtaposition of new and old ideas.

“I hope that the audience will like it,” he said. “I am of the belief that we should champion new music. And I also think that music should be aesthetically pleasing. … [‘Eating Flowers’] definitely meets that bill.”

“Eating Flowers” earned its title because the composer feels that she soaked in, or ate, her favorite composers such as Ravel and Rimsky-Korsakov, Lohraseb said.

“[Lash] was inspired by this really beautiful and lush music,” he said. “While she does not quote them in the piece, she feels they nourished her creativity. And out comes ‘Eating Flowers.’ ”

The percussion section will drive the piece with all mallets, and there is a continuous ostinato in all three major sections, which Lohraseb said changes and creates an incredible effect.

Also on tonight’s program, the four vocalists who won the SAI competition in 2015 will perform alongside the orchestra, an opportunity that is offered to all SAI winners. Soprano Elena Perroni and tenor Evan LeRoy Johnson will perform in the “Cherry Duet” from L’amico Fritz by Pietro Mascagni. Mezzo-soprano Amanda Lynn Bottoms will sing “O Maria” from Mazeppa by Pyotr Ilyich Tchaikovsky. Bass-baritone Kidon Choi will perform “Bella Figlia Dell’amore” from Rigoletto by Giuseppe Verdi.