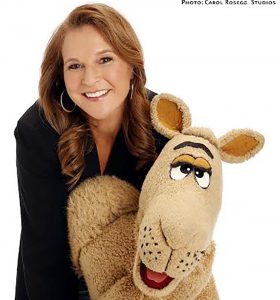 There’s a lot more to Lynn Trefzger’s job than not moving her lips.

Trefzger is a ventriloquist with almost 40 years of experience. She’s bringing her comedy act to Chautauqua Institution at 6 and 7 p.m. July 20 in Smith Wilkes Hall as part of the Family Entertainment Series.

“I think people say ventriloquist and they automatically look to see if your lips are moving, which is the main part of it; that’s why you are a ventriloquist,” she said. “But it’s also bringing the illusion of life to a character, you know. It’s also making the puppet feel alive.”

Trefzger is one of a relatively small number of full-time ventriloquists. She started ventriloquism at age 9 when she asked for a puppet from a catalog for Christmas. She found the practice came fairly easily.

“I [could] get away with saying things that normally I’d get in trouble for,” Trefzger said.

She began performing at age 10 when a family friend got her a gig. She eventually expanded to birthday parties, nursing homes and hospitals and has been a ventriloquist ever since.

“It’s just something that, you know, I’ve always done,” she said. “I can’t imagine not doing it.”

Trefzger’s brand is comedy, but parents can expect it to be family friendly. She works for Disney Cruise lines, where’s she’s expected to entertain adults and children at the same time. She also does corporate and college shows.

Trefzger’s favorite of her characters is a small 3-year-old girl puppet named Chloe. Much of her inspiration for Chloe comes from her five children.

Other characters in Trefzger’s repertoire include Jud, an old man who often discusses marriage, a goofy camel named Camelot and a big bear appropriately named Bear.

Trefzger tries to help the audience forget about their lives and have a fun time.

“I’ve been doing this many, many years and I still love going … to work and saying, ‘I just love my job,’ ” she said.

The audience won’t be taking a passive role at the show.

“What I’m known for is using a lot of audience participation,” she said.

At the end of the day, the goal is to give the puppets personality.

“The best compliment is to say, ‘Oh, I stopped watching you. I was watching the puppet the whole time,’ ” she said.