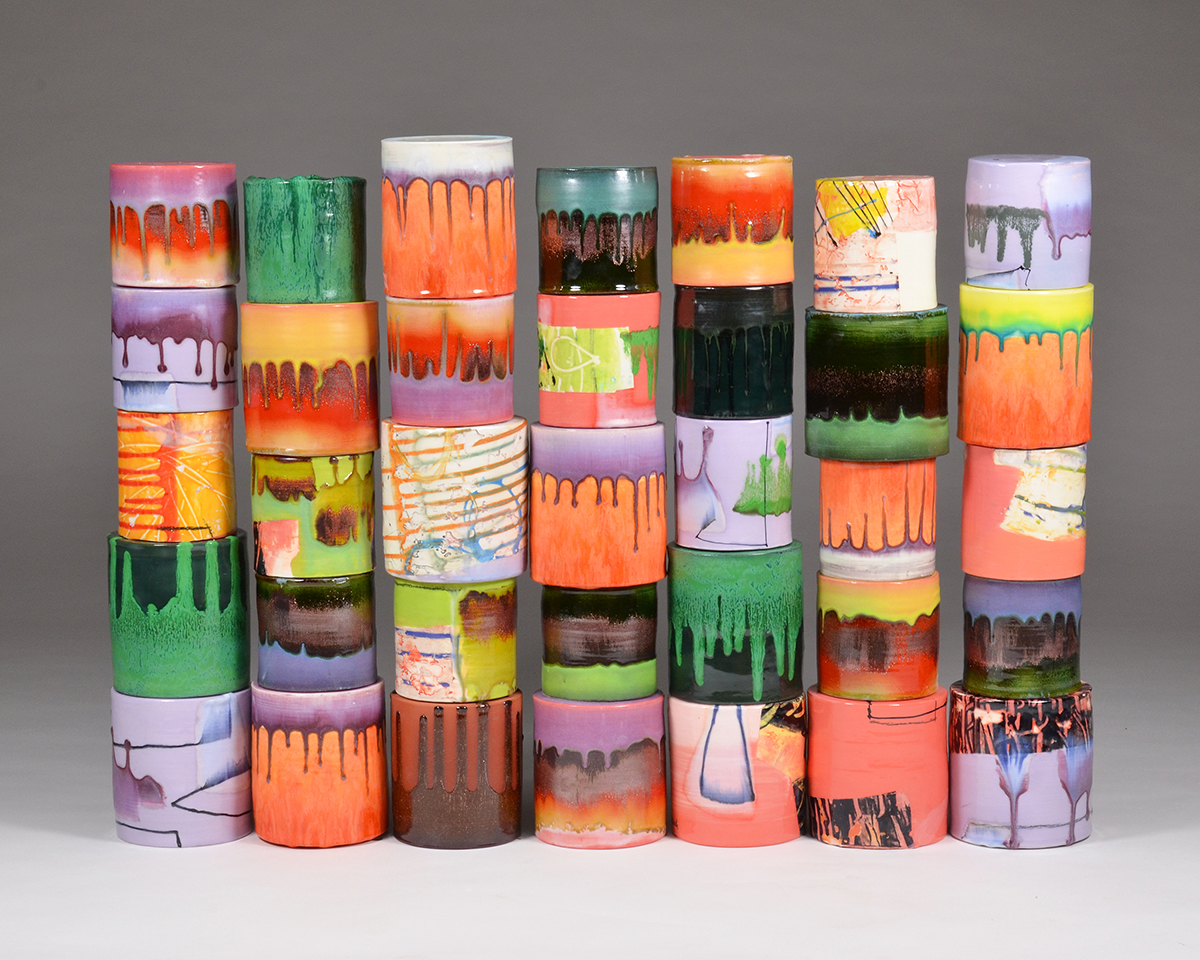 What do ceramics, metal wire, wax, plywood and silk have in common? Those materials will all be featured in the new exhibit, “Gradations: A Sense of Successive Stages or Degrees,” opening with a reception at 3 p.m. July 20 in Strohl Art Center.

Seven artists across different disciplines created works especially for the exhibit, which will run until Aug. 23, said Judy Barie, the Susan and Jack Turben Director of VACI Galleries. She said she visited the Albright-Knox Art Gallery a few years ago and saw works by Jackson Pollock and Lee Krasner across from each other and noticed that even though they were so different, they related to and complemented each other through subtleties such as drips or paint coloration. That trip eventually inspired her to curate an exhibit where gradations of color or size exist within each artist’s works, as well as across different artists’ pieces.

All the artists work with different materials, Barie said, yet there are common threads between their work. For instance, Mia Tarducci’s paintings are complemented by works from Lauren Mabry, who is “painterly” in her ceramic work, Barie said. Other artists in the exhibit include Mary Giles and Carrie Seid, who work with metals and fabric; David Henderson, who creates geometric shapes with plywood; encaustic painter Tom Brydelsky; and glass artist Margaret Spacapan.

A recurring idea for many of the artists in the exhibit was the concept of materiality and letting the natural qualities of clay or plywood come alive in the final pieces. Mabry, who made five ceramic pieces for the show, said her work is very much processed-based and she uses glaze as an active component of the piece. She often plays around with color even after firing is complete so she can still change the direction of the glaze’s gravitational pull, and so some colors are moving downwards while others are swooping up in the air.

In one work, for example, she said there are two separate pieces of ceramic that are held up by glaze, and one form is pouring glaze into the second form. The glaze travels, flows and even spills into another form. Even though she used to follow the idea of making pieces that look perfect and flawless, Mabry said she eventually embraced the natural qualities of the material and let imperfections occur.

“I was enjoying the unpredictable elements of working in ceramics, like how a glaze runs and what color a thing is going to turn,” Mabry said. “I just felt like when something blew up one day, or something cracked, well, this is part of this experience. This is part of the material and so I’m going to integrate this into the work and make it part of the resolved piece rather than hide it, avoid it or start over.”

Similarly, Henderson said his work is based on the characteristics of his materials. Henderson, who has four pieces in the show, laminates and nails down plywood to create geometric shapes such as a cone or a torus, which resembles a doughnut.

Henderson said instead of focusing on conceptual ideas, he prefers to work with shapes and forms. Starting with a computer model to make templates, he creates lightweight pieces that play with 3-D form with the wall. Gradations happen as layers evolve throughout a piece, and the wall intersects the pieces to give additional visual dimensions to the shape.

Two other artists, Brydelsky and Seid, are more conceptual in their work. Brydelsky created four gridded encaustic paintings for the exhibit by applying wax over photographs of landscapes, and each section of a piece has a different feel to it and look smokier as it progresses.

Brydelsky said the wax is a unique material that infuses a certain atmosphere to the photographs in a way that evokes ideas related to memory and perception.

“There’s certain places that you stumble upon or you come to, however that happens, that maybe trigger something in your subconscious,” Brydelsky said. “You feel like you’ve been there before or they’re somehow magical and something special about them that you can feel and the work strives to find that space. It’s not always successful but when it is, it makes the piece very magical.”

For the show, Seid created five pieces made of aluminum and copper inside an aluminum box, which she covered with silk fabric to become translucent. She said she painted inside the form to push the idea of an “illusory space” where the viewer tries to catch reflected light in the piece but as they move back and forth, the structure changes as well.

One reason she was interested in light was to use it as a metaphor for deeper ideas, such as hope and longing, that viewers can relate to.

“I want my work to be more than the sum of their parts so that when you look at them and encounter them and move from left to right in front of them, they change,” Seid said. “That’s very symbolic of life itself and the human condition, that we’re on our path and we may think we know where we’re going or what our life is to be about, but then something happens and everything changes except the need to stay alive, the will to live, the will to keep going and to maintain hope.”