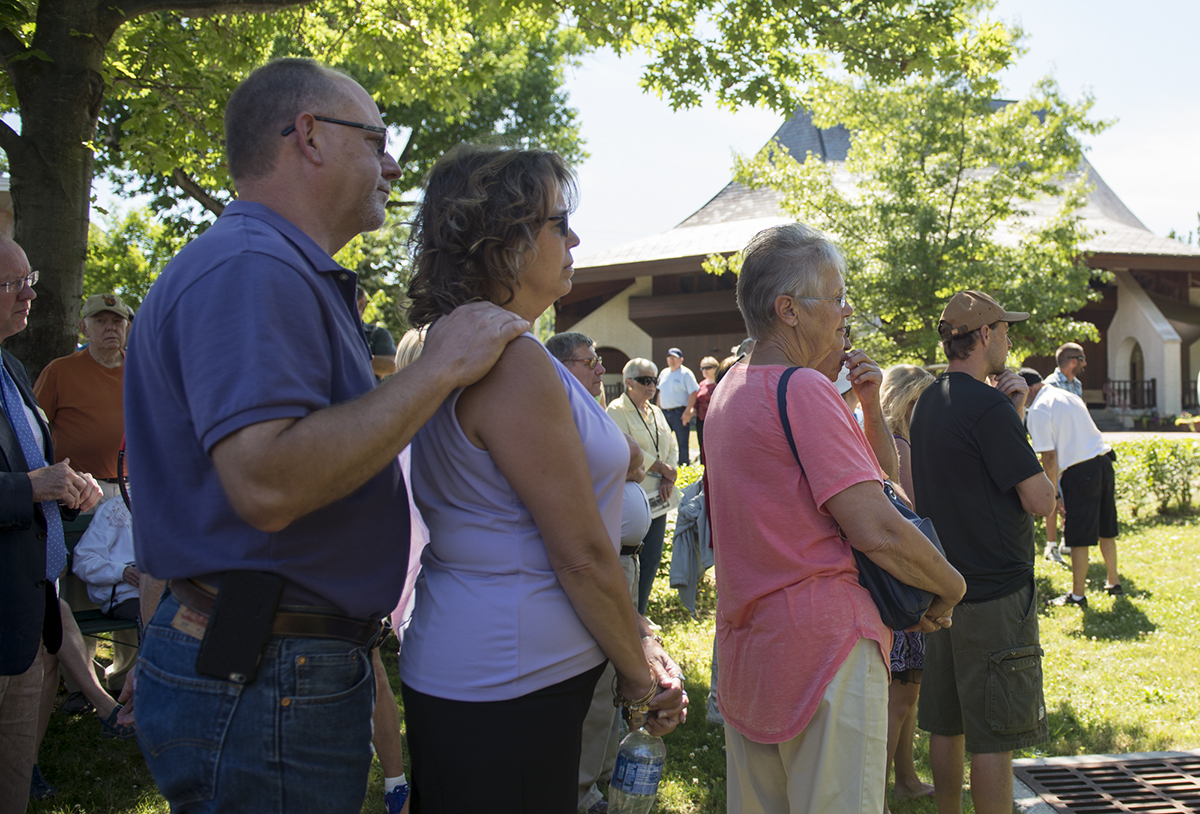 Channels of warm orange brick weave beneath lofted river birch and red maple, the shaded textures of verdure camouflaging various insects and frogs. Their voices are loud and distinct, clicking and croaking. The trees emit a brisk cologne.

Family, friends and colleagues gathered June 30 at the park to celebrate Kiblin, the late grounds, gardens and landscapes manager at Chautauqua Institution. Kiblin was instrumental in the development and construction of the park, helping convert a former gravel lot into the thriving ecosystem it stands as today.

“This is [Ryan’s] thesis,” said Doug Conroe, former director of operations and project collaborator of Kiblin’s. “It embodies a number of the focal points that she was involved with on the grounds. It’s not a singular-focused entity. It’s a park that involves walkways, dark-sky friendly lighting, a variety of tree species, variety of bushes, variety of perennials and it puts together all the different aspects of her job and her creativity at Chautauqua.”

The Institution had to implement a strategy to help mitigate runoff from its uphill parking lots and Chautauqua Golf Club. The stormwater park became part of the solution. Initially, Conroe worked with civil engineers and a landscape architect. Kiblin, who was supervisor at the time, realized the actual project.

“She was the ‘enhancer’ of the idea, adding her creativity to that design,” Conroe said. “She personalized it.”

The relationship between Conroe and Kiblin was a special one. At the beginning, Conroe was Kiblin’s mentor, mentioning how she had gotten “an infection from [his] passion of the lake.” As time progressed, Conroe proudly watched the roles reverse.

Conroe went on to thank the Bird, Tree & Garden Club — where Kiblin had become a “fast friend” — for their continued enhancement of the park, having donated an immediate $10,000 following Kiblin’s sudden passing in 2014. With additional support from the BTG and members of the community, the club recently established the Ryan Kiblin Memorial Stormwater Park Endowment. A plaque was unveiled at the celebration.

“[We] knew we wanted to honor Ryan’s life and her achievements,” said Suzanne Aldrich, president of BTG. “Our immediate thought was to ensure the maintenance of this garden. This serene and beautiful [place] pays tribute to her.”

Aldrich spoke of how BTG board members, who live around the park, recalled a pregnant Kiblin working off-hours in the afternoon heat, all to ensure that the tender shoots survived and were properly watered.

Kiblin was always fast to consider others before herself. Geof Follansbee, Chautauqua Foundation CEO and Chautauqua Institution vice president, said Kiblin was the type of person to give someone the shirt off her back, no matter the weather. She was one to preserve both her friendships and the natural setting around her.

Diane Gattorno, Kiblin’s mother, saw that acute awareness of others and her surroundings start at an early age.

“When she was 10, she told me that if I brought Styrofoam to her birthday party, she wasn’t going to eat because that was not good for the environment,” Gattorno said.

Gattorno said her daughter was a woman of empirical experience, having no prior technical education or background in gardening, and starting to garden as a hobby. It might have been a surprise for Kiblin when she evolved her pastime into a career. But for her mother, in hindsight, it was less so.

“[The park] shows her true love, for the beauty, and how she put it all together,” Gattorno said. “She had such a natural gift. And I think that’s what people realize when they see it.”

Also present at the dedication was Chautauqua Institution President Tom Becker, who offered a few words about Kiblin’s legacy. He acknowledged her combination of art and science, value and substance. Swift to denounce any definition of the park as an accoutrement or frill of the Institution, Becker instead envisaged the site as a true place of protection, guarding both the people and the lake, promoting a sense of contact. But for all the celebration, there too was an ache and melancholy, one Becker saw as natural in the community’s recovery.

“There’s still a hole in our lives,” Becker said. “And today is a reminder of that pain. But it is also part of the healing process. And all that Ryan brought here, to us, will not end over time.”