In a School of Music master class at 10 a.m. Monday in McKnight Hall, eight singers (four male and four female) will perform a repertoire of composer Ben Moore’s songs and arias with pianists Bénédicte Jourdois and Martin Dubé. Moore will guide the students before an audience to fine-tune their performance.

Moore grew up in Clinton, New York, and graduated 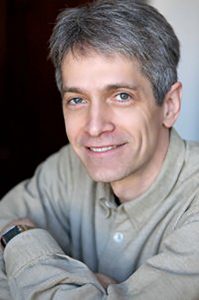 from Hamilton College. He is a graduate of the MFA program at Parsons School of Design, also pursues a career as a painter, and has been involved in the School of Visual Arts. His first opera, Enemies, A Love Story, premiered at Palm Beach Opera in February 2015.

“I first came to Chautauqua as a student in New York State School of Visual Arts, where high school students came from all over the state to participate in a summer program,” Moore said. “Then I came back to teach in the art program that they have every summer.”

Moore taught art at the Institution once or twice for a couple summers, he recalled, before Marlena Malas, chair of the Voice Program, hired him to teach.

Although a master class could be led by any accomplished musician, students and audience members can gain unique insights from different disciplines. With Moore, voice students and attendees will get the opportunity to learn by using his creations.

Unlike with many classical pieces, students will have the opportunity to work on music created by a living composer.

“There’s a certain advantage for classical singers to work with a composer who is alive who can give insight about what my intentions were when I wrote a song,” Moore said. “And also what I hoped for, imagined for and what emotions I was thinking of and how I want the musical phrases to build.”

Students and audience members will gain insight on the dramatic underpinnings of Moore’s music.

“It gives [students] a perspective that they would never get, obviously, working on Verdi or Mozart who we don’t have around anymore to ask them,” he said.

Moore said he will start by having each singer sing one or two songs from the repertoire, depending on how long it goes.

“I’ll have them sing the song or aria all the way through to begin with,” he said. “Then we’ll break it down and work phrase by phrase and give them advice about the musicality of it.”

After working on each piece, the students will sing everything through once again at the end, offering a rare opportunity to Chautauquans to see how professionals hone their art form, he said.

“The fun part for the audience would be that, hopefully, they will see an improvement as I give advice,” Moore said. “It’s all very spontaneous because it depends on how everything goes during the class.”

The people who come to Chautauqua, Moore said — especially the music programs — are generally very knowledgeable and not a typical audience.

“In years past, I’ve met a bunch of wonderful patrons to these concerts who not only love music, but in particular the classical singer and the classical repertoire,” Moore said. “They have a real appreciation for the kind of music we’re doing. And that’s a huge plus for a class like this. There may even be a way for them to participate.”