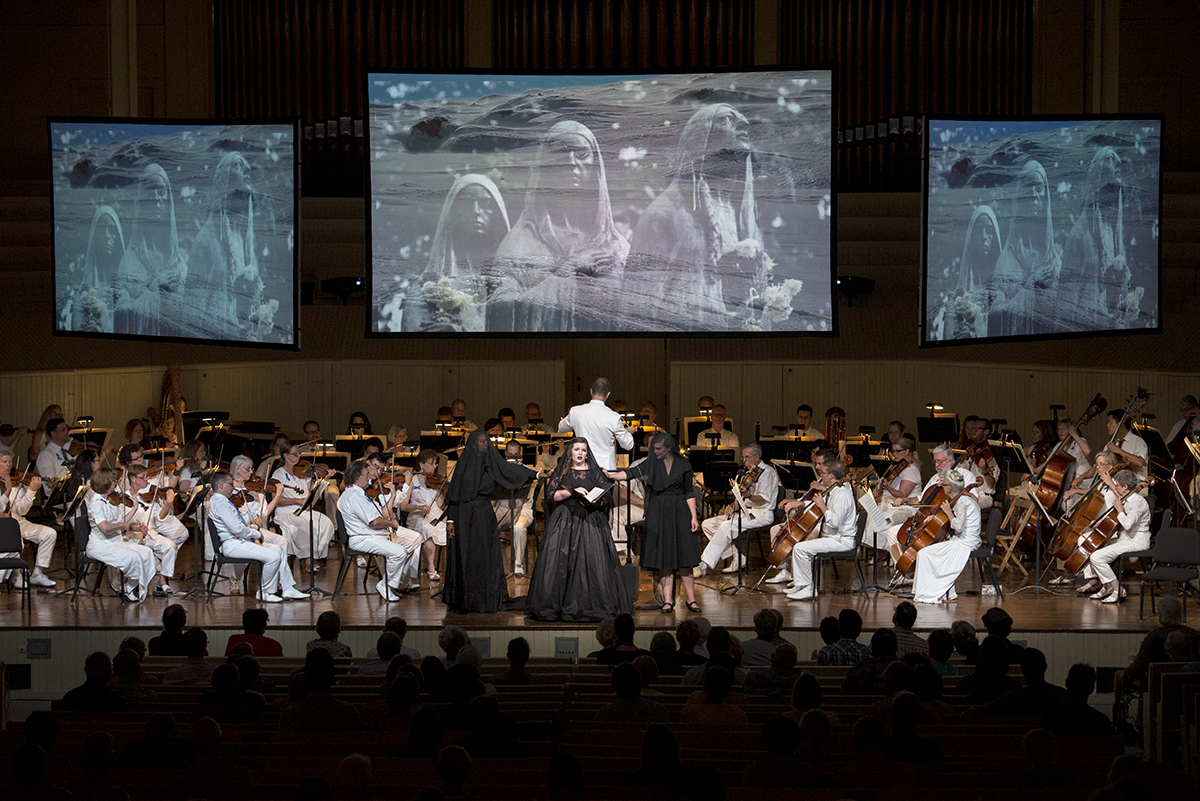 This is a tough one.

We start with one of the most respected symphonies of the 20th century by the late 20th-century Polish composer and educator Henryk Mikołaj Górecki. A spiritually beloved lament, his “Symphony of Sorrowful Songs” was his third symphony, first recorded in 1976 and first performed the next year.

The score charges orchestra to underline and contextualize in three movements three poems, each very different — the first, an expression of the despair of a devoted mother whose son is leaving for a cloistered monastery; the second, a prayer by an 18-year-old woman, scratched into the wall of her cell in the basement of the Gestapo headquarters in Poland with a supplication to the Blessed Mother; and the third, a mother’s cry to her son, likely dead during a time of war.

The musical setting is austere, building with a large orchestra from silence to sound, then slowly, after 13 minutes, introducing a soprano as if at first she is an instrument expressing a sadness of any situation, unmistakable, even without words.

1. The Use of Actors: The surprise drama of two women dressed in black and veils, one in long skirt and sleeves, the other’s costume shorter, with dress to the knees and top to the elbows. The man behind me commented as they walked reverentially down the middle aisle and onto the stage, that their costumes represented different orders of nuns in Eastern Europe. Once on stage, they separately improvised reverential gestures to the somber music and later read poems not included in the score. Their gestures were from the heart or toward the sky or outreaching or in the shape of a hand carrying a staff or of a blessing by Christ or a Muttra of the Buddha, which is the same hand shape of the number seven in American Sign Language for the deaf. The actors were not credited in the program, as were not the amateur photographers and filmmakers.

2. The Use of Still Image Projections: Black and white or silver-toned images emerged from darkness onto three overhead screens at a rate matched to the emergence and diminishment of the amplitude of the orchestra. Interesting close-ups of figurative sculptures likely in conjunction with graves or monuments mixed in with middle shot treatments often poorly composed and confusingly set pictures, as with the beginning image — the cover or lead image, one might say, of an angel’s wing slumped over top of a monument seemingly on a street. At first I thought the wing was a large fish. The use of projections is not called for in Górecki’s score.

3. The Use of Motion Picture Projections: Projections also included the vertiginous push and pull of waves breaking on the shore and then receding, synchronized with the breath-like alternation of two repeating chords from the orchestra. Then, with an indulgently long dissolve, the sea, filmed in color, broke down to be replaced with a single frame image of another statue.

4. The Use of Poetry Not Included in the Score: The ladies in black on occasion break in upon the orchestra to read poems as if voices from the orchestra. The readings often precede and follow the appearance of the soprano Kathryn Henry, a voice student, now continuing next semester at Juilliard. Her liquid voice, which as natural as can be, renders the three vernacular poems she sings as high art, her pacing and growth of an amplitude that fills the hall, or a pianissimo that is magically legible as well. None of the professional poems are from Poland, but all relate to grief, sorrow, isolation, awe-filled wonder, including those by Percy Bysshe Shelley, Edna St. Vincent Millay, W.H. Auden, Langston Hughes, aptly selected with diversity.

This bold new version of “Sorrows” should summon study and a deconstruction of the significance of imagery, actors and poems appropriated for use as superimposed art upon an intentional simple and transparent work created more than 40 years ago, and only enjoying popularity during the past 24 when Dawn Upshaw sang the soprano’s part in a recording with David Zinman in London. It sold more than a million in its first year of release.

Would the propriety of change and appropriation be different if the work enjoyed longer regard within the canon of spiritually connotative music; or if it was a remake of a less seriously considered piece? The history of art is one of appropriation, theft, modifications and tweaks.

Consider the British rewrites of Russian Classical Ballet in the 19th century; see Andy Warhol’s appropriation of photographs from remote sources famously without credits, remember Robert Longo’s last black and white repainting of masterpieces he admired in the Albright-Knox Art Gallery and other museums; and likewise his friend Cindy Sherman, who has been tinkering with the image of woman throughout her career. The Italian 20th-century painter Piero Dorazio and the Americans Sherrie Levine and Alfred Jensen each have worked their way into mature art, building from the voice of others. Tom Stoppard’s Rosencrantz and Guildenstern Are Dead gives its twist to Hamlet.

What are the ethics? Should the poet’s and the composer’s estate approve? Is that necessary?  Have the compassionate minds that admire “Sorrows” believe they bring something necessary to Górecki’s work that give it an amplified chance to succeed? Is there finer contextualization? Does the piece, after all, require additional media, whether word, or movement, or image, and do these additions add value, ennoble or clarify the original work when superimposed upon it?

These are serious additions to a powerful work, accepted by many critics and music directors and audiences, who show up in the marketplace for it. The audience in the Amp Thursday evening responded with spontaneous, standing and lengthy applause. That vote is heard.

Throughout the evening the orchestra played with superior command for delicate music. I have never heard a finer, more controlled work with masterpieces so easily breakable, and that includes especially the Górecki nuanced build from single instrument  to full orchestra, powerfully. And watching Maestro Milanov’s dancerly modest and smooth leadership, as if in an extended Tai-Chi pose with Górecki and the majestic flow of Bach’s “Sheep May Safely Graze,” with its own re-arrangement by Leopold Stokowski, two centuries later.

Anthony Bannon is the director of Burchfield Penney Art Center at Buffalo State College. Previously he was the longest serving director at George Eastman House, the international museum of photography and film. In 2012, he received the Johnson Award for criticism and history awarded by the Royal Photographic Society of Great Britain.

Webster and Warren Pick Up Radio Mantle at Chautauqua