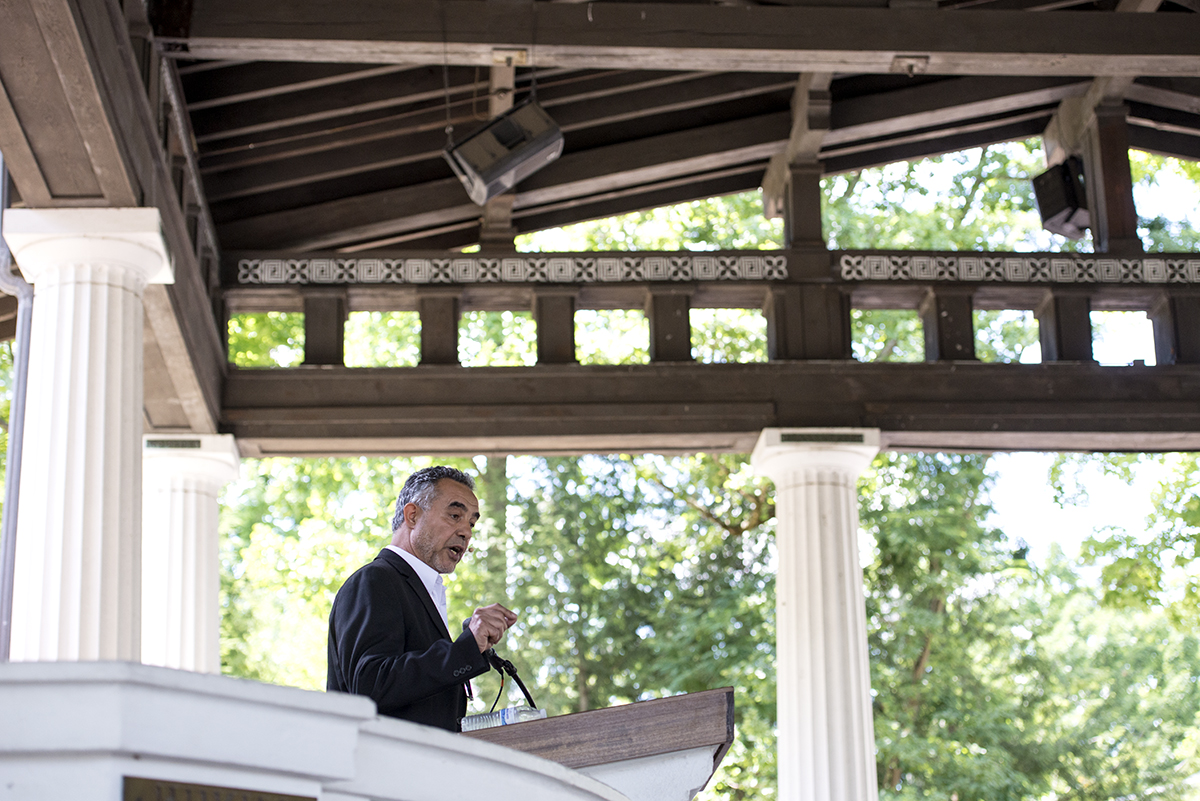 Freedom is in danger.

Modern freedom was a moral accomplishment created through sacrifice and adherence to strong values, Imam Abdulaziz Eddebbarh said, but it may soon crumble as humanity fails to make a second moral stand: saving the environment.

After Christian and Jewish perspectives Monday and Tuesday, environmentalist Eddebbarh delivered the Interfaith Lecture Wednesday in the Hall of Philosophy, exploring how verses in the Quran and other Islamic teachings command Muslims to protect the environment. He outlined the three principles that govern Islamic attitudes toward creation: multi-ism, trustworthiness and accountability.

As power has shifted away from religion, or at least from religion’s ancient injunctions against destroying nature, Eddebbarh said, the Earth has come under increasing threat.

“Our West-led civilization has been giving up the sacredness of nature,” Eddebbarh said. “As a result, the stewardship of our environment rest in the hands of two forces: human greed, which wants to exploit resources without restraint, and secular science, completely divorced from the divine.”

Eddebbarh called for Muslims to adhere to the three principles their faith says should dictate humanity interaction with the creation.

The first is multi-ism, Eddebbarh said, which teaches that there is a oneness between man and nature. If man harms nature he in turn will harm himself. He quoted Isaiah and Quranic verses that preach against the “corruption” of the land. Although English translations often use “corruption,” Eddebbarh said the Arabic word actually translates closer to “spoiling,” which could mean polluting. He noted that the term “Eyat” refers both to verses in the Quran and signs in nature.

“Concept of balance and harmony is crucial to this union,” Eddebbarh said.

The second and third principles, Eddebbarh said, are trustworthiness or trusteeship, and accountability. He noted the passage in which God commands the people of Tamir to give water to a she-camel that belongs to God, showing how creation is equally important as man. In addition to proscriptions on attacking women and children, Muslims are not allowed to cut crops, cut trees or poison wells in times of war. Killing of animals for sport is banned.

“The Islamic Judicial and Legal system is made up in rights, including the rights of creatures whose needs are to be upheld and balanced with the comforts of the human ways,” Eddebbarh said.

“Taken as a whole, Quran injunction intended harmonious relationship between man and the planet, as the human condition is not separate from the natural world but rather an integral part,” Eddebbarh said.

Finally, Eddebbarh turned to a fable called The Animals’ Lawsuit Against Humanity.

In it, a boat lands on an island where all the animals are living in harmony. The humans, however, begin to enslave and abuse the animals until finally the animals appeal to the King of Spirits, who orders a full investigation. He asks different animals for their opinions, including the nightingale who asks if all creatures have God’s gifts, how can humans claim superiority? Eventually the King rules in favor of the animals, finding they have been abused and mistreated too greatly. He orders the people to start treating the world with compassion.

“Should you err,” Eddebbarh quotes the Spirit King, “the animals will begin disappearing, one by one, from the face of the Earth and the air in your settlements and fortresses will become dangerous to breathe. The seasons will be reversed and your climate turned on end. The animals you eat will bring sickness and death and you will no longer lead the Earth.”