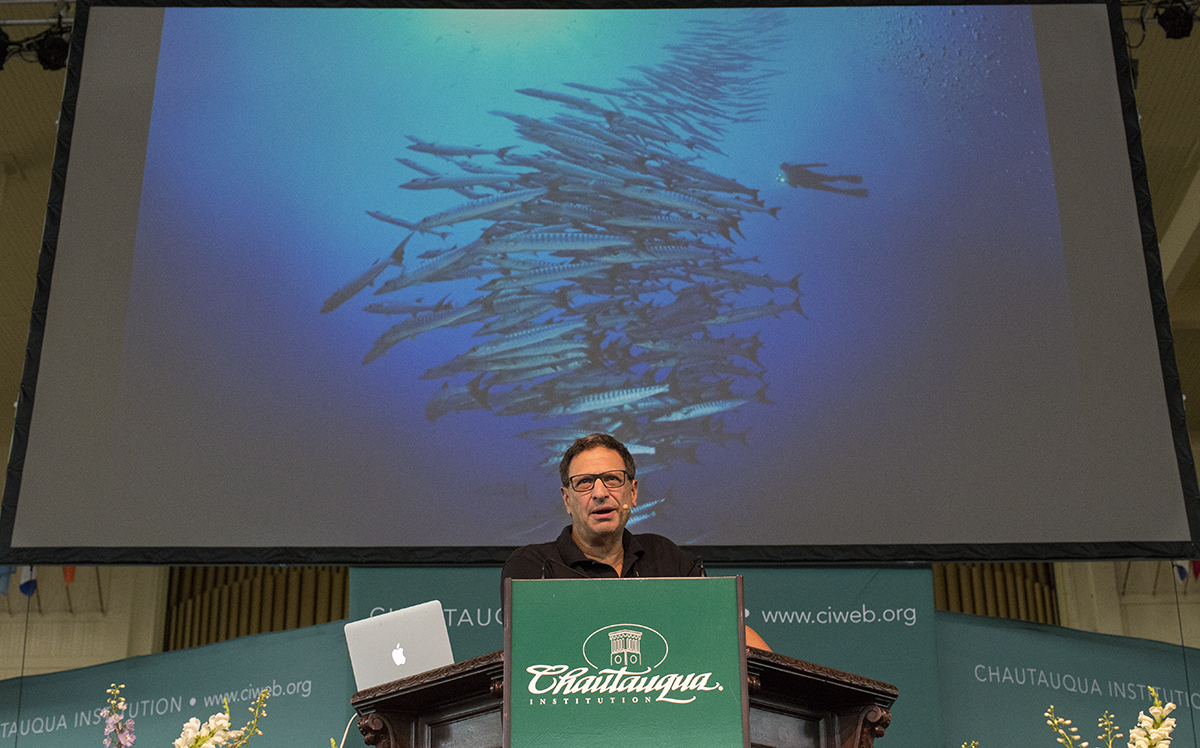 David Doubilet got his first look at the world beneath the water at 8 years old. He spent that summer at a camp in the Adirondack Mountains, where he was given a blue French water mask by his camp counselor to dive beneath the docks.

“I molded the mask to my face,” Doubilet said. “I put my head underwater, and my life changed. There, 8 years old, I knew where I was going, and what the world of water and the world of oceans meant to me.”

Doubilet, an underwater photographer, spoke about his experiences capturing the world below the surface and how the beautiful landscapes underwater are in jeopardy, during the 10:45 a.m. July 28 morning lecture in the Amphitheater.

At age 12, Doubilet began shooting pictures underwater with a Brownie Hawkeye. To protect the boxy camera, he encased it in a rubber anesthesiologist’s bag. The pictures came out blurry, but, since then, Doubilet has become a renowned photographer and has been published in National Geographic more than 70 times since his first assignment in 1971.

Doubilet said he aims to make people dream when they view his photographs of colorful reefs in the Indo-Pacific or the vastness of an underwater glacier in the Antarctic.

Eighteen years after his first visit to the reefs of Papua New Guinea, Doubilet returned on assignment for the 125th edition of National Geographic. He went to Kimbe Bay, which is in the far eastern wing of the Coral Triangle.

As Doubilet went back to Kimbe Bay, he remembered his last trip when he took a photograph of a diver swimming in the middle of a large school of chevron barracuda. Doubilet said his first thought was if the coral and the ecosystem withstood the test of time during those 18 years.

“Every single reef throughout our world is now threatened and endangered — endangered by rising temperatures, climate change, ocean acidification, habitat destruction,” Doubilet said. “But the reefs of Kimbe Bay were alive.”

Doubilet said the reefs survived simply because the population in Papua New Guinea remains relatively small at 7.5 million people. Less fishing has allowed the reef to flourish where larger nations such as Indonesia are depleting fish populations in the surrounding reefs.

“The operative word is ‘for now,’ ” Doubilet said. “These reefs are flourishing for now, but the Damoclean sword still hangs over them. This is the sword of climate change.”

Doubilet went to Kimbe Bay with the hope of encapsulating what the reef truly looks like in a single picture. The picture he ended up with featured a wide shot of the coral reef with a father and son paddling an outrigger canoe across the waters.

“The images that we make and print are vitally important,” Doubilet said. “Unlike Las Vegas, what happens in the ocean does not stay in the ocean. Climate change is entirely about water.”

Biologist Charlie Veron predicted reefs will completely transform in 30 years from what they are today. Doubilet said more than 90 percent of the coral in the Great Barrier Reef has been affected by coral bleaching.

“These are the reefs that we dream about,” Doubilet said. “This is the product of not only global warming, [but] coral bleaching. This is what happens when the water warms up, and the algae and the coral leaves. The reef dies.”

Doubilet also showed pictures of various sharks, including tiger sharks, silvertip sharks, hammerhead sharks and blue sharks. Sharks indicate that a coral reef ecosystem is healthy. Doubilet described blue sharks as “elegant and beautiful” as they maintain the population of fish in the ecosystem.

Though some countries have laws in place to protect these sharks — including Cuba and the Bahamas — nearly 13 tons of blue sharks have been killed in the Port of Vigo in Spain. The fins of these sharks are used for shark fin soup.

Doubilet said he and his wife explore more than just the tropical and warmer environments in the Pacific Ocean. They have also traveled to Antarctica to take pictures of animals like leopard seals, blue-eyed shags and harp seals.

The water reached 29 degrees, and Doubilet said diving underwater caused an “instant mother of all ice cream headaches.” He took pictures of the animals and the icebergs below the surface.

“An iceberg is the metaphor of the ocean” Doubilet said. “In other words, we see a little bit above, but most of it is below — unseen, unknown, entirely sculptural.”

Doubilet showed the audience a picture of a harp seal pup alone on an ice sheet. Smaller sheets of thin ice surrounded him, and Doubilet said climate change has created an uncertain future for animals like the pup who used to have hundreds of miles of ice sheets to inhabit.

“The sea ice beneath him is weak, soft — a product of a warming ocean and a vastly, quickly warming planet. He’s living on this little world, this little pad of ice.”

After the photo was taken, a huge storm blew through the area, flipping over the small ice sheets, which resulted in the death of a year class of pups.

“Of all the pictures that we’ve made in the ocean, this may really be a picture of climate change,” Doubilet said. “We’re really looking at a changing ocean, a rapidly changing ocean, and everyone here in this room are stakeholders.”

To Doubilet and his wife, the pictures they take have the power to make a difference and to convince people of the dangers of climate change. While the sea may look infinite with the vast oceans that cover Earth, it is actually a finite thing being destroyed by climate change and increasing carbon dioxide emissions, Doubilet said.

“The sea is finite, and the sea is fragile,” he said. “What we want to do is make images that make you dream, make you love this ocean, make you protect this ocean and save our planet.”

‘Meet the Musicians’ Brown Bag Has the CSO Teaching