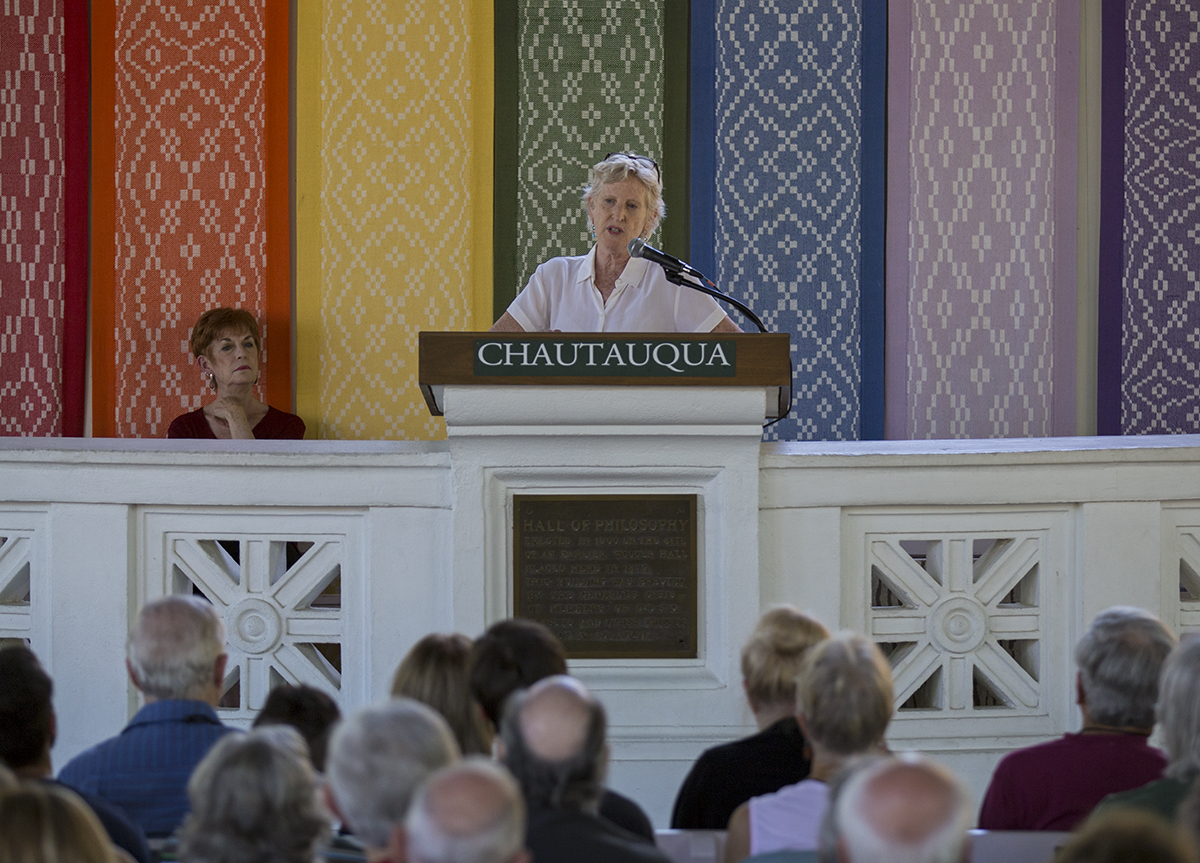 The West has lost God.

Not “lost God” in the modern sense that young people are leaving religion, environmentalist Rabbi Ellen Bernstein posited, and certainly not in the “America is being punished for its sins” sense. The loss Bernstein referred to is far more ancient.

Judaism and Christianity, Bernstein told the Hall of Philosophy Tuesday afternoon, have lost the God of Creation, and it’s the reason the natural world is now falling apart.

There are two Gods in the Bible, Bernstein said, the God of History and the God of Creation. The God of History is the one who spoke to Abraham and brought the Israelites out of Egypt, Bernstein said. He is the common image of God found in churches and synagogues, and encapsulated in his name, “Adonai” or “Lord.” The God of Creation is the God of the creation story, the one the Bible describes as “Ruach Elohim,” or “the spirit of God,” Bernstein said, with his attentiveness to the natural world. His name is “HaMakom” or “place,” reflecting his presence in every place on Earth.

The latter expression of God, the one Bernstein has always felt connected to, has always been overlooked in comparison to the God of History, she said. Yet Bernstein said she found the God of Creation most present in the first passages of the Bible. Not only does God embody and create the natural world, Bernstein said, but he sets in motion the creation of habitats and ecosystems. He does not create plants and trees, but rather commands the Earth to fulfill its purpose and grow such flora.

“Once habitat takes shape, plants, swimmers, flyers and crawlers emerge — If you build it they will come,” Bernstein said, quoting “Field of Dreams.” “Progression echoes the sequence of evolution.”

Centuries later, medieval Jewish philosopher Maimonides said the Hebrew word for land, “Aretz,” implies growth. Bernstein combined this interpretation with the creation story to argue that the Bible asserts the Earth is alive, comparing the Bible’s views to the Gaia hypothesis. People’s inability to recognize that, Bernstein said, allows them to pollute with impunity.

Bernstein then turned to God’s declaration that each step of creation was “tov,” or “good.” Some people interpret the “tov meod,” or “very good,” that God declares on the sixth day to refer only to humans, but Bernstein said God is speaking to all of creation. She quoted Maimonides that “very good” refers to ability for all creation to fulfill goodness then and for all time, a lesson she said modern humans should heed.

“Ecologically speaking, creation’s very goodness is the blueprint for sustainability of all life for eternity,” Bernstein said.

Bernstein turned to verse 1:28 of Genesis. Environmentalists like Monday’s speaker Karenna Gore have pointed to the verse, in which God gives Adam “dominion” over all creation, as a scourge that wrongly justifies destruction of the natural.

But Bernstein said this is a false interpretation.

She turned to the medieval Jewish interpreter Rashi, who argued that “dominion” meant man had to rule well, and she interpreted verses in Genesis 2 to argue God commanded man to actually serve the land and its creatures.

Yet leading Jewish thinkers have intentionally tried to suppress the influence of the God of Creation or remained ignorant of its importance for centuries, Bernstein said, leading to the devastation humanity faces today. Early rabbis lamented that the Torah started with the creation story and not with Abraham, the first Jew. Bernstein said Yehudah Halevi, another medieval Jewish philosopher, saw the distinction between the God of Creation and the God of History but called the former insignificant in comparison to the miracle-working latter. Ancient Greek philosophers drew the same dichotomy, Bernstein said. They took Halevi’s side.

Bernstein wants to revive this God of Creation. She called for people to embrace what she called a fuller idea of God as not just as Adonai, but as HaMakom, an essential part of creation. She argued that God rests in the affinity people feel for a place that’s close to them, what Bernstein called the sixth sense.

Remaining rooted in that particular place is essential to being, Bernstein said, a motif that spreads throughout the Bible. Adam and Eve are tied to the Garden of Eden and Abraham is promised and tied to the Land of Israel. Bernstein said some rabbis interpret the Torah as a story of two mountains: Mount Zion, the site of creation, the Binding of Isaac and Solomon’s Temple; and Mount Sinai, the site of the Burning Bush, the Tabernacle, the Golden Calf and the giving of the Torah.

“The Earth is not a storage vault we can exploit forever,” Bernstein said. “Offenses against the Earth are offenses against God. We need to embrace a more full-bodied Judaism and Christianity.”