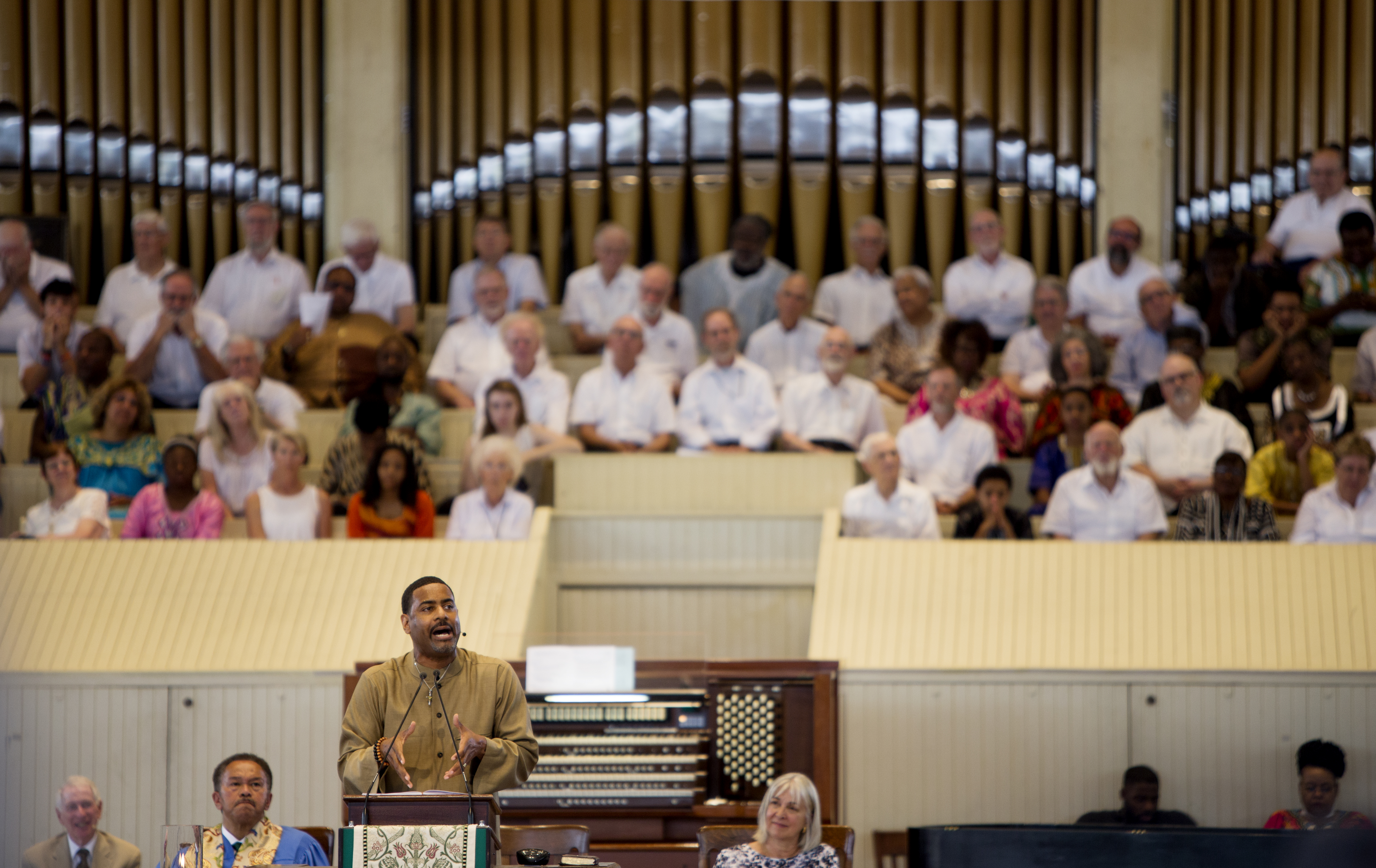 “America has a grand record of AP courses on how to hate other people out of the human race. The ‘pseudo prophets’ in name show where their true faith lies and the church has failed to speak love in the midst of hate,” said the Rev. Otis Moss III at the 9:15 a.m. Wednesday morning worship service. His sermon title was “When the Church Decides to Repent (Part 3): Rainbow Redemption,” and the Scripture reading was Isaiah 56:1-8.

“After Orlando something moved in my spirit, this tragedy that killed people as the result of hate came almost a year to the day after the tragedy in Charleston, South Carolina. There was hate based on orientation, there was hate based on race and in Chicago we have gun violence based on self-hate,” he said. “Yet, the house built on Jesus would rather serve hate than love; it is a one-note musician who says you are not included.”

Moss said he knew what it was like to be excluded.

He called the prophet Isaiah “a smooth brother who understood the Torah well.” Isaiah told the people of Israel that their job was to maintain justice and it was God’s job to offer salvation.

“It is not the job of the preacher to offer salvation; justice is our responsibility. We can’t deny salvation to anyone,” Moss said. “Jesus boiled it down to ‘love God with all your heart and soul and mind and your neighbor as yourself.’ For Isaiah, that means the immigrant and the eunuch.”

Isaiah reminded the people of Israel that they had been immigrants and that immigrants are part of the family of God.

“People try to build walls to keep you out,” Moss said.

But inclusion does not stop with the foreigner; eunuchs are included also. The religious community tried to keep them out because their genitals had been damaged, removed forcibly or were missing at birth.

“Just because you are different does not mean you are deficient,” Moss said. “Radical inclusion is what God wants, a heterogenous society of all homo sapiens, not a homogenous society.”

It is not a sin to be an immigrant or a eunuch, he said. We are all equal before God and it is when we try to create a hierarchy that we are in trouble.

“America has trouble with radical inclusion. We like cliques, small committees. God’s love means radical inclusion and it means radical remembrance. We can’t have romantic notions about the past. I have a question when someone says ‘Make America Great Again.’ What year are you talking about?” Moss said. “Are you talking about when women could not vote, or segregation, or slavery or the Trail of Tears? If you would make America great again, do you want me to be three-fifths of a person and serve without pay? I have a question in my mind when you say ‘great again.’ ”

We should be talking about making the “Yet to be United States of America,” he said. “We can build upon the past, learn from yesterday but include all who are part of this great republic.”

Anyone can find exclusion in their family history, if you look for it, and when you find it, you will change the way you look at the present, he said. We need to build coalitions with those who have been excluded.

“We need to stop acting as if there are no LGBTQ people in our churches or in our families. Please stop. I want to give a major shout-out to those who still came to church and praised God while they were being cursed out from the pulpit,” he said. “The same God who made me, made Langston Hughes, made James Baldwin, made Audre Lorde, made Bayard Rustin, made Zora Neale Hurston. The same God who blessed them blesses me.”

Moss called this kind of inclusion a “rainbow redemption.” It is by deliberate refracting of light that we see all the colors in the light and we don’t see those colors until the light is broken apart.

In spite of a church of hateful holy rollers, he said, “I still serve the God who can’t write or close me out. Whatever letter you put in front, put the same respect on the person’s name. Put COG, Child of God. Believe in the God who believes in the rainbow redemption.”

The congregation was again on its feet and applauding.

The Rev. Ed McCarthy presided. Evadne Giannini, founder and managing consultant at Hospitality Green in New York City, read the Scripture. The Motet Choir, under the direction of Jared Jacobsen, organist and coordinator of worship and sacred music, sang “Like as The Hart Desireth the Waterbrooks,” by Richard Nance. The Gladys R. Brasted and Adair Brasted Gould Memorial Chaplaincy provides support for this week’s services.