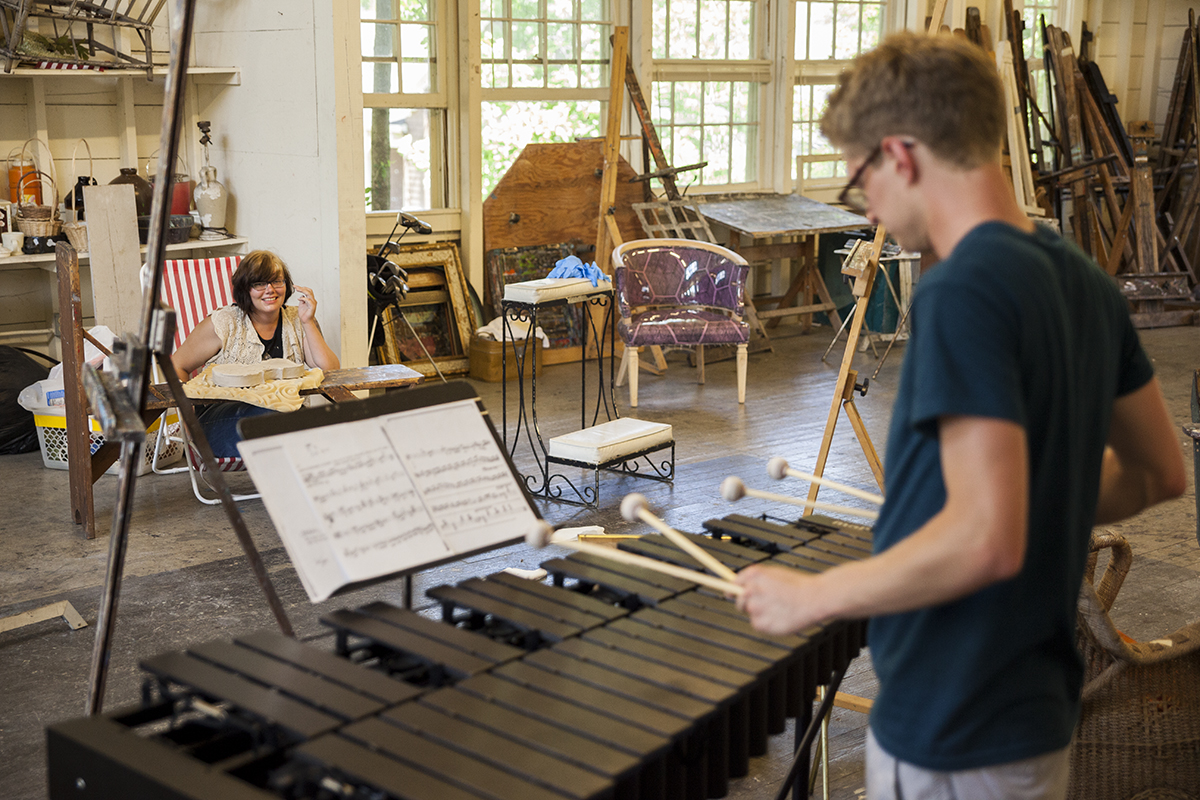 Musicians, dancers and visual artists come to Chautauqua to hone their craft and work on their technique. But is mastery of a single discipline possible without inspiration from others? For the young professionals of the Chautauqua Inter-Arts Collective, experimentation and exploration is an integral part of their education.

In a one-of-a-kind concert at 7 p.m. Sunday at McKnight Hall, students across the Schools of Fine &  Performing Arts will collaborate for a unique and more experimental performance than what traditionally takes place on the grounds — with an overarching theme of social justice.

Julian Loida, a percussionist in the Music School Festival Orchestra, has been organizing and guiding the program for “Zeitgeist” for only a couple weeks. He said that a similar endeavor pursued last year, but the 2016 inter-arts concert has some key differences. Chief among them is that it’s student-run.

“This really is the spirit of Chautauqua, artists bringing this up from their own juices,” said Oliver Dow, managing director of the School of Music. “It just couldn’t be done anywhere else.”

When Loida spread the word about the collective, he was surprised to see that within a half an hour, more than 10 students expressed an interest in getting involved. Now, with a growing number of about 25 students, there is a full program of pieces that will include original work, improvised dance, poetry and visual art.

“I was expecting maybe five people. As we move forward, it’s more and more with the dancers and painters,” Loida said.

He described this concert as something outside the summer programming, not even extracurricular, but something different entirely. His major piece, “MLK Day, Ferguson Strong,” includes projections of his own photos taken in Ferguson, Missouri, spoken word and music.

Singer Amanda Brooks, along with a percussionist, trombonist and violist will perform her own rendition of Beyoncé’s “Freedom.”

Loida will also play “Living Room Music,” which is a percussion quartet by John Cage. It’s a performance art piece that uses everyday utensils to turn a living room into a musical performance space.

The finale, called “Coming Together,” is a 20-minute piece with eight people and a speaker. The text, Loida said, is a letter from prison written four months before what ended up being a rebellion from inside the prison walls.

“That’s a big part of being a young person today,” he said. “You can’t ignore the injustices in society, so I think when people get together to put on a concert, even if you didn’t have these MLK pieces or ‘Freedom’ by Beyoncé just the music speaks to people.”

With an overall tone of social justice, Loida said he hopes that if he is moved by the programming, the audience will be, too.

“Society does not give all of us equal rights, as we see,” he said. “That’s something that I care a lot about, and I think I saw in my colleagues that they care a lot about it, too.”

Dancer Ashlan Zay, accompanied by students John Miller and Anthony Schweighardt, will perform an improvised dance to “Spiegel Im Spiegel” by Arvo Part, which will be played by pianist Kyle Johnson and violinist Marisa Votapek.

Zay said normally when the dancers perform, they have a rigid choreography, so they know exactly what steps to do and when. But for this piece, things will go a little differently.

“Now, instead of being told what to do and when, we are only told how to make the quality in our movements,” she said. “There isn’t any choreography given so we don’t know what we are going to be doing even seconds before it happens. Every time we do the piece, it becomes something new and unique.”

In preparation for the concert, musicians played pieces from their repertoire Thursday afternoon in the Arts Quad, to inspire artists while they create paintings and sculptures. Those pieces, Loida said, will be on display at McKnight on the eve of the concert.

Using a vibraphone in the drawing room at the art quad, Loida played “Dream” by John Cage, while Alex Myers, an art student working on a porcelain piece to be displayed at the concert, made intricate adjustments to her sculpture.

She said even though her pieces will not produce sound, she wants them to look like they could.

“I’ve been working with the imagery of violins for a while, and I’ve been looking to collaborate with musicians,” Myers said. “I think of a violin as a sort of figure or bust. They resemble human resonance the most, to me. They are audibly like our vocal chords.”