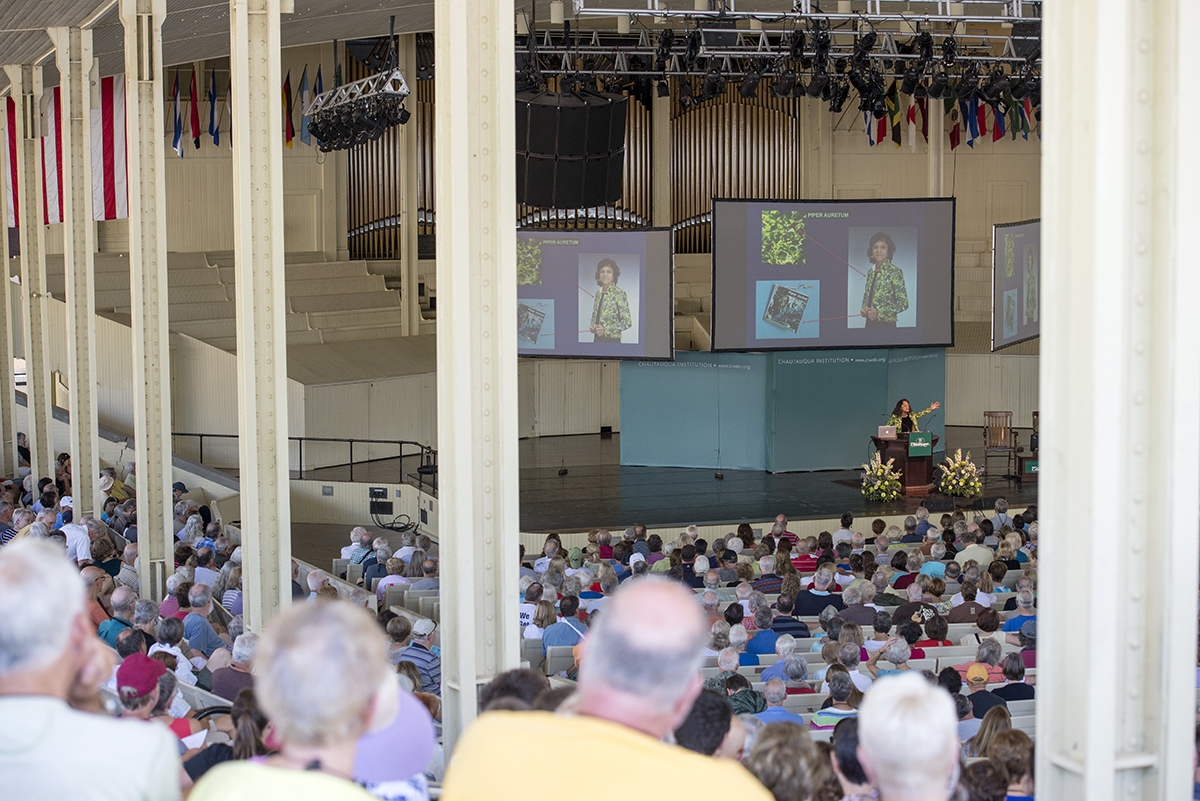 Forest ecologist Nalini Nadkarni believes life is like a tapestry — all different values and beliefs can be woven together to create a bond between nature and society.

Nadkarni, a professor of biology at the University of Utah, spoke about tree canopies and the connection between nature and other aspects of society during the 10:45 a.m. Tuesday morning lecture in the Amphitheater.

“Chautauqua tries to weave together the separate threads of arts, of sciences, the humanities, of education and the spiritual realm to create an understanding and to inspire action,” Nadkarni said. “Anything can be woven together.”

Nadkarni first believed in that idea after witnessing it firsthand through her parents. Her father immigrated to America from India to work as a scientist, and her mother grew up in Brooklyn and was of Russian descent. With four siblings and a mix of cultures, Nadkarni described her childhood as a tapestry woven together to create her unique family.

As Nadkarni began to explore tree canopies in Costa Rica, she made the connection between the tapestry her parents wove to connect their family and the tapestry she needed to weave, as a scientist, to connect the world with the environment once again.

When National Geographic asked Nadkarni to speak, they asked her to answer a question: “How do we survive in a natural world with which we are increasingly out of touch?”

Nadkarni answered that question as a young scientist when she founded ICAN, which stands for the International Canopy Network, in 1996. ICAN seeks to connect the environment to human values including recreational, aesthetic, spiritual and social justice.

“I can’t stop the chainsaws,” Nadkarni said. “I can’t stop the consumerism. I can’t stop many of the factors [or] the policy decisions that were made at a very high level, but perhaps I can help through education of other people about the importance of these forest-dwelling creatures.”

Nadkarni quickly realized the main audience of the articles and lectures she was giving already cared about the environment and protecting nature. She, along with her graduate students and colleagues, had to find a way to reach those who were not already educated on those topics. She used a little girl growing up in New York City without immediate connection to trees and grass as an example.

To reach that audience, Nadkarni created TreeTop Barbie. Though Mattel was not interested in that idea, Nadkarni and other volunteers created their own version of the Barbie doll. Sporting a blue helmet and orange hiking boots, TreeTop Barbie was designed to encourage young girls and boys to be active and explore the natural world around them.

“So Barbie has become an ambassador to those who might buy the Barbie for their 6-year-old daughter or cousin or niece to bring the word of the importance of forest canopies … to a new generation of young girls,” Nadkarni said.

With the release of the TreeTop Barbie, ICAN began its mission through the recreation pillar. That continued with the aesthetic pillar as Nadkarni talked about her idea of taking a biologically accurate pattern of a plant and printing it on fabric to create a fashion line.

She gestured to her own jacket, which was covered in green leaves. The jacket was an authentic representation of a piper auritum.

“We, if we think creatively and innovatively, can start weaving together the values with the respect of that part of society with the ecological values,” Nadkarni said.

Nadkarni also looked into the importance of trees in spiritual texts for a variety of religions including Christianity, Hinduism and Judaism. She found 328 references to trees in the Bible, with two very important trees found on the first page of the Old Testament — the tree of life and the tree of knowledge of good and evil.

Through her research, Nadkarni was able to visit churches and talk about the connection spirituality has with texts through all religions. ICAN also did tree mapping, which showed trees in the local area to a given denomination and how those trees are connected to their religious texts.

The final pillar of ICAN’s mission was social justice. Nadkarni created a program where she and her graduate students went into prisons and taught them how to farm moss, a plant that was being ripped from its ecosystem to be sold in horticulture shops.

Nadkarni said through her research with tree canopies, she learned canopy plants such as moss grow very slowly once removed from their natural habitat. Those types of plants are also extremely important to the ecosystem they live in.

Her studies found 33 percent of animals that interact with the canopies interact specifically with the plants growing on trees rather than the trees themselves. Canopy plants are used for eating, drinking and as nesting tools for the animals in the ecosystem.

“Prisoners, although they have committed terrible crimes and they’re committed things that we don’t want them to do, they are deprived of nature,” Nadkarni said. “They are kept away from nature for whatever the length of their sentence is.”

Within 18 months, ICAN, with the help of the prisoners, discovered the fastest growing moss and were able to cultivate that moss instead of ripping it out of the wild.

Nadkarni said the prisoners enjoyed the activity so much they requested to learn more. Speakers began to visit the prison for monthly scientific lectures. Beekeepers visited the prison to show the men how to make honey. A recycling program was initiated on the grounds.

“They felt a connection, an interweaving of themselves and their work with preserving something that was very important,” Nadkarni said.

With the success of the social justice project, Nadkarni decided to do a study on those in solitary confinement at the prisons. Nature videos were projected on the wall by a cellblock for inmates to view.

The study found the block that had the nature video had 26 fewer violent infractions than the cellblock without the video. Having access to nature reduced stress, anxiety and violence in the inmates who viewed it.

“Although this is not, at all, solving the problem of mass incarceration, it does bring some light to the darkest forms of imprisonment,” Nadkarni said. “It recognizes the power of nature on the nature of humans, and that, for this violent world, it provides a small but very real portal to peace.”

“When you look at [the human heart] just right, you see rivers and tributaries of rivers, but you also see the branches and twigs, the dendritic form of trees in our hearts,” Nadkarni said. “When we connect with trees and with other parts of nature that are important to us … we are connecting with the deepest and the most important part of ourselves.”